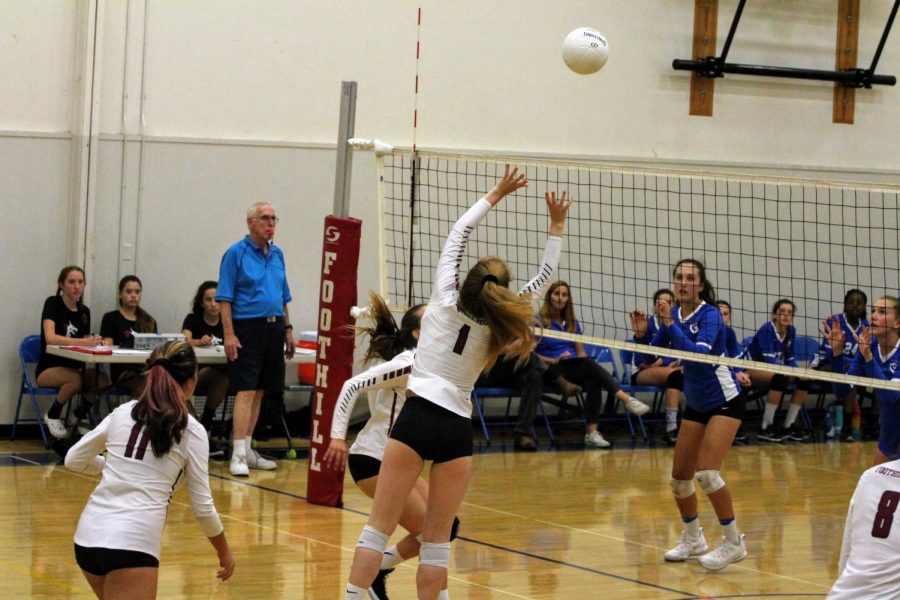 Fae Armstrong '21 with a strong set

The Cabrillo gym was full of spirit on the night of Sept. 12 as fans settled in to watch the game. The tension between the Foothill Tech Dragons and the Cate Rams was high as they stepped onto the court, and both teams knew the game would be a battle from the start. In their first league game, the Dragons met their match and while they fought hard, Foothill faced a heartbreaking loss in five games.

The Dragons started the game with an ace off of a serve by setter Fae Armstrong ‘21. The score varied until a tough dig from Ashley Pazen ‘20 tied up the game, putting the score at 5-5. Cate battled hard, but the Dragons contested the Rams’ power, putting themselves in a one-point lead that instigated the opposing team to call a timeout. A serve from Dylan Mullaney ’21 put the Dragons ahead once more, ending the game with a score of 25-19.

Both teams entered the second game confidently, and the score remained steadily balanced up to a tie at 6-6. The Rams’ aggressive serving earned them a four-point lead, and the crowd began to lose hope. As Karina Arinello ‘20, stepped up to serve, the Dragons gained momentum and brought the score up to 19-15. In a state of panic, Cate called a timeout in an attempt to get back in the game. The Dragons remained confident, but Cate managed to catch up leaving the score at 24-24. After two solid serves from Armstrong, Foothill secures game two, 26-24.

With two straight wins under their belt, the Dragons entered the court positive that they would come out with the win. It started out with a strong serve from Mullaney to push the Dragons ahead 1-0, but after the Rams side out, the Dragons lost momentum. Coach Kris Gullatt called a timeout at 2-7, with Cate ahead by five points. Foothill struggled to stay in the game and ended with a tough loss of 17-25.

With the Dragon’s spirits dampened, the fourth game ran similarly to the third. Cate overpowered Foothill with solid swings out of the middle, but a turn of events brought the game back into their grasp. Several decisive and long rallies tie up the score, 24-24. At this point, either team only needs two points in order to get the win. If Foothill could have pulled this off, they would have ended the match with a 3-1 win. With the crowd at the edge of their seats, the score closed out at 27-29, with the Dragons falling short.

While either team could have taken the final game based on their skill set, the Dragons were worn out and discouraged. In the beginning, it seemed as though the game could go to either side, but the Dragons were not able to pull it off, losing 12-15.

The Dragons dolefully returned to the bench in face of defeat.

“This was definitely a really tough loss, we were having trouble executing and we definitely should’ve pulled out the win,” Armstrong said.

Although they faced a heartbreaking defeat, the team knows what skills they should be working on. “I hope as a team we can learn to start strong and finish strong and stay consistent throughout the whole game and not let ourselves drop,” Pazen said.

The Dragons will have their next league game at La Reina High School against the Regents on Sept. 19.