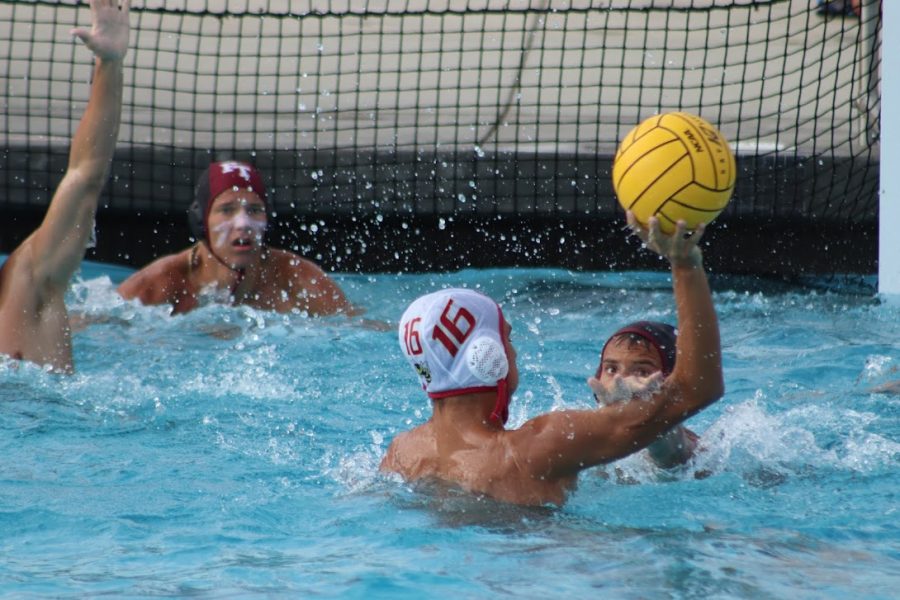 The evening of Sept. 9, 2019, was serene, and the water in the pool rippled calmly. The energy at the Ventura Aquatic Center was quiet and focused; the Dragons stoically preparing for the game ahead against the Oxnard Yellow Jackets. Their fans, however, maintained their usual high energy. It was a cooler breeze than normal for locals in Ventura, but it made the temperature that much more comfortable to enjoy the game.

Prefacing the game, players from both teams came together in the center of the pool and formed a circle in a moment of silence. The game was dedicated to a member of the Oxnard Yellow Jackets water polo team, who recently passed away.

The first quarter began with the Dragons’ Jake Anders ‘20 winning the starting sprint, followed quickly by the first goal of the game scored by Jack Ryan ‘21. After this initial head start, both teams turned the ball over for several possessions before the next goal was scored in favor of the Dragons by Nikolai Haines ‘20. Over the course of the quarter, the Dragons kept the Yellow Jackets scoreless as a result of many goal blocks by Max Canby ‘20, and widened their lead with three goals from Haines to end the quarter with the Dragons up 4-0.

Ryan highlighted that the Dragons “spread out pretty well, and we were running a lot of good plays and picks”.

The second quarter was kicked off by Alex Jannone ‘22 winning the possession for the Dragons off the ball drop. Though the quarter progressed slowly, the Dragons managed to put in one more goal through the collective teamwork of varsity rookies Brandon Rogers ‘22 and Donavan Hart ‘22. The overall uneventful quarter ended with Dragons still up 5-0.

The Dragons’ main sprinter, Anders, earned yet another possession off the sprint to start off the second half. The Dragons started off strong with a goal off a redirection by Drake Kennedy ‘20, but the momentum was short-lived. Oxnard scored their first goal of the game, sobering up the Dragons to bounce back with two consecutive goals scored by Haines and Joey Bishop ‘21, respectively. A few possessions later, the Yellow Jackets pushed their offense, and after one unsuccessful run, redeemed themselves with a goal.

Coming back from a quick timeout, the Dragons seemed a bit shaken as the Yellow Jackets scored yet again through a gap in the defense. The Dragons were able to push through and end the quarter strong, with a goal scored by Evan Bouchard ‘21. At the conclusion of the first 24 minutes, the score was set at 9-3, Dragons with the lead.

The final quarter started out rocky for the Dragons; for the first time all game, the Yellow Jackets won the opening sprint. Oxnard’s possession ended in a goal attempt, which was shut down yet again by Canby’s quick reflexes. The rest of the quarter was a switch-off of ball possession between both teams, not achieving much besides a penalty or two, until the very last minute of the match. Haines had the ball in a position to take a shot, but cleverly tossed it to an inside player, Arlen King ‘21, who tipped it into the goal for the final point of the day, locking down the victory, with the Dragons victorious 10-3.

Canby mentioned that in future practices they would need to focus on, “a lot of just discipline, because I mean we’re all over the place, once we can get ourselves all on the same page we’ll click better, it’ll be easier to run plays, we can start getting more goals and isolations.”

The Dragons hope to keep up this game-winning momentum for their next game on Wednesday, Sept. 18 against the Camarillo Scorpions.