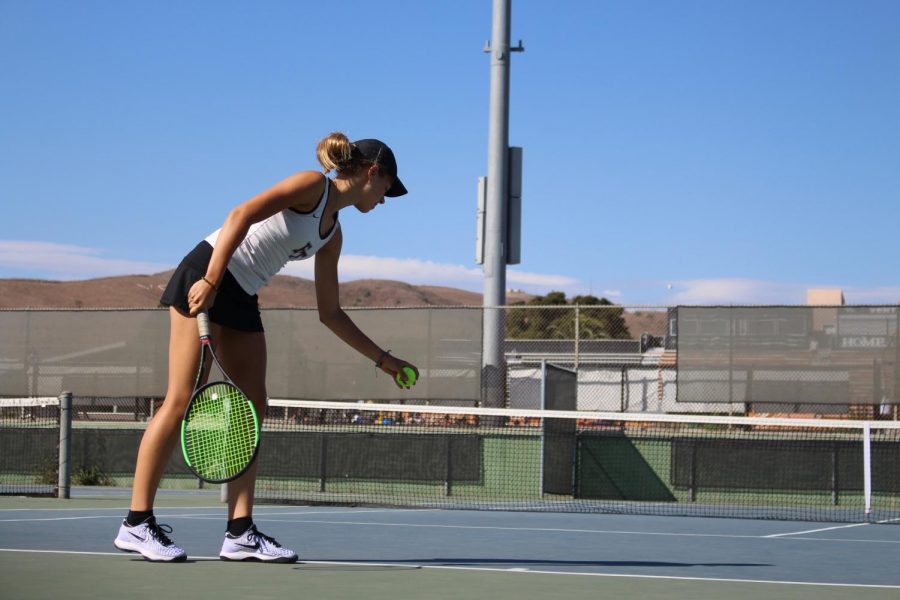 Noelle Hayward '21 getting ready to serve the ball

The hazy late-day heat of Sep. 5 seemed only to encourage balls to fly over the net to aid girls’ tennis to win game after game, securing a 13-7 victory against Pacifica High School. Their first three matches of the season have left the team with three wins under their belt, showing a promising start to the year.

Foothills’ singles and doubles teams comfortably took the competition on the Ventura College courts. Compliments were exchanged between teammates and opponents, while encouraging words flew across the net.

After losing former-senior and powerhouse Erin Gaynor ‘19, the singles team brought an impressive game and stepped up to the job, giving away just one set out of the nine played. The lineup consisted of Clare Duganne ‘22, Noelle Hayward ‘21 and Ella Duganne ‘20.

Clare Duganne, a second-year player, started out with a loss.

The set lasted a long time and points weren’t given easily. The sound of shuffling feet accompanied calls of “add-in” and “add out” as each girl held their own.

Ultimately, Clare Duganne lost 1-6 in an aggressive rally that one spectator remarked to be “the best point of the match.” However, in the following two sets, Clare pulled it together and swiftly ended with her own strong scores of 6-1 and 6-0.

“I definitely struggled with my serve,” Ella Duganne says, regarding her gameplay in the last set; “my last match was definitely the closest.”

Completing the crew, Hayward systematically picked off her opponents. In the blazing heat her bright green racket was indistinguishable from the balls she hammered across the court, ending each of her sets in a consistent 6-0.

With the singles battling it out on one side, Pacifica’s doubles team came out with a strong technique and strong willpower.

The number one team managed to bring their match home, however, leaving with 6-1, 6-0 and 6-0 as their scores.

Doubles team Ruby Beckendorf ‘21 and Leah Sehati ‘20 secured the final point for the Dragons, winning 7-6. Previously losing 3-6 to their number two opponents from Pacifica, the girls “turned around and beat the number one team at the tiebreaker,” said coach Brad McClain, who is “very pleased.”

With the season getting underway and league matches starting in just under three weeks, McClain states that they have “got some work to do, and I intend to take full advantage of having a couple weeks off here to try to clean things up.”

The girls file off the courts while the heat of the day wears off. With an end goal of beating Cate High School, who has dominated for the past three years, the next few weeks of training will be to “find out how good they are and how much better we’ve gotten” says McClain.