Boys’ water polo edges over Bulldogs in their home pool 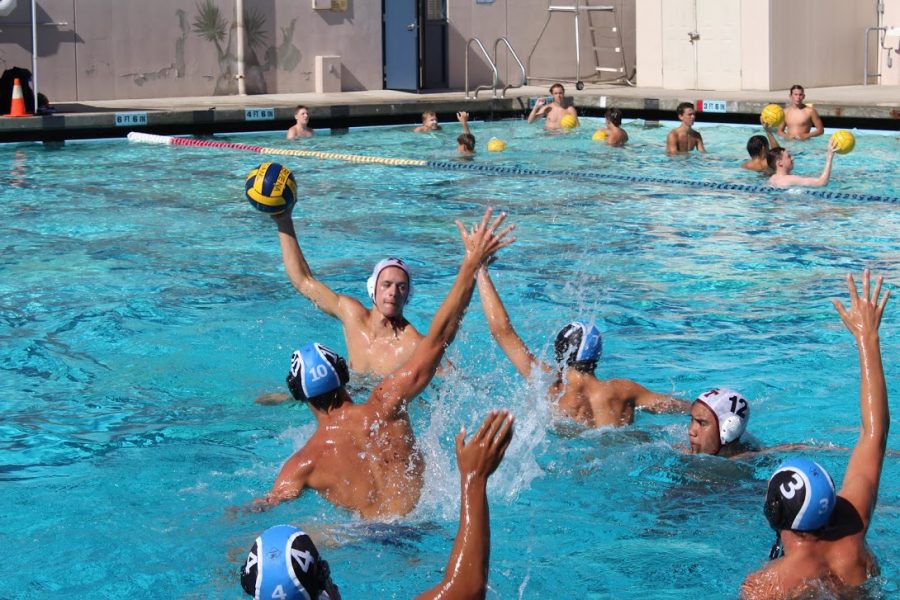 The boys’ water polo team continued their history of victories against Buena High School in an energy-charged match on Aug. 29. The away game at Buena was by no means taken over by Bulldogs; Foothill fans were storming into the bleachers as the first whistle blew, excited to cheer on the Dragons. Backed by all this support, the boys secured a 5-3 win, finishing strong.

The Dragons were hungry from the ball drop, with Alex Jannone ‘22 snatching the ball off of a sprint and passing it back to Jake Anders ‘20. The ball progressed down the pool, traveling to Jack Ryan ‘21, and then to Nikolai Hanes ‘20, who pulled off a backhanded shot through multiple defensemen to put the first goal on the board, 1-0 in favor of the Dragons.

The first quarter continued in the same manner, with countless blocks on the backend from the wide reaches of goalkeeper Max Canby ‘20.

Due to smooth passing and a patient offensive strategy, Hanes scored his second goal of the day. Supported by strong defense from Joey Bishop ‘21, the Dragons were able to stay aggressive on offense and Hanes earned a breakaway through his calculated positioning. Hanes sprinted down the pool for a one on one, but was deflected by Buena’s keeper. He snatched the ball off the water and it found its way to the back of the net, putting the Dragons ahead 3-0 to end the first eight minutes.

The Dragons took the pool with the same aggression in the second quarter, which resulted in a quick shot for John Higgins, which skims the top crossbar, just out. The Bulldogs countered and caused a commotion among the Dragons’ defensive line. Despite Canby’s attempts to reorganize his backline, the Bulldogs managed to put a goal on the board. Quickly after, the Dragons struggled to clear the ball from their side of the pool. A defensive foul awarded the ball to the Bulldogs, who quickly moved the ball for a wide-open shot, nearly leveling the playing field at 3-2 in favor of the Dragons.

Higgins credits this lapse in ability to shut down the opposition to the fact that “Buena definitely has a lot of very skilled players.”

With the start of the second half underway, the Dragons stay strong despite fatigue. Higgins remarked that it was “definitely tiring […] we were all tired by the end of the game because we didn’t get much subbing” As a result of a foul on the Bulldogs, Hanes was awarded a penalty shot, which sneaks its way past the active hands of Buena’s goalkeeper. With a lead of 2, Buena is hungry for an attack and storms the Foothill defense. With the fans on the edge of their seats, Canby makes three exceptional blocks, ending the third quarter.

The tip-off of the last quarter started with Hanes making an exciting breakaway. The Buena keeper is ready for the fight, blocking his first shot. It was rebounded by Ryan, but the keeper blocked it yet again. Hanes picked the ball up in a position to shoot, but the Bulldogs were not ready to give up. The hectic play ended with Buena regaining possession. The opposing team, ambitious for the win, slips in another goal, but unable to pull it off, ending the game with a score of 5-3.

While Hanes knows that they still “have a lot to work on and figure out,” Higgins is excited to do so, motivated by his enthusiasm to beat his teammate’s score count.

The Dragons will have a chance to put another win in their record on Sep. 10 against Oxnard High School.