Recap: Baseball shut out on Senior Night by St. Bonaventure, 6-0 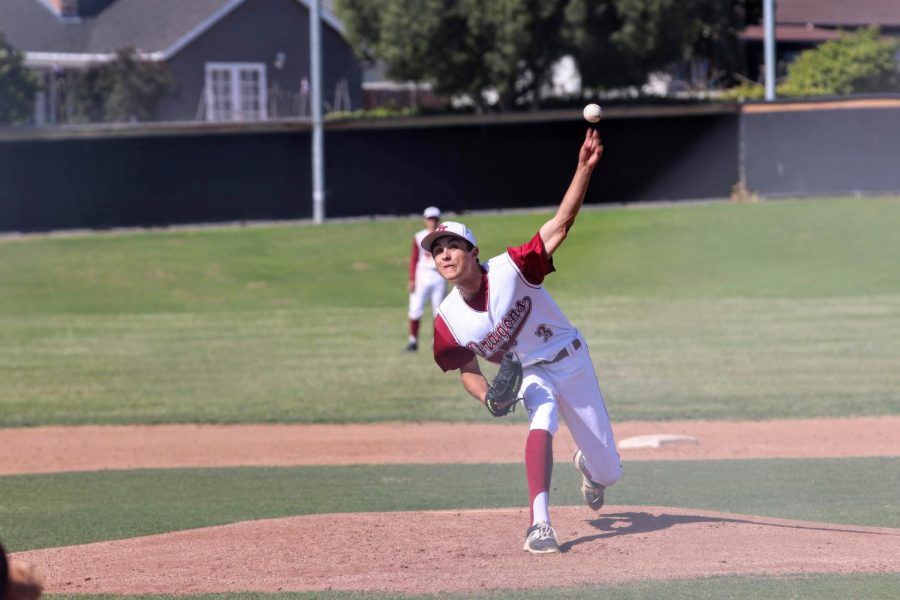 The ball launches from Charlie Montano's '19 hand on the pitching mound.

For Foothill’s varsity baseball team, the afternoon of April 22 marked the final home game for the graduating class of 2019. Taking the field in front of their home crowd at Ventura College for the final time were the three Foothill seniors: Gage Corsi ‘19, Dillon Gallagher ‘19 and Charlie Montano ‘19.

Their opponents, the Seraphs of St. Bonaventure High School, shut the Dragons’ offense down as they rolled to a 6-0 victory over Foothill.

Over their two meetings this season, the Seraphs have a run differential of +16 when matched up the Dragons. The previous contest, played on March 29, yielded a 12-2 St. Bonaventure shellacking of Foothill.

For Montano, a four-year member of the Dragons’ baseball program, Senior Night was “a little weird knowing that it was my last time throwing for Foothill,” but he felt “really happy with the way the season ended up.”

With the season winding down and no playoff berth in sight, the Dragons stand at 5-11-1 overall (0-7-1 in league play). According to Montano, the subpar record can be a result of facing difficult competition for a smaller program like Foothill.

“We were put in a league with Division 2 programs, so it’s hard to get the wins needed to [clinch] a spot,” he explained.

The Dragons will compete with the Seraphs for the third and final time on April 25, where it will be St. Bonaventure’s Senior Night. Foothill will look to spoil the Seraphs’ perfect 8-0 league record while attempting to notch their first league victory of the season.