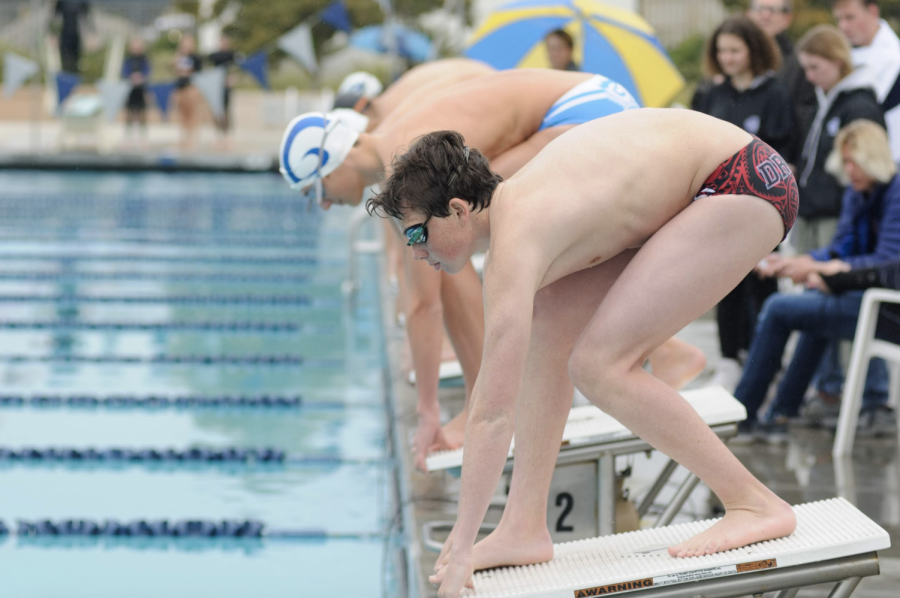 Brandon Rodgers ‘22 is ready and in position for his race.

The Foothill Technology High School swim team made a splash at league finals for both boys’ and girls’ varsity at the Cate School pool on April 16 and 17. The girls came in first place with a score of 394 out of seven teams, followed by La Reina, Villanova Preparatory, Cate, St. Bonaventure, Grace Brethren and Laguna Blanca making up the second place through seventh place. Foothill barely edged out runner-up La Reina by 28 points.

The boys also placed first with a score of 558.50 with Cate, Grace Brethren, Villanova and St. Bonaventure trailing behind. The boys’ closest competition, Cate, was nowhere near threatening their eventual victory, falling behind the Dragons by 221 points.

Giovanna Postma ‘21 believes that the team achieved victory because of their ability “to motivate each other.” Additionally, they were able to “all unite as one” to “score points for the team.”

Jack Ryan ‘21 was also proud of his team’s performance in league finals. He felt that the team “performed very well” and that the team “had a lot of depth [and] a very good variety” of swimmers.

Another important aspect of this team, according to Ryan, is their bond. He stated that the team is “like a family” and “everyone’s really for each other rather than for ourselves.” Ryan added that swim is “an individual sport, but it’s a team effort.”

Even though this was the last of their league meets, the Dragons’ swim program will face even tougher competition in the first round of CIF on May 1 at the Riverside Aquatics Complex.