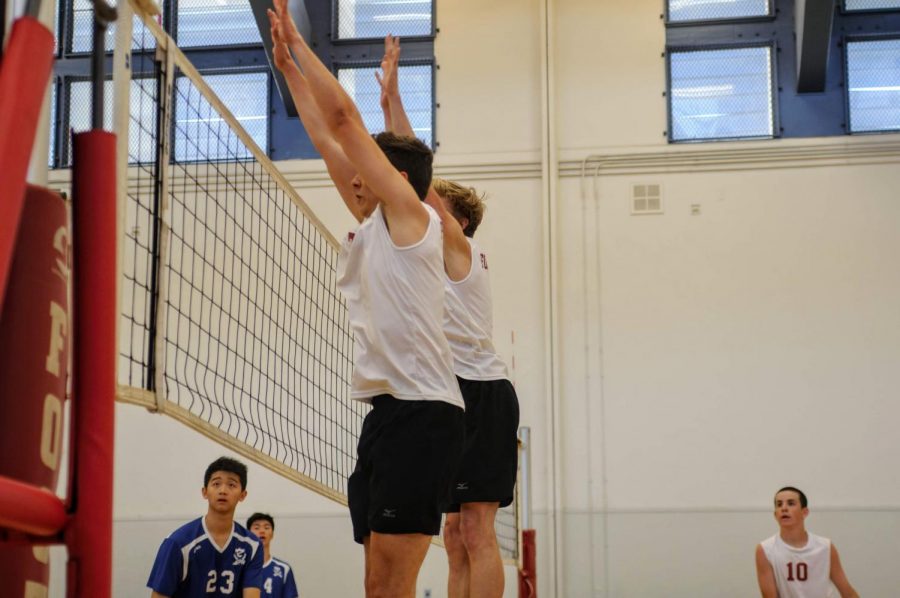 Stefan Fahr '19 and Logan Grenier '19 block the on coming ball.

Queen’s ‘Under Pressure’ played through the gym as the Dragons took the court, and for four seniors it was possibly the last time they’ll ever compete in their home gym at Cabrillo Middle School. Parent Jim Armstrong led the festivities to honor four seniors: Stefan Fahr ‘19, Bryce Gordon ‘19, Logan Grenier ‘19 and Manny Hernandez ‘19.  The boys reminisced their best memories in the program while also looking into the future by celebrating their college and major choices. They gifted bouquets of flowers to their parents and huddled together to exchange pregame strategy and excitement.

As the whistle blew to commence the game, Cooper Armstrong ’20 took the back line to serve. Hernandez started the game strong with a hefty block, giving the Dragons the lead right off the bat. Armstrong followed it up with an ace, and from there the boys barely edged the Rams, trading off the lead until they finished the game at 25-20.

The Foothill stands buzz with excitement, as the boys encouraged enthusiasm on the court.

While the Dragons were able to keep it close, hitting errors added up and the inability to side out resulted in a 25-22 loss, leveling the score at one set to one set. Both sides of the net were eager to push ahead, but in the third game, neither team was up by more than three points until the very end. Despite numerous kills by Josiah Jorden ‘20 and Grenier, the Rams were able to pull away once again in a 25-23 win, leaving the Dragons down one set to two.

The Dragons came back fired up and ready to defend their home court. Despite starting the game unable to return back-to-back serves, they never trailed for the rest of the game and dominated in a 25-14 victory. Fahr and Matt Godfrey ’20 led the team with 11 and 18 kills, terminating plays and leaving the Rams with little hope for a comeback.

Gordon’s consistent digs and Armstrong’s precise dumps made the difference in the 17-15 final game, yielding the victory for the Dragons.

The team and their head coach, Cierra Merz, declined to comment on the match.

The Dragons will advance to the next phase of the season in CIF (California Interscholastic Federation) playoffs.