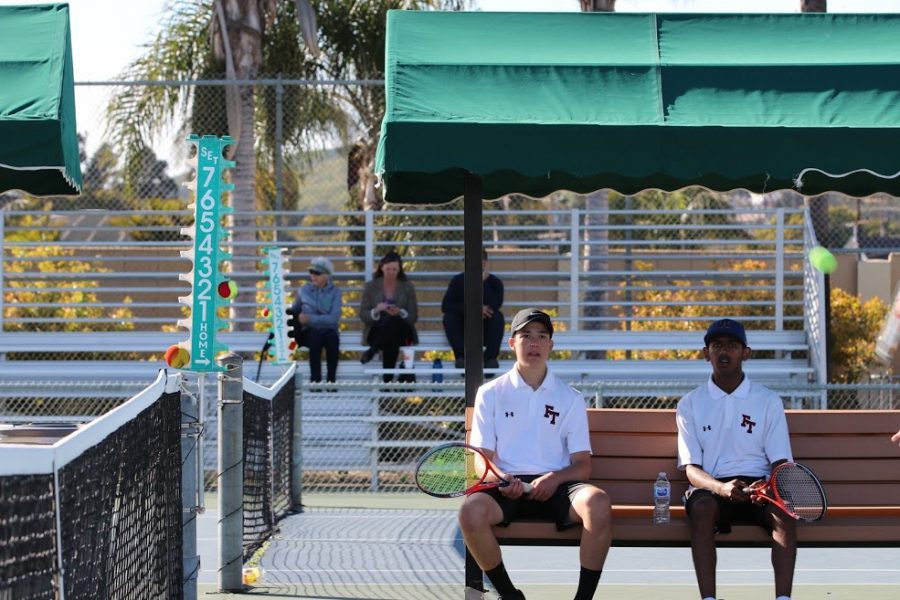 Tomas Carrillo '20 and Shiv Bhakta '20 wait for their match.

Though the sun was blaring and the wind was blowing, the boys’ tennis team remained unfazed in their match against Bishop Diego on April 11. With the Cardinals down one doubles team, the Dragons already had a leg up, but it was talent and skill that led to a commanding 17-1 performance.

Eesh Manwani ‘21, Ashkay Shanbag ‘21 and Ethan Wang ‘20 made up a strong singles lineup for the Dragons, winning each game with ease.

On the doubles side, three of the sets were already secured by default. However, the teams took nothing for granted and worked to win all but one of the remaining six sets.

Shiv Bhakta ‘20 and Nikhil Maserang ‘21 made up the number one doubles team for Foothill. They finished with scores of 6-0, 6-4 and the default 6-0 set win.

Maserang felt that the team played consistently well to secure the win, but even in well-played matches, there is always something to learn.

He thinks the doubles teams “need to be more consistent because a lot of the time we make errors that are unforced.”

“We need to practice,” Maserang said.

Devin Franke ’21 felt that the “team played great,” but was hindered by the windy weather.

With the knockout performance, the Dragons took 105 games, as opposed to the Cardinals’ 20.

The contest marked the last league match for the Dragons before they head into league finals on April 17.

Looking back on the season, both Franke and Maserang have enjoyed the laid-back atmosphere of the team.

The Dragons were unable to qualify for the California Interscholastic Federation (CIF) Playoffs; the team is excited to come back next year and continue to grow together.

“The tennis team wouldn’t be the same without the players we have on it now,” Franke remarked.