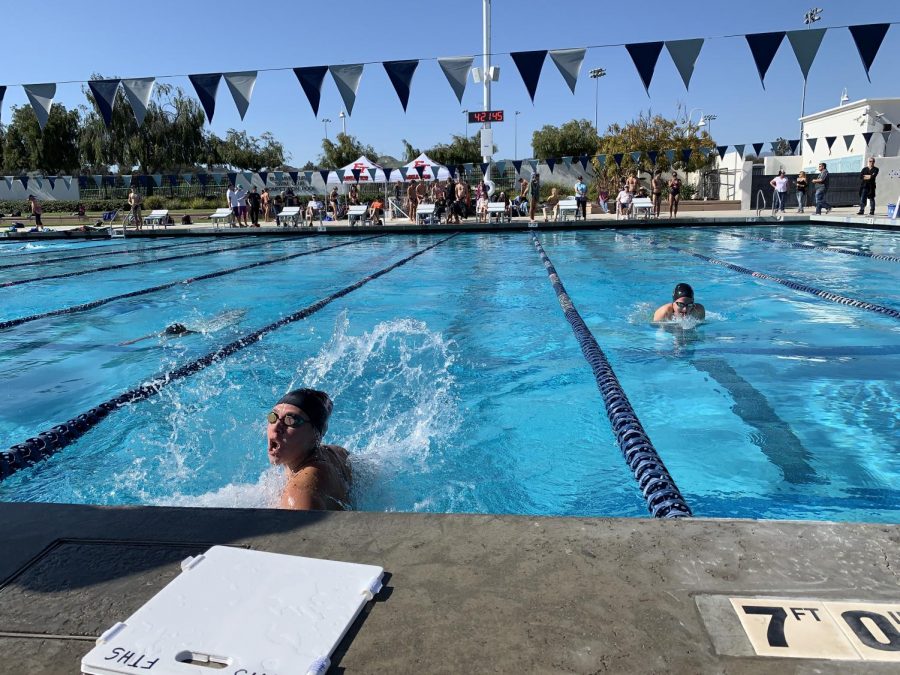 Annika Arroyo '20 comes up for air as she turns down the lane.

The Foothill Technology High School Dragons competed against the St. Bonaventure Seraphs on April 10 at the Ventura Aquatic Center pool. Foothill went into the meet with confidence and light-hearted energy that matched the warm and sunny weather outside.

The Dragons were victorious against the Seraphs on both fronts, with the girls and boys winning by scores of 121-39 and 126-26, respectively. Both teams were extremely successful, as they outswam St. Bonaventure in every event.

Just like their meet against Grace Brethren, head coach David Wallace put the swimmers in events that differed from their usual. Alyssa Mendoza ‘19 felt that even though Wallace “mixed up all of our events[,] our whole team did really well.”

Like Mendoza, Brandon Rogers ‘22 thought that the team “did really well.”

Rogers believed that the team’s technical strengths included flip turns and relays, but their more concrete demonstration of strength was that three additional swimmers were able to achieve CIF times.

Wallace stated that the team “did good” in their meet and that a group of junior varsity swimmers competed with the varsity.

Although Wallace was pleased with his team’s performance, he continues to be very focused on their upcoming CIF and league finals meets. He is looking forward to “everybody tapering down and swimming their fastest.”

Rogers is excited for their upcoming meets and “being together as a team and trying to beat our times.”

The swim team will look to get more CIF times in their preliminary meet at Cate High School on April 16.