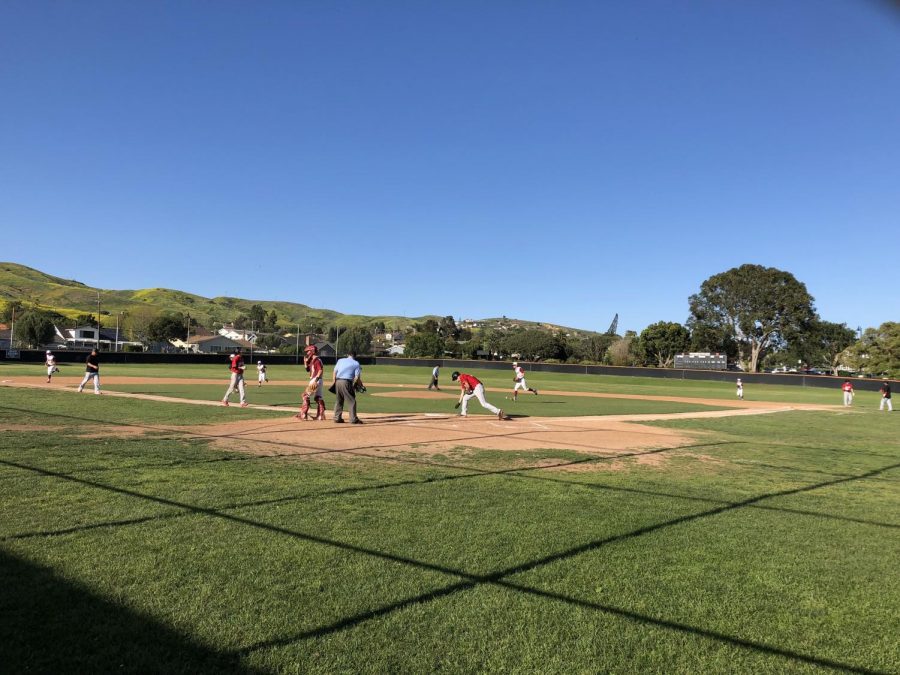 The baseball team lost to Bishop Diego Cardinals in a complete game shutout.

On April 10, the boys’ varsity baseball team sought their first league win of the 2019 campaign, entering the contest with a record of 0-4-1 versus Tri-Valley League competition. Foothill was tasked with facing the Cardinals of Bishop Diego High School, who also held a 0-4-1 league record. Bishop Diego’s starting pitcher, Hamilton Finefrock ‘20, went the distance in this game, pitching a complete game shutout. Allowing only two hits and a walk over seven scoreless innings, Finefrock was masterful, striking out 14 Dragons en route to a 7-0 shutout win for the Cardinals at the Ventura College baseball field.

The Dragons’ starter, Tyler Hong ‘20, opened the game with back-to-back strikeouts. It looked like he would face the minimum number of batters until Joey Bishop ‘21 made a nice play at third base but overthrew the first baseman. An unearned run due to the error scored as the next batter for the Cardinals doubled, giving Bishop Diego an early 1-0 lead.

Held in check by Finefrock, the Dragons’ offense never awakened from its slumber in this one, so the first inning score proved to be enough. In the third inning, though, Bishop Diego added a run on a Dragons error and a sacrifice fly RBI, extending the lead to three.

Hong and Spencer Major ‘21 were the only two players able to notch a hit off of Finefrock, but that was about as far as they progressed. Hong was picked off at the time of his single and following Major’s base hit to lead off the third inning, Finefrock proceeded to strike out the side.

A bunt single and a ball that sailed into center field on a stolen base attempt helped the Cardinals stretch their lead to five after the fourth inning had concluded. Bishop Diego tallied two more scores in the fifth inning on a sacrifice fly and an RBI single, and the Cardinals protected that 7-0 lead for the rest of the game.

Head coach Mike Ramos said that Foothill was “a little flat at the plate,” but also noted that the “defense was good and the two guys that were on the hill—” Hong and Cole Thrasher ‘20—“performed pretty well.”

The Dragons’ next challenge will come against the same team; they will travel to Bishop Diego High School to take on the Cardinals on April 12.

In order to keep pace with Bishop Diego, Ramos said that the team “needs to bring up the tempo and bring a little bit better performance at the plate with their sticks.”