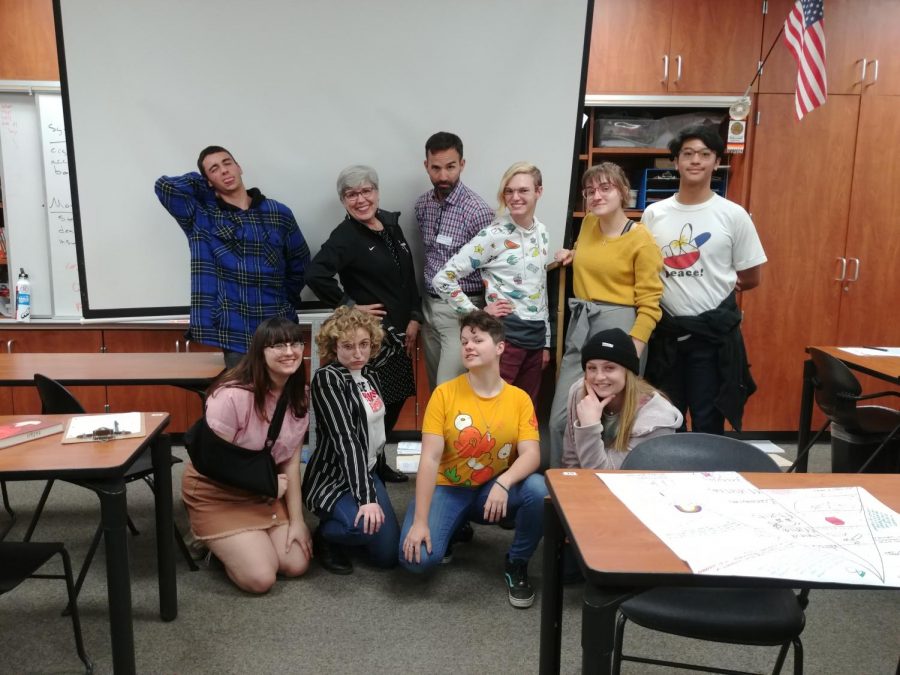 In the shadow of Foothill’s first-ever Pride Week, Ventura Unified School District Career and Technical Education Director Greg Bayless attended a Queer-Straight Alliance (QSA) meeting during lunch on Thursday, March 14. President Hannah Yale ‘20 requested him to attend, with the purpose of elucidating the concerns of QSA members to him.

The meeting began on a friendly note with Bayless attempting to memorize the names of those present at the meeting and those eating lunch in teacher Brooke Schmitt’s classroom, which is where the meeting took place.

Moderating the conversation, Yale began the meeting by focusing on the topic of sexuality. She asked those attending the meeting if they were not straight; in response, the majority of attendees raised their hands. Before proceeding with conversation, teacher Melanie “Captain” Lindsey asked the students if they felt safe raising their hands in the room and if they would feel safe raising their hands anywhere on campus, and a majority of students responded in affirmation to the questions.

Bayless asked Abbey Bufford ‘19 to begin the conversation on how safe they feel both physically and emotionally as a gay student on campus. Bufford proceeded to explain that around familiar faces, they feel safe. However, when it comes to a class setting, they said people would sometimes “find it disruptive” or “would feel weird, maybe surprised” at the thought of two people of the same gender together as a couple.

In addition, Bufford felt like teachers aren’t well-equipped to address a gay student, but that it also shouldn’t be up to a high school student to educate a teacher on how to talk with gay people.

“I don’t want to take it on me to teach them in the middle of class about when a gay student is talking, this is what you should say,” Bufford said.

On the other hand, Yale said she has instructed a teacher in this way.

“What Abbey said about having to teach your teacher how to handle or even understand how to talk to gay people,” she said. “I had to do that the other day.”

She gave a recent example about how she explained to a teacher how to talk with gay people during class and continued to after class. Yale expressed how she felt very uncomfortable by the questions the teacher was asking, and Bayless reassured the group that he would attempt to talk to teachers about how to mend these issues.

The conversation then shifted to a discussion about how QSA felt that Foothill was safe and accepting to the LGBTQ+ community. Jake Ayers ‘19 shared that he usually felt that it was safer to be in a group, which Bayless explained as being due to “governing rules.”

“If someone gets out of line, someone is gonna place some order,” Bayless said.

Several students, like Lorenzo Rosario ‘19, felt that Foothill was a “safe” school in comparison to others in the district. In his sophomore year, Rosario attended summer school at Ventura High School (VHS). After class, he was cornered and assaulted because the assaulter had found out his sexuality. For this reason, he added on that he ”feels much safer at Foothill.”

Subsequently, the comfort of transgender students on campus was discussed. The group felt the newness of being transgender has caused a “huge stigma”, because there are people who believe it to be a mental health issue.

This stigma has followed Drew Jacobson ‘19. He is a transgender male who is constantly mislabeled as “she,” even when he wears a pin with the pronouns “he/him.” This has caused Jacobson to question if those who mislabel him are doing it intentionally, or just don’t notice the pin.

In addition, he feels that it’s harder to hide one’s own gender. He recounts a “very awkward” and “nerve-racking” experience about how in class, his gender was outed because the teacher had referred to him as “she.”

A student added that the stigma is further amplified with the derogatory term “trap.” Bayless and the teachers in the classroom were confused because they had not heard of this term before, while the students showed experience with it.

“Trap is basically supposed to imply that somebody is dressing up as a gender in order to trick somebody into having sex with you,” Ayers clarified. He believes that the term is not used in a malicious way, but that people just don’t understand what they are saying.

Furthermore, the lack of gender neutral bathrooms for students has made people like Jacobson and Bufford have to compromise. Jacobson cannot go to the restroom without friends keeping watch for him.

“I just get really nervous,” he said.

On the other hand, Bufford has had to use the women’s restroom, because there have yet to be clear answers about which bathrooms are available to them.

Assistant Principal Lisa Harvill reassured the students that the office has two gender neutral restrooms available at anytime for student use. In addition, the school is attempting to figure out how to further solve the bathroom issue.

The meeting ended on a positive note as Harvill reached out to Jacobson and reassured him that his teachers would be emailed and asked to use male pronouns when referring to him. She asks students who would like a similar action to be taken for them to let her know. Though there was more to be addressed, the meeting was cut off with the ring of the bell.

Overall, Bayless learned that the perception of Foothill’s environment by LGBTQ+ students “is generally positive,” and how important it is to “getting to know people as individuals.”