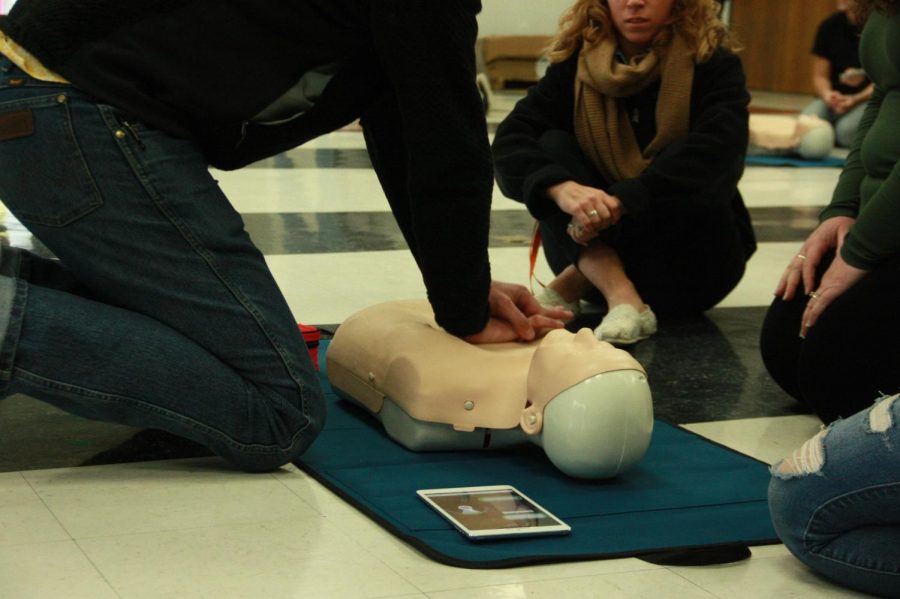 Following the weekly staff meeting, Foothill faculty was shuffled into Spirito Hall, where Cardiopulmonary Resuscitation (CPR) training mannequinns laid lifeless, set to give a critical lesson in ensuring students safety on campus. Mon., March 11 was the first time that Foothill staff had a CPR training, which was led by Bioscience Academy Coordinator Mika Anderson and several of her students.

Anderson and her student team meticulously detailed the procedure of CPR and how to use an Automated External Defibrillator (AED) with the objective of providing staff with appropriate skills to be able to act in emergency situations.

In response to a recent push by Foothill’s Health Occupation Students of America (HOSA) chapter, the demand for AEDs on campuses across Ventura Unified School District (Ventura Unified) is anticipated to make headway in becoming a reality. A possible introduction of the devices on campus also means an introduction of training, in which Foothill is receiving a head start.

“The reality is what you’re doing is really incredibly hard, because they’re already dead,” Anderson began. “They don’t have a pulse; they are not breathing. They are technically dead. What you are trying to do is you’re trying to bring them back to life.”

With that, student volunteers systematically demonstrated the extent of what a teacher can and should do: call 911, then begin compressions until further help arrives.

Following the introduction, staff and students were launched to practice in groups of four or five. “You go for two minutes or until you’re tired, because CPR is a lot more tiring than you think,” Annie Stevens ‘20 warned as the groups began.

Equipped with iPads that provide feedback on proficiency in the depth, tempo and overall performance of the compressions, each group ran through the two-minute procedure a few times before debriefing. Results varied, but eventually all groups finished with some degree of success in “saving” the mannequin.

After the instruction of manual CPR, red cases carrying practice AEDs were pulled out for the next step. This round, mechanical beeps and the automated request to “apply pads to patient” echoed throughout the room, accompanying the clicks of the dummies.

According to Anderson, having the knowledge to use an AED correctly is important “because they’re finding due to drama or TV, people are fooled into thinking that because they do compressions and CPR—that this person is going to go to the hospital—they’ll come out alive and everything is wonderful.”

As the teachers learned the steps and safety measures of the devices, Anderson explained that “without an AED, [people] have about a survivability of about 25 percent;” however, “with an AED, it goes up to about 90 percent.”

To further exemplify the importance of having these devices available, HOSA Co-President Bailey Dent ‘19 pointed out that “usually most places, restaurants, gyms, you know, malls, everything, they have an AED,” but “there are no AEDs on campus.”

Staff members Jason Edgemond, Heather Ferris, Brooke Schmitt and Emily Stevens were grouped with HOSA Co-President Sowon Lee ‘19, and they held up their mannequin with a proud 99 percent survivability on the third round of practice.

After another few tries, some last questions were asked and the training winded to an end.

In light of HOSA’s announcement of an upcoming petition to bring AED devices to schools, teachers like Kristen Pelfrey share an optimistic outlook on the training, believing that “it’s critical,” and praising the Bioscience students for being “terrific and very professional.”

When it comes to student safety, Anderson believes that having and knowing how to operate an AED “is a good place to start.”