The Foothill Dragon Press • May 27, 2019 • https://foothilldragonpress.org/267727/opinion/compromise-is-overrated/ 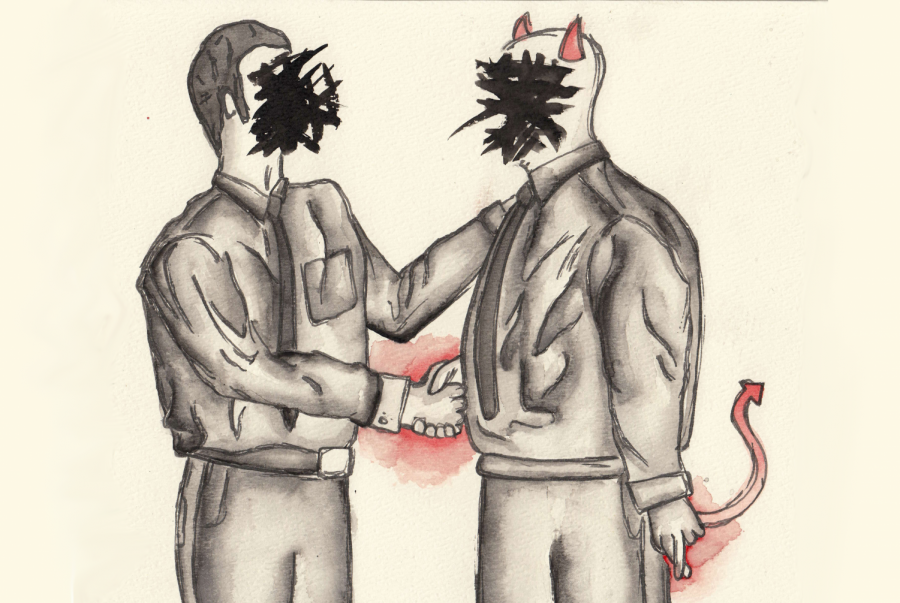 You know what they say: Compromise, compromise, compromise—it’s what we do when we abandon our values. Whether you want to call it compromise, bipartisanship, or simply extending a gentle hand across the proverbial aisle, the practice of making concessions to your political opponents is antithetical to democracy and the battle of ideas. Bipartisanship carries a strong positive connotation in the religion of D.C.-insider politics. War criminals and racists are frequently christened by the elite punditry for their “legacy of compromise,” with the most monstrous characters earning cutesy nicknames from historians and colleagues.

When you think about it for more than five seconds, the concept of compromise as a good thing for democracy is a farce. What’s the point of running on a platform or debating other parties when meeting in the middle is the desired outcome that the mainstream media always gushes over? As Luke Savage writes, “If you’re not fighting with anyone, you’re not fighting for anything.” Politics is meant to have winners and losers, and we should be more than comfortable with that. Think of it as a good thing that you ruined your family’s Thanksgiving by taking your racist grandpa to task on politics: without that kind of bravery, regressive ideas will stick around long after their time is due.

Let’s examine some key historical instances of compromise. The Missouri Compromise, Compromise of 1850, Kansas-Nebraska Act, and the Crittenden Compromise were all nasty stains that, luckily for their makers, blend in quite well with the rest of the horror story that is American history (at least as taught outside of America). Short term-wise, these landmark compromises preserved the practice of chattel slavery. In the long term, they failed to achieve their purpose of keeping the Union together and averting violence (see: Bleeding Kansas and the American Civil War). Now, you can qualify this by saying that most of these issues are very complex, and you would be right. However, just because something is complex doesn’t mean the answer must always lie in the middle. This misconception is why so many compromises needlessly delay social justice; sometimes one side is right and the other side is wrong, and history proves this.

I’d be remiss not to include the Compromise of 1877, so I’ll defer any remaining analysis to the hosts of the famed podcast Chapo Trap House. In their book, The Chapo Guide to Revolution: A Manifesto Against Facts, Reason, and Logic, they write:

“The Compromise of 1877 was another landmark of civil moderation: on the one hand, it prevented Democrat Samuel J. Tilden from winning the presidency, and on the other hand, the antebellum slave-owning aristocracy regained total political control of the south, engaged in violent repression of freedmen, reinstalled the institution of slavery in all but name, and perpetuated a racial crisis that would last for the next 141 years and counting—so, win-win.”

Now for some more recent history in political compromise. I will again cite Savage’s article, but this time at a much greater length:

—2017 Senate resolution affirming Israel’s right to full control of Jerusalem as its capital in violation of overwhelming United Nations consensus (Senate: 90-0). Unqualified support for Israeli militarism and occupation may be the single most bipartisan issue of all; it was Chuck Schumer who advised Donald Trump to move the U.S embassy to Jerusalem. And let’s not forget the more than a dozen Democrats who signed on to a measure to criminalize the BDS movement.

—2017 House approval of a $700 billion defense spending bill, the highest ever, which Forbes said made “Trump’s [massive proposed military budget] look positively reasonable in comparison” (60% of House Democrats in favor)

From reading that list, it’s clear the writer is left-wing. I might even disagree with him on one or two of those things being bad, but that’s no reason to write his words off. It’s impossible to deny that the center is unified in its service of the military and prison industrial complexes.

There have, of course, also been moments in history when people refused to compromise. What a bunch of naive chumps, am I right? I mean, they only managed to pass the Civil Rights Act and end apartheid in South Africa. In the same spirit, another group of “radicals” recently achieved marriage equality and will soon, as I predict, legalize marijuana at the federal level.

But you protest: “Isn’t compromise a core American value? Was our nation not birthed by the valiant efforts of Roger Sherman to reach a compromise at the constitutional convention?”

Each and every delegate at the constitutional convention was hell-bent on restricting “excessive” democracy, protecting their hoarded wealth, and keeping human beings in chains. They did not care about your liberty or individual freedom, and frankly, many of their ideas are outdated and unpalatable in our age of global terrorism, multinational corporations, and big banks.

In reality, the United States came to be because a group of uncompromising ruffians, after a few tepid and predictably useless motions, decided that enough was enough: it was time to take up arms and fight for independence from a government that refused to offer them a say in decisions that affected them (“no taxation without representation!”).

As a matter of fact, most of the reforms that smug liberal politicians in the Democratic Party now brag about would not have come to fruition had it not been for the willingness of labor organizers, socialists, and other stubborn degenerates to fight and die for those causes: the eight-hour workday, a woman’s right to vote and divorce her husband, consumer protections, slavery abolition, child labor laws—you name it. They championed them when no one else had the courage to and continued to do so until those ideas broke into the mainstream. In 2019 we tend to take these things for granted, as if they eventually just appeared as a matter of being. But center-left and center-right politicians didn’t just decide to do these things; they had to be pressured. The cliche I’m dancing around here is that change comes from the bottom up, and compromise, more times than not, is a way to maintain the status quo under the guise of “returning to civility,” “leading with our values,” “progress through incrementalism,” or some other empty bromide.

—Do not take my assertions as absolutes. Compromise is merely overrated, not wrong in principle. Indeed, there are examples of compromise being both politically expedient and morally sound. Just recently, Senators Mike Lee and Bernie Sanders proposed a bill to end U.S. support for the Saudi-led genocide in Yemen. Lee and Sanders are probably the most polar opposites you could find on just about every other issue, but here is something where they see eye-to-eye and have a chance to do some serious good in the world.

Likewise, refusal to compromise has brought untold amounts of misery. Dictatorship isn’t exactly built on compromise, and neither were the Nazis and Bolsheviks. The Confederacy was radical. My point isn’t that compromise is always this evil enterprise undertaken by spineless politicians who want to bomb brown people abroad and lock them up at home (although it often is). My point is that compromise, although making for a feel-good media spectacle, isn’t always a good thing, and it ought to be taught as such.

I say this because the American school system seems to have a fetish for compromise. In world history, students learn of the catastrophic consequences that arise when zealous revolutionaries fail to engage in reasonable dialogue with the despots who are starving them. If your thesis hits on this point, then I guarantee you will score an ‘A’ so long as your essay is decently written. Most U.S. history students never get to analyze the aforementioned horrors of compromise that Savage enumerates. Instead, only the crimes of fringe-radicals, like the militant anarchists, or the stubbornness of the infirm, like Woodrow Wilson with his League of Nations, are covered. Lincoln needed those border states, therefore compromise gets us through the day. It may do that, but is it what gets us to the best possible place? Not at all. Sadly, I see no immediate way to combat this centrist propaganda.

I will close with the infamous MLK quote:

“I have almost reached the regrettable conclusion that the Negro’s great stumbling block in his stride toward freedom is not the Ku Klux Klanner, but the white moderate, who is more devoted to “order” than justice.”

But for every man who seeks justice, there is his foil. Sadly, there will always be a politician like Joe Biden, the anti-busing Democrat who yearns for the era of American history when “the political system worked,” by which he means the time when he could be best buds with segregationists without facing censure, probably because he is one.

Don’t be a white moderate. Don’t be a Joe Biden. Be a John Brown, a William Lloyd Garrison, a W.E.B. Dubois, a Susan B. Anthony, an Emma Goldman, a Eugene Debs, a Malcolm X, a Muhammad Ali, an Angela Davis, etc. Hell, be a tea-partier or a progressive, and perhaps someday the centrists will see it is the fringes that drive this country forward.