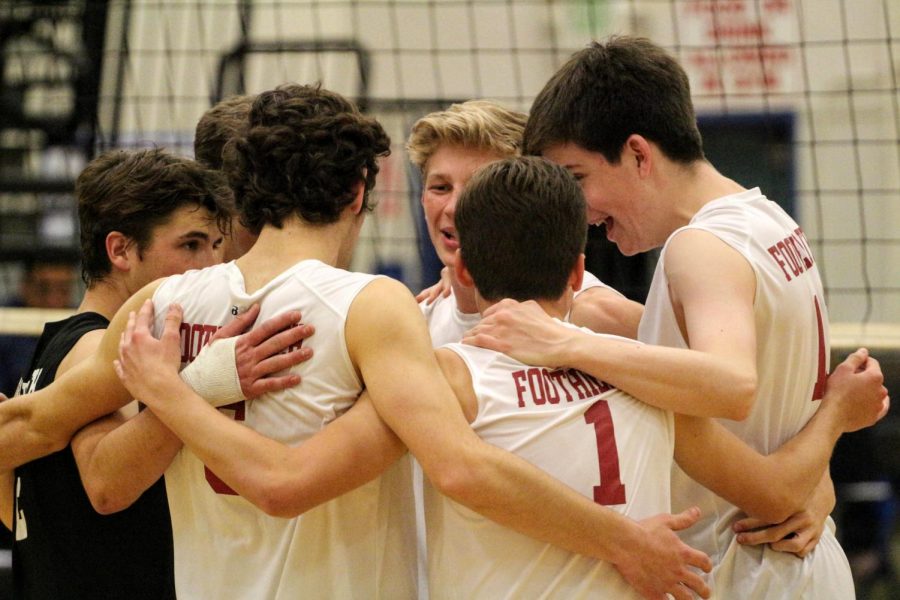 The boys celebrate on the court after scoring a point against Santa Clara.

In their league home opener on March 5, the Foothill Tech boys’ volleyball team hammered the Santa Clara Saints 3-0 in decisive fashion. Though the crowd in the Cabrillo Middle School gymnasium was small and rather quiet throughout the match, the Dragons stayed enthused and passionate on the court, celebrating each point as if it were the deciding factor in the match. With set scores of 25-5, 25-11 and 25-14, the boys rolled to an easy victory behind the stellar hitting of Stefan Fahr ‘19 and Matthew Godfrey ‘20.

Cooper Armstrong ‘20 set up Godfrey for the first two kills of the game, followed by a tip by Manny Hernandez ‘19. The Saints kept it close at first, cutting the score to 4-2, but from there on out, Foothill dominated the set. Fahr stepped up and served for 18 straight points, including seven aces from Fahr and kills from Godfrey and Logan Grenier ‘19. The Dragons ended the set on a 21-3 run, winning 25-5.

Santa Clara struck first in the second set with a big hit from the outside, but Foothill quickly grabbed the lead behind an ace from libero Bryce Gordon ‘19  and a kill from Fahr. Godfrey continued drilling it off of sets from Armstrong and the Dragons cruised to a 25-11 set victory.

The third set was a bit closer, mainly due to mistakes made by the Dragons, but they maintained control of the game with their strong passing in the back row and accurate serving. Gordon finished the match on an ace, winning the third and final set 25-14.

Godfrey felt that the team “didn’t play to our full potential,” but that even in a “rebuilding year,” they still have a strong group of boys who are working to get better every day.

Foothill will take on the Providence Patriots at home on March 7 for another league matchup.

Editor’s Note: Stefan Fahr is a staff member of this publication; he was not involved in the reporting or editing of this article.