Foothill principal's actions regarding Pride Week found to not be discriminatory; recommendations given regarding future school sponsorship of student activities. 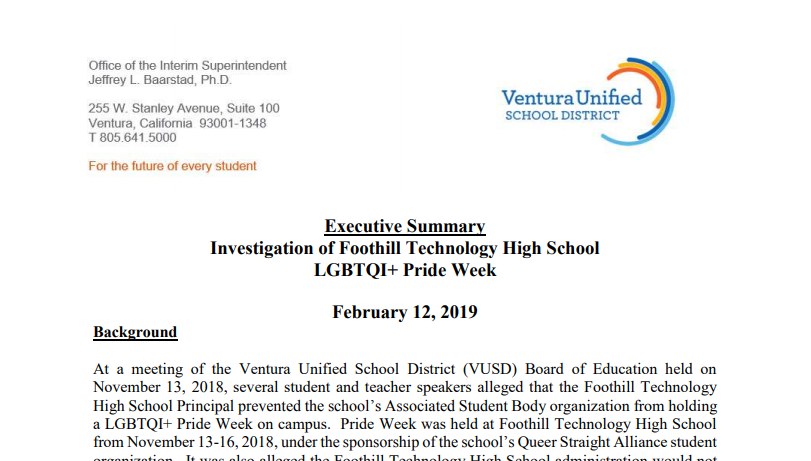 In the aftermath of concerns over Foothill’s handling of the first-ever Pride Week, a district-led investigation of Foothill’s administration was launched over the course of several months. On Wednesday, Feb. 13, this investigation was officially concluded through the release of an executive summary by the Office of the Interim Superintendent Jeff Baarstad.

The report begins by providing background regarding the situation, specifically identifying the issue that led to the investigation in the first place: during the Nov. Ventura Unified School District (Ventura Unified) Board of Education meeting, “several student and teacher speakers” claimed that Principal Joe Bova “prevented the school’s Associated Student Body organization from holding a LGBTQI+ Pride Week.”

“Associated Student Body (ASB) […] decided to host a LGBTQI+ Pride Week to provide resources to the student body,” the summary reads. “The FTHS ASB Advisor informed the FTHS Assistant Principal of the event. A t-shirt was designed and ordered to commemorate the event.”

However, “parent and community concerns in the form of phone calls and emails, some anonymous, were received by site and school district administration regarding Pride Week,” the summary details. “Questions included, is this a school pride week, or a gay pride week, and is it sponsored by the school?”

In response to these mounting questions, the ASB Coordinator Melanie “Captain” Lindsey and Assistant Principal Tina Perez “met to clarify the intention of Pride Week and ASB sponsorship of the event, and provided information to school district administration in response to the concerns” that were issued.

When Lindsey then spoke to Bova, “[h]e stated, ‘We cannot sponsor any event that lends itself to a specific viewpoint.’”

According to the report, the “ASB Advisor interpreted the Principal’s statement to mean that the event could not be held. She was disappointed, and concluded the conversation.”

When speaking to Perez, however, Bova indicated that “by stating ‘we can’t sponsor’ he meant the school, school administration, and District cannot sponsor such events, but the event could be student initiated, student run, and student led.”

After Perez and Lindsey spoke, Lindsey resolved on created a Queer-Straight Alliance to sponsor Pride Week, and received “favorable student responses” to this decision, even though “the principal later clarified […] that ASB sponsorship of the event would also have been appropriate.”

The executive summary then proceeded to list the conclusions made from the investigation.

According to the report, “[t]he investigation found sufficient credible evidence” that Pride Week was not canceled, and that “the shifting of event sponsorship from ASB to QSA was a result of a misunderstanding, and not as a result of a directive from the Principal.” Additionally, “the investigation found no evidence to determine the Principal’s actions were discriminatory.”

In regard to “denying the use of the school mascot/logo to the QSA student organization on the Pride Week t-shirt,” the investigation concluded that Foothill administration violated the guidelines of Ventura Unified’s Policy/Administrative Regulation 6145.5—the one regarding the parameters of student organizations and the Equal Access Act.

“However,” the report claimed, “it is noted that use of the school mascot/logo had not been granted to student clubs and organizations other than ASB in the past.”

“Based upon the findings of this investigation,” the district advised the creation of a “committee” of “District and school site administrators, and teachers and other school site staff responsible for supervising student organizations.”

They envision for this committee to “review all relevant VUSD Board Policies and Administrative Regulation,” and from there, “develop uniform, consistent and practical guidelines and protocols for the supervision and approval of student organizations and activities.”

Finally, they recommend for Ventura Unified to “hold initial, and periodic refresher training on the guidelines and protocols for all appropriate District and school site staff.”