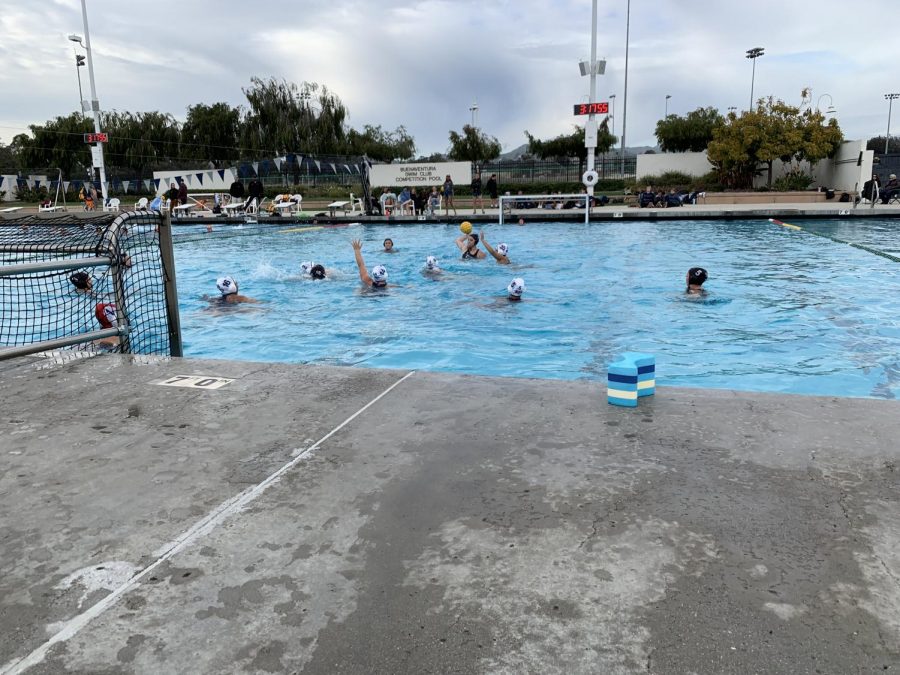 The Foothill Technology High School Dragons faced defeat in their last league game of the season after an additional four rounds of overtime. The Villanova Preparatory School Wildcats fought hard to conquer the Dragons and ultimately succeeded after a shot into the lower left corner during the second round of sudden death overtime rounded out the fourth extra period.

Before the game commenced, Foothill acknowledged the seniors of both teams. The ceremony, which was mainly focused around the Dragons’ two seniors Sydney Roman ‘19 and Ashley Rogers ‘19, was short and sweet.

When the first whistle was blown, Roman went against Villanova for the sprint and won possession. This, along with a shot by Roman, gave the Dragons the high energy they needed to keep Villanova on their toes. However, the Wildcats also started strong and were able to score first.

After this goal, Roman was able to make another attempt but it was not on the frame. Despite this, Annika Arroyo ‘20 tied the game with a goal after a skillful turn around two opponents. The Dragons worked to take the lead by moving the ball across the pool until it was intercepted by Villanova. The Wildcats were close to regaining their lead but Nicole Johnson ‘20 took the ball to the left side of the pool and gained full possession after they shot.

Later in the quarter, Morgan McKillican ‘20 put Foothill in the lead after a strong shot following a foul in the middle of the pool. Villanova responded to this pressure by finishing a shot that popped over Johnson’s head.

The second quarter began but this time, Villanova won the sprint. They continued their momentum with a goal that sailed into the upper right corner after a foul. They continued to control the game despite another shot by Roman. The Wildcats finished another attempt but Heidi Fedde ‘21 countered with a score of her own. The game continued to go back-and-forth; the Wildcats and Dragons both scored again before the quarter ended, resulting in a 5-4 Villanova lead.

During the third quarter of the game, the goalies of both teams were pressured with shot after shot. Arroyo scored another goal but Villanova followed and did the same. The Dragons had two more shots hit the post and another saved by the Wildcats’ goalie.

Villanova continued to build on their lead with yet another goal but Roman was able to intercept the ball shortly after. The following passes between Fedde and Roman nearly resulted in a goal from Rogers, but this effort was unsuccessful and Villanova scored again, but the game was far from over.

Arroyo was able to score two more times and the quarter ended with a score of 8-7, with the Dragons trailing by one.

Villanova started the fourth quarter with a bang by scoring their ninth goal of the match. Foothill retaliated with a goal from McKillican but they still trailed by one. Just when it looked especially bleak for Foothill, Fedde scored the goal they needed to progress to overtime.

The first overtime period began and Roman won the sprint, giving Foothill possession. McKillican was very close to putting the Dragons ahead with a strong shot that hit the post. Both teams had several attempts to put the game away but neither was able to gain an advantage over the other.

However, the second round of overtime was a different story. Villanova converted on an open shot from the middle of the pool and Rogers later scored after receiving a pass from McKillican. This round of play also ended in a tie with a score of 10-10.

The third round of overtime commenced but there was one new rule implemented: sudden death. Despite the hope for a Dragons’ Senior Night victory, neither team was able to reap the benefits of the new rule and they would be forced to compete in the fourth round of overtime, which maintained the sudden death format.

Roman beat Villanova in the sprint once more, and the energy of both teams was through the roof. Arroyo had an incredibly powerful shot quite a distance away from the goal but the goalkeeper was able to block it and Villanova had possession. This possession was critical to the Wildcats because they were able to take the ball to the Dragons’ goal and finish a shot in the lower left corner.

The match ended with a final score of 11-10 with the Wildcats prevailing over the Dragons.

Roman felt like the team did “so well” and that their participation in tournaments has helped them really come together and create a “super emotional and powerful” energy.

Rogers was also proud of her team’s progress and felt that they “put up the closest fight we could.”

First-year head coach Victoria Lee went as far to say that “this [was] their best game yet.”

The Dragons’ stellar regular season play has paid off thus far and they will be moving on to California Interscholastic Federation playoffs.