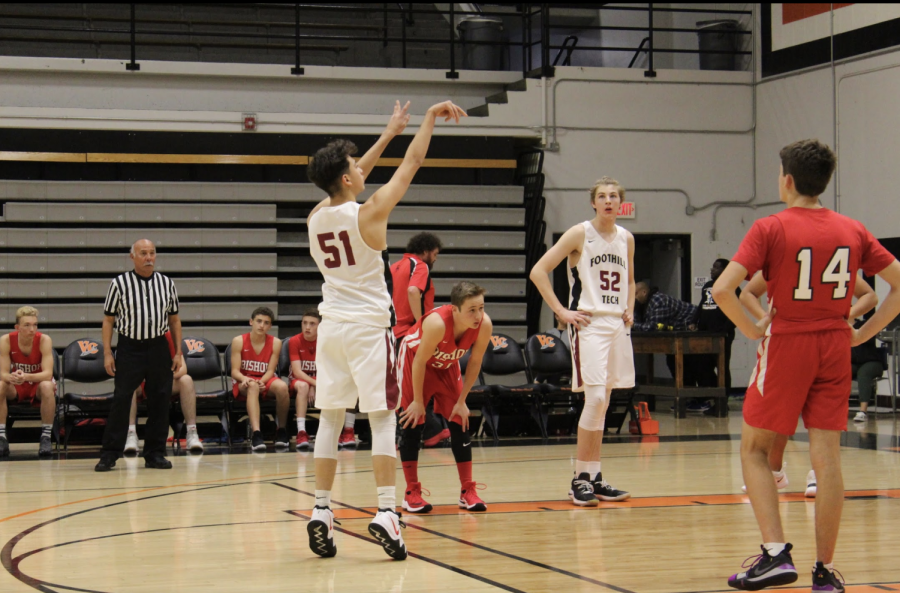 “Tonight is a special night,” fan and announcer Jill Vallance ‘20 spoke into the microphone.

“We will take a moment to honor our senior boys’ basketball student-athletes and their loved ones for their dedication and commitment,” she said.

Jan. 23 marks the last guaranteed home game of the season for the boys’ basketball team. For the team’s four seniors (Nate Bova ‘19, Jagger Dadigan ‘19, Ian Ingram ‘19 and Jack Vielbig ‘19), it could be the last time playing for the home crowd, the last time to make a basket on that familiar hoop and the last opportunity to “protect their house.”

With “fatheads,” honorary banners and a few words about each senior, the team had an opportunity to relish the moment before tipping off against Bishop Diego.

The camaraderie of the night seeped into gameplay, as the Dragons got off to a quick 9-0 lead, with layups by Dadigan, Vielbig, and Ingram.

Bishop Diego showed some fight and hit back-to-back threes, but that would be the closest they came to a lead. Vielbig and Ingram worked for shots inside to expand the lead before a Cardinal timeout with two minutes remaining in the first quarter.

The Dragons lost no momentum after the timeout, as Bodhi McDonald ‘20 scored on the next possession. Vielbig hit a three-pointer to close the quarter, giving the Dragons a 12-point lead.

The second quarter was the underclassmen’s time to shine. Sam Shinsky ‘20 made back-to-back layups to kick off the quarter.

Brian Holloway ‘21 got hot shortly after, with two three-pointers and a layup in under a minute. He came back with another three just a minute later.

Justin Razo ‘21 contributed two free throws while Ty Macias ‘21 added two more points. With a free throw from Ingram, the Dragons scored twenty points in the quarter while holding the Cardinals to six points. This set the score at 38-13 at the end of the first half.

Head coach Dean Prophet recognized the high level of performance from all players.

“Brian played exactly how we envisioned him playing throughout the year,” he said. “We were fortunate he was hot.”

“I don’t even know if Sam had a turnover,” he added, complimenting Shinsky’s ball handling.

However, the upperclassmen are always setting the example. At halftime, he asked the team who was working the hardest. They all answered: “Ian.”

“Well, you guys play that hard and play that extra step in the second half and we’re going to be okay,” he said to them.

The Dragons continued to expand the lead in the second half with more contributions from Bova, Shinsky, Dadigan, McDonald, Razo and Macias. Every member of the team put up points to lead the Dragons to a 73-27 win.

The game displayed all the best parts of Foothill’s team.

Other seniors echoed his sentiment of unity:

“It’s really good to play with them and be on the stage with them,” Ingram said of his fellow seniors.

With tears in his eyes, Prophet said that he’s going to miss all the seniors.

He wants them to know that “it’s been great having them on the team and in the program and their futures will be great if they continue to keep their level heads and keep working on everything they do.”

Jack Vielbig ’19 is a sports writer for the Foothill Dragon Press and had no involvement with the production of this article.