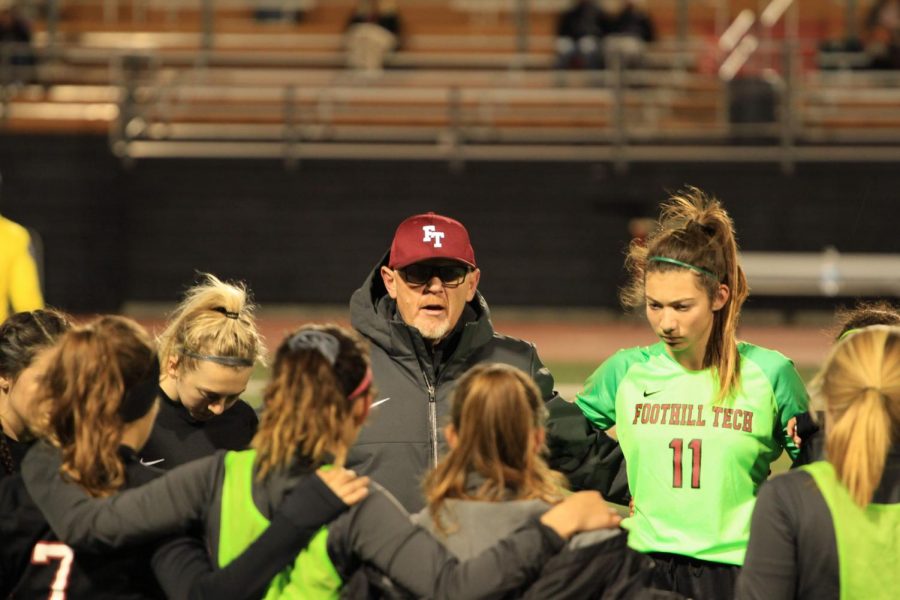 Head coach Jack Craig talks to the girls prior to the game. Credit: Ethan Crouch / The Foothill Dragon Press

On the evening of Jan. 14, the Dragons didn’t let the rain deter their spirits and came out to play an energetic and physical game against the La Reina Regents.

Head coach Jack Craig felt that this was an important win because “we were both undefeated in league, so the fact that we were able to just take it to them [and] put them on notice that we’re gonna win league again.”

Captain Alyssa Elias ‘19 commented that the team “went into our game tonight knowing La Reina came ready to play,” but was confident that her team would match—if not surpass—the opponents, as they knew that ‘it was one of the games that mattered most this season.”

Unfazed by the cold weather, the Dragons started off strong, battling for possession from the kickoff. In fact, midfielder Kiera Rivera ‘21 believed that “the cold weather is great” to play in because it seems to “give you more energy.”

Although the time spent on each half of the field was fairly even, the Dragons’ first shot on goal four minutes into the game proved their determination to play hard and to win. Shortly after, Muriel Rowley ‘20 found success, connecting with a pass from the midfield and tapping the ball into the back of the net to put the Dragons ahead, 1-0.

Rivera felt that the team’s “confidence started to build up ” because their “effort was there.”

Rowley almost finished a second ball but collided with the keeper just before she could get a foot behind the ball. The Regents took their first shot on goal 12 minutes in but were deterred by keeper Keara Fitzgerald ‘20. An aggressive defensive line resulted in many one-on-one and through ball opportunities to the Dragon’s forwards, keeping the intensity up all game.

Elias reflected that the team “executed our plan, connected the ball,” and“created good combinations that led to goals.”

Although Craig was excited because they “had 19 players dressed, and all 19 contribute to the success of the team,” the cold weather affected the transition from the bench to the field.

Four sets of fresh legs were subbed into the back line, but because it is hard to replicate the initial pregame warm, Craig noticed a “drop of play.”

According to Craig, “it takes them mentally out of the game a little bit because they’re thinking about being cold,” which meant that their altered defensive strategy took longer to become effective.

The half ended with a Dragon foul in their own box and a Regents penalty kick that soared wide right.

The second half started off with the Regents fighting to get back even and to put in a goal of their own. An overly reactive defensive line afforded the Dragons many one-on-one opportunities.

Due to strong possession from the middle of the field by Rivera, Ava Sivoraraj ‘20 connected with a crossed ball to put Foothill ahead 2-0, less than two minutes into the second half.

Starting strong “let us relax into our game plan,” according to Elias.

The Dragons settled in, as their opponents were unable to settle down and possess the ball. A free kick opportunity for the Regents just outside the 40-yard box was picked up by Fitzgerald and quickly sent down the field by a long dropkick. The offensive push fueled Elias’ through two defenders and was placed just past the keeper for her second goal of the night.

Craig described it as “one of the best performances of the year.”

Meanwhile, Rivera noted that “we actually played today not as individuals, but as one.”

Elias concluded that “overall, [we] had some really successful moments tonight.”

Editor’s Note: Muriel Rowley is a photographer for The Foothill Dragon Press. She was not involved in the reporting or publishing of this article.