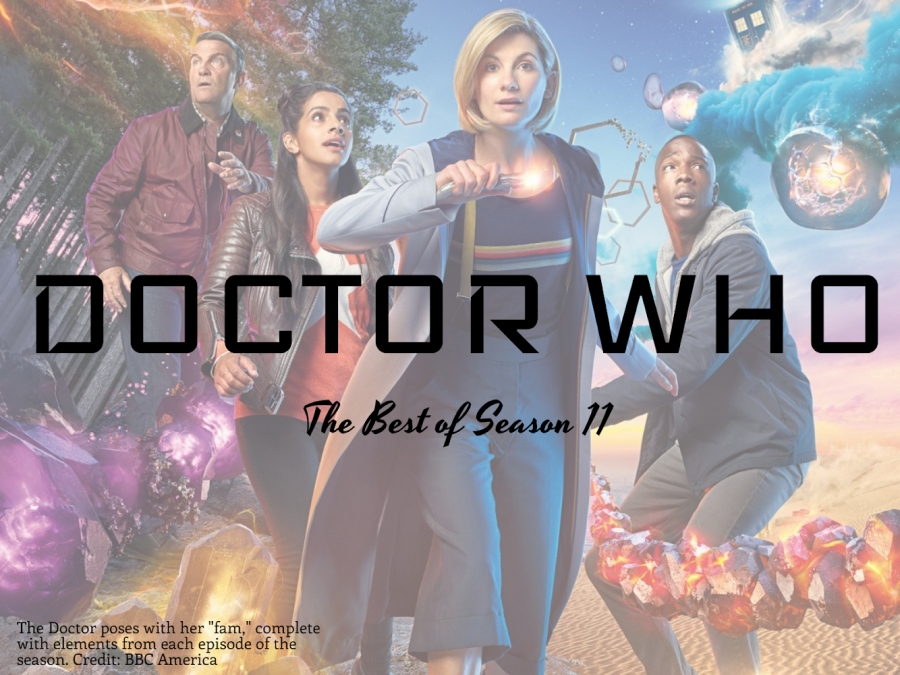 The Doctor poses with her "fam," complete with elements from each episode of the season. Credit: BBC America

With a single 55-second video airing on June 16, 2017, shock waves reverberated throughout the science fiction community as the first female Time Lord in the history of the classic sci-fi series, “Doctor Who,” was revealed. Now, more than a year later, fans of the time-traveling madman-with-a-box have finally had a chance to see the highly anticipated 13th Doctor, played by Jodie Whittaker, in action. Although she was met with some trepidation (however, more prominently, euphoria) from the fanbase, Whittaker delivered a marvelous performance with energetic, eccentric and quintessential Doctor charm. From start to finish, Season 11 was a riveting, striking and altogether political journey that took great strides in not only the show’s representation of gender and race, but in science-fiction as a whole.

First airing in Britain in late 1963, “Doctor Who” has been breaking boundaries in science fiction for over 50 years. When the original actor for the Doctor, William Hartnell, left the show unexpectedly due to health problems, the writers developed a trait of the Doctor’s alien race, the Time Lords, that ensured “Doctor Who” could, by all means, last forever—if the show remained relevant and desired by its fanbase. It’s called “regeneration,” and it essentially means when a Time Lord’s body dies, their cells will regenerate and form a completely new, functioning, unique and, most importantly, living body for the Time Lord. The regeneration process changes everything about the Time Lord from their physical appearance to their personality, while still keeping their memories and their core beliefs.

Well, at least that’s the way it goes for the two Time Lords we know, the Doctor and the Master. The rest of the Time Lords died out. This allows writers to create a completely new “Doctor Who” every time the Doctor regenerates, and that is exactly what Chris Chibnall, the new writer for “Doctor Who” (writer of “Broadchurch” and the “Doctor Who” spinoff “Torchwood”) does with Whittaker’s first season as the Doctor. In fact, the usual cosmetic adjustments (the Doctor’s appearance, the TARDIS interior, the show’s signature aesthetic and the like) the show normally underwent under Russell T. Davies (writer for the 9th and 10th Doctors) and Steven Moffat (writer for the 11th and 12th Doctors), were not the only aspects of the show that underwent a transformation. No, the very fiber of the show’s writing was altered when Chibnall and Whittaker took the stage. The quirky space drama went from entertainment to something more. Something fun to watch, of course, but also a political commentary cloaked in a charismatic Time Lord and a blue box. Everything about “Doctor Who” now has some meaning, some cultural relevance, hidden behind the relatively straightforward plot on the surface–the tip of the iceberg, if you will.

Arriving on the heels of the Master’s (the Doctor’s archrival) gender change in Peter Capaldi’s era, Whittaker’s Doctor is the most prominent example of this new political commentary at a glance. She is the first female Doctor, of course, and as such is a statement all on her own; everything about her was to be scrutinized and compared closely with previous Doctors by the fans—no matter the intent—on account of the gender change. Chibnall had to be careful about how he wrote Whittaker’s character. But the fact of the matter is her gender makes absolutely no difference in the overall narrative of the season, apart from a witty quip or two about changing pronouns, and this is truly a testament of Chibnall’s excellent writing.

The 13th Doctor is simply the Doctor; her personality is completely ungendered. She does not exhibit traits traditionally feminine nor masculine, and that is the best part of her character. Her outfit depicts her genderless character as well, sporting non-gender specific culottes, suspenders, a T-shirt and an amazing coat. This marvelous new breed of female representation in science fiction sets a new precedent for female characters in any kind of entertainment, or any character, really; rather than being concerned with giving them “masculine” or “feminine” qualities, writers should focus on creating characters with personalities unsubscribed to stereotypical characteristics to their gender, and instead create characters that are their own person. If characters in the entertainment industry were all written like this, women, people of color and people of the LGBTQ community would be much less likely to feel marginalized, misrepresented and underrepresented.

The Doctor’s ungendered personality is mirrored in the characteristics of her companions, Ryan, Graham and Yasmin, as well. Her three friends fly in the face of the show’s tradition of mostly casting conventionally pretty, white women as the Doctor’s companion in the best way, as each represents a minority demographic in entertainment. They, like the Doctor, represent many “firsts” in “Doctor Who.” Ryan is an Afro-British young man, Yasmin is a Pakistani young woman and Graham is an elderly man; all three are underrepresented in entertainment, and all three are lovable, witty and not stereotyped in the slightest. Their diversity is the not ruling parts of their personality but rather celebrated, like Yasmin’s heritage in “Demons of the Punjab,” or used to push a political commentary, such as Ryan and Yasmin’s ethnicities in “Rosa.”

What’s more interesting about Ryan and Yasmin is the company they find themselves in—the only colored companions of the past being Mickey Smith, Martha Jones and Bill Potts. They weren’t bad companions, nor were they poorly written; they were much like Ryan and Yasmin. In fact, the diversity of the companions have continued to improve throughout the series, coming to include not only colored characters but characters of different sexualities, such as Madame Vastra and her wife Jenny, Captain Jack and Bill Potts. However, their impossibly small numbers compared to the massive majority of companions that are white and straight really raises the question as to whether including a token colored companion every so often is really enough to call it “diversity.” Fortunately, as the years progress, “Doctor Who” has continued to improve its casting choices, and Ryan and Yasmin are a testament to the change the writers of “Doctor Who” have been implementing since its revitalization in 2005.

Throughout the season, this diverse cast finds themselves in the midst of an assortment of adventures that are exciting, entertaining and full of political commentary. From tackling racism in the 50’s American south to addressing the threat corporations such as Amazon have on society, the season provides what could be considered the most politically thoughtful collection of episodes “Doctor Who” has ever seen. Chibnall and Whittaker are truly the new dynamic duo of science fiction and are setting fantastic new precedents in the genre as well as elevating the show itself to new heights as a platform for social change. Season 12 is due to air sometime in 2020, so it will definitely be a long wait to see more of them. However, if Season 11 was any indicator of the quality to come, then it is definitely worth the wait.