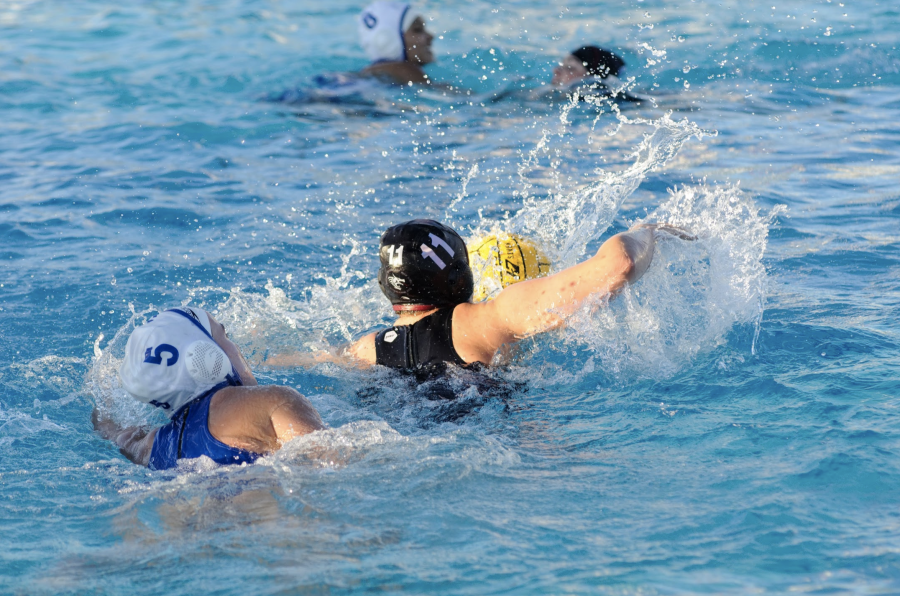 On Dec. 11, the varsity girls’ water polo team hosted the Rams of Cate High School at the Ventura Aquatic Center pool. It was the team’s first home game of the 2018-19 season and there was a sizable crowd in attendance to support the Dragons. Playing in front of their home crowd, Foothill did not disappoint in the slightest.

The Dragons’ offense came out of the gates firing on all cylinders, but after jumping out to a 15-1 advantage in the first half, the scoring stalled dramatically. When the final buzzer sounded, the scoreboard read 16-2 in favor of the Dragons.

The Rams scored the opening goal, but that would be the only time Foothill trailed in the entire game. In the first quarter alone, the Dragons responded with seven scores; Annika Arroyo ‘20 had four of the seven Foothill goals.

The next quarter was no different: the Dragons continued to build a lead that would prove to be insurmountable for Cate. Three scores in the first three minutes of the second quarter pushed Foothill’s lead to 10-1. Combined with their 11th goal of the contest coming midway through the quarter and three more in the final minute of the first half, the Dragons took a 14-1 lead over the Rams into halftime.

In a game that had quickly turned uncompetitive, first-year head coach Victoria Lee explained her philosophy to display good sportsmanship against the opponent.

“So my rule of thumb is I usually like to keep [the score margin] below fifteen in blowout games like this, and I usually tell my girls [to] think of it like a practice. So that was why I was still screaming ‘drives’ in the fourth quarter even though we weren’t so set on goals,” she said. “I told them to just pass it around, talk to each other, to […] basically think of it as a practice at this point.”

In agreeance with her coach, Arroyo said that a runaway game is an optimal time “to work on the basics and it’s a really good practice for in the future games, where we have harder competition.”

The second half featured only three goals scored by both sides, compared to 15 in the first half. Sandwiched in between a third-quarter Morgan McKillican ‘20 goal and a last-second Dragons score in the fourth quarter, the Rams scored their second and final goal of the game late in the fourth quarter. The final score was 16-2, signaling a league victory for Foothill in their first home game of the 2018-19 campaign.

Referee at girls’ water polo home league matchup vs. Cate is dressed for the occasion! ? pic.twitter.com/bSpbddaz6P

“There were still some things that they obviously need to work on, because our team’s not perfect quite yet, [but] it was a good practice for both us and Cate as well,” she said.”

Regarding the road ahead, Lee feels “excited” about what’s to come from her team in the next few weeks against tougher competition such as Villanova Preparatory School and Malibu High School.

“We’ve actually been lucky enough to play Malibu and Villanova in our Mistletoe Tournament and we only lost by four and three, so it’s gonna be a super competitive game for sure and I’m very excited. We play Malibu next Tuesday and Villanova in the new year,” she said. “There’s always something to work on, I feel that I’m definitely very optimistic about where my girls are at right now, with just little tweaks that we have to change. They’re getting that confidence in them and working as a team which is all I could ask for.”