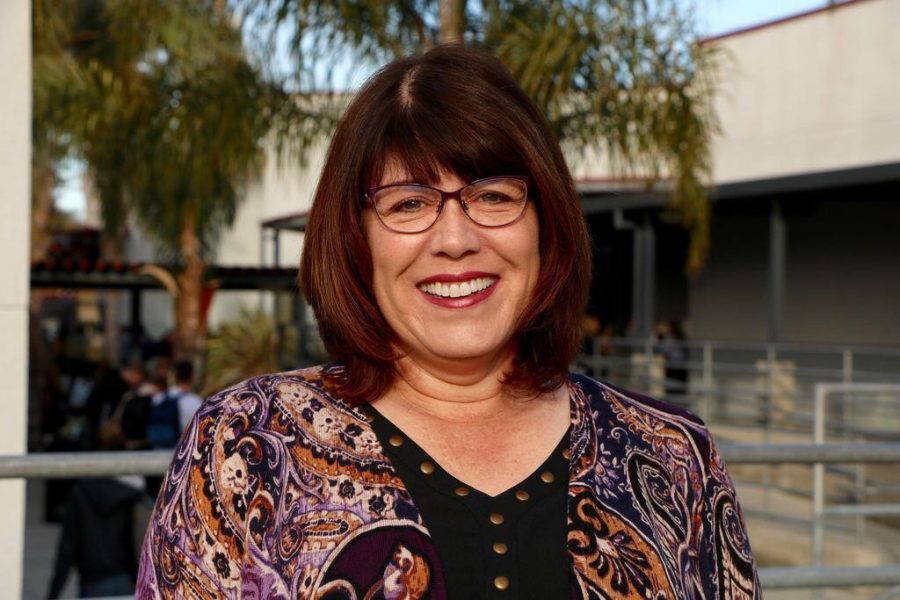 Lisa Harvill, one of Foothill’s assistant principals, had received a phone call from her daughter on Dec. 4, 2017. She called wondering if Harvill knew about the fire in Santa Paula and the voluntary evacuation announcement in Clearpoint, where her dad and stepmom live. By 9:00 p.m., Harvill’s son had called to inform her that the fire was only getting worse, and he was on his way to pick up Harvill’s parents. Harvill and her husband were already ready for bed, but they quickly got up to meet him there.

Once they arrived, her parents evacuated to Harvill’s house which is off of North Ashwood Avenue, but they were evacuated from her house soon after. The fire had burned down a house above them on Foothill Road.

“It’s interesting what you take, when you all of the sudden have to leave,” Harvill said.

They packed clothes, medicine and photographs. From her house, they took refuge with her children who lived in the Todd Ranch condominium complex.

However, her husband, son and son-in-law decided to stay at her house for several days. They would hose down the house and keep watch, especially with the warning of looters.

The next morning, Harvill’s brother-in-law called her husband after seeing her parent’s neighborhood on the news as a harshly hit area. “My husband and my boys decided to drive over there and they saw that my dad’s house had burned down,” Harvill recalled.

The next thing to do was to tell her father. “We just walked over there and that felt like the longest walk of my life,” Harvill said.

It was one of the hardest things she had ever done. When she walked in, his immediate concern was for her, wondering if her house burned down. But, when she told him the news, “he just started crying and I was hugging him and I was upset and my husband— I mean it was awful,” Harvill said.

He had immediately thought of his wife and how much this would hurt her. She had been living there since the mid-80s. “It was horrible that so many homes were burned, but at the same time we were so thankful that more people weren’t hurt. The two lives that were lost, were two lives too many, we were so grateful that it wasn’t more,” Harvill said.

When they went to visit the house, it was still smoking. “It looked like a bomb had gone off in that neighborhood. All you would see were chimneys [and] shower stalls,” Harvill said.

Harvill also spoke about her experience with the firefighters, who were so kind and sorrowful: “they were very gracious and you could tell how sad they were that they weren’t able to do more,” Harvill said.

Her dad and stepmom acquired a condo to live in while they wait for the rebuilding of their house. The rebuild will most likely take a couple of years.

“It starts with the debris removal and getting all the permits and things that are required for that,” Harvill said.

There are so many decisions to be made, which contributes to the stress of it all. “Everything requires logistics.”

Seeing that her parents are in their 70s, she’s been worried for their well-being and health, “but I’ve also seen such resilience in them and such strength in them, in spite of all the challenges. They seem to be doing as well as to be expected,” Harvill said.

Harvill noticed how it has disrupted everything about her parents’ lives. Her dad loved his garage, which was his own man cave, where he worked and tinkered. Harvill mentioned he was previously a tool and die maker, which involved a lot of tools that he planned on handing down to their son. They had all been lost in the fire.

Harvill helped to itemize everything he had and replace what was lost. “I’ve never seen a man so happy over a set of wrenches,” Harvill said.

She feels it’s important to do this for him because his tools were a part of his livelihood and legacy.

When she started replacing his belongings and surprising him with tools, she recalled how, “I could see in him a little bit of a spark, a little bit of a light and I feel like, to begin to start over, that’s where the hope comes in.”

“It is just stuff, but it’s stuff that belonged to them and that was personal to them and meant something to them,” she said.

“My dad will say the most important thing out of all of this is his family.”

Since the fire her son has been able to spend more time with his grandpa. They have also gotten support from community members, friends and church members, “[who] have just been very generous and gracious with them and they’ve really appreciated that too,” she said.

“In a way I wasn’t directly impacted because I didn’t lose my house,” but it is hard not to be impacted when those you love are so significantly affected, Harvill described.

“I’ve learned that such stressful events can either bring out the best in people or can bring out the worst in people. […] I can’t claim to be affected in the way that the people who lost their homes were affected,” Harvill said.

“What I’ve gone through is nothing compared to what people who really suffered with their own losses [went through]” she expressed.

To be kind and careful about the way things are said is important: “without intending to be hurtful, you [still] can be,” she remarked.

“Bottom line: I love them,” she said.

“I just try to be really thoughtful in how I approach things and it doesn’t always come out the way I want it to, but the gist is I really love them and care for them and want the best for them,” Harvill said.

“When people say, ‘oh it’s just things, you have your safety’—it is just things, but like I said, when it’s your things and when you’ve lost them it doesn’t feel like just things,” she described, as it is the memory attached to it that makes it feel like more than just stuff.

“I think the intent of that statement if somebody makes it is: ‘thank God you’re safe, thank God nothing happened to you, and it was possessions that were taken from you, but your life wasn’t taken from you and I’m happy still to have you.’”

Ultimately, losing one’s most personal things is not easy to deal with. It might make one cry or hurt an unimaginable pain.

“My dad has been really strong.” She’s always had a close relationship with him, but the fire has in many ways has brought her even closer to him.

“When it’s you that has lost your things it’s really hard.”

The things her dad enjoyed and how he passed time are no longer there. Currently, he volunteers every Tuesday and Thursday in D-Tech, a Foothill academy and class. “He’s able to share his expertise with the students and it has filled a gap for him, I think,” Harvill expressed.

Harvill described that the students in D-Tech “have been so amazingly wonderful with embracing him and welcoming him. He feels really good about the kids and he has nothing but positive things to say.”

Spending time with his sons and golfing has also helped: “I think that’s the one possession that he’s replaced since the fire that has been giving him a lot of joy, is to get a set of golf clubs,” she said.

Her parents still plan to rebuild. They have submitted permits and have the land prepared for construction. “They’re excited, anxiously awaiting,” and are confident in their builder who they have a close relationship with.

As for the amount of time it will take, Harvill isn’t sure.

With the recent Camp Fire in Paradise and the Hill and Woolsey Fires, she’s experienced a “heightened sense of anxiety” and “the anniversary of [the Thomas Fire] coming up—it’s thought provoking—it’s making me think in terms of my parents who lost their home, how that anniversary going to be for them.”

For family and friends trying to support someone who lost their home, she advises to be sensitive to what they’re going through and “more than anything, be there” for them.

Even though, the recent fires and smell of smoke in the air had brought back some unpleasant memories, she feels good. “I just want to continue to support the students who have lost their homes and my family.”