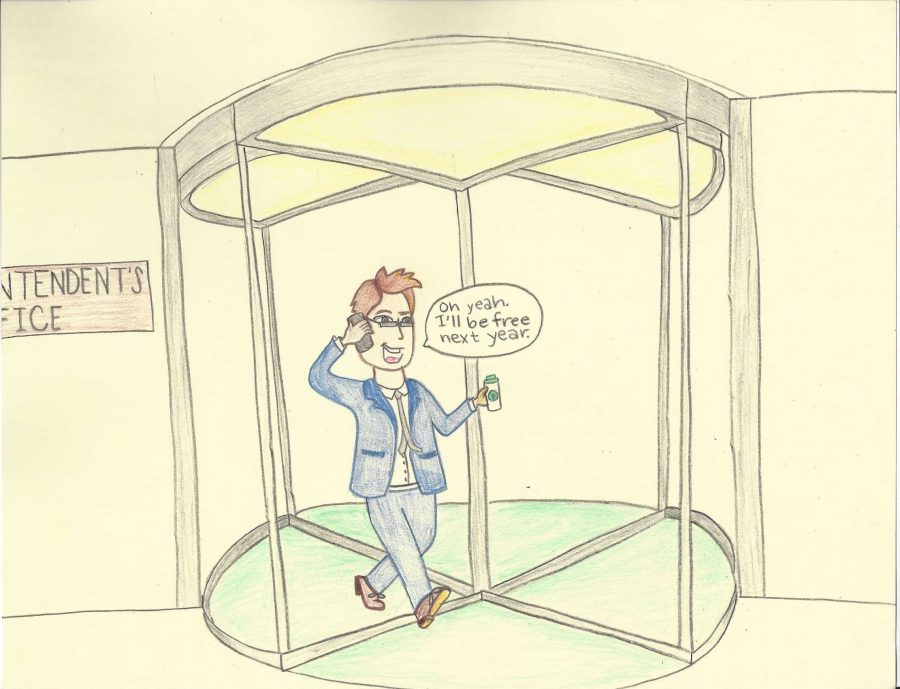 Superintendents in the Ventura Unified School District seem to walk through a revolving door, serving shorter and shorter terms as time goes on. Credit: Abby Sourwine / The Foothill Dragon Press

In the last four years, the Ventura Unified School District (Ventura Unified) has had three superintendents: two full-time and one interim. David Creswell is the only one I’ve ever even seen in person.

I first met Creswell last year. He spoke at a Ventura Unified meeting shortly after the Thomas Fire erupted and ravaged our town. Though he was relatively new to the superintendent position, I felt he handled himself well, presented conscientious plans to help affected students and made our community feel as safe as possible considering the circumstances.

Since that day, I’ve seen him at a school board meetings and exchanged chit chat a number of times.

Creswell has now announced plans for his resignation, and before long I will see the fourth superintendent of my high school career.

When did the superintendent seat become a pit stop? How am I, a student, supposed to solve the issues in my community if I’m always chasing leaders out the door?

Foothill students recently did take an issue to the school board: Pride Week. The board acknowledged it and made a promise to elucidate on their handling of the situation. However, the focus quickly shifted from the topic students originally took issue with to the opinions of one man. A board that promised to fight for students fed the same hatred they sought to expel.

This isn’t what students need.

We need strong, compassionate leadership. We need a superintendent we can trust to work with students and administrators to serve the school district with integrity. We need someone to form a working relationship with. We don’t need another two-year seat filler to boot out at the first sign of trouble.

This is a lost opportunity for our community to rise above our differences and focus on creating a safe environment for students of all backgrounds. This was a chance at growth, at meaningful dialogue, at change.

Now, what we have is no leader and no clear path forward. We have a good man forced out of his position for ideologies which were never displayed in his policy-making.

I’m not saying that Creswell was the man we needed; I’m just hoping that the next superintendent will be.

I hope that when the next superintendent is chosen, their background will be examined thoroughly. I hope that they will be reliable and representative of Ventura Unified.