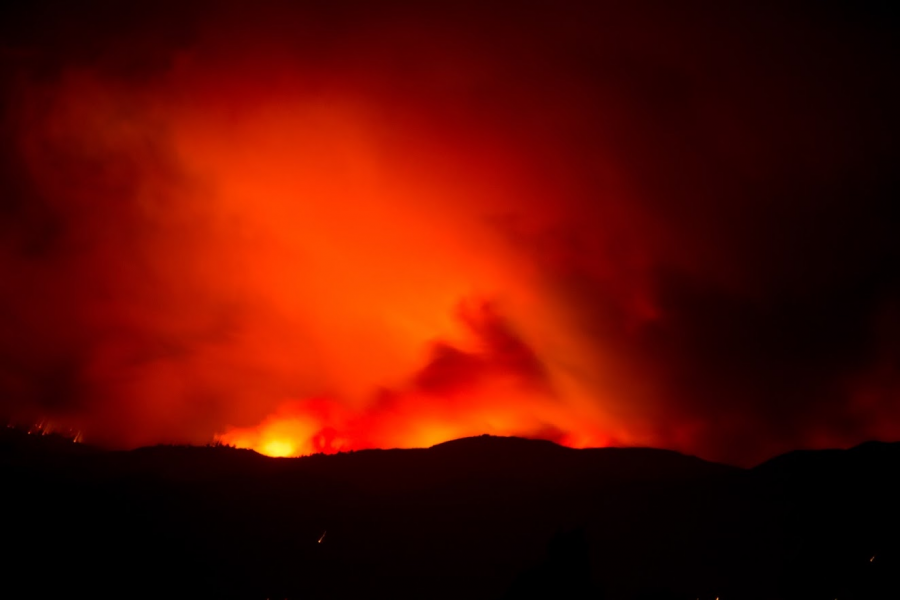 The red glow of the Woolsey Fire silhouettes the Camarillo mountain range as winds pick up. Credit: Stefan Fahr / The Foothill Dragon Press

Wake up! The past passive talking points about climate change are irrelevant. We are not experiencing a “global warming hiatus” such as one that allegedly occurred between 1998 and 2012. Climate change is real! It is not a nightmare independent of reality. It is a reality.

California has also been beset by a change in the jet stream. The jet stream used to go from west to east, but as a result of climate change, it has changed direction to north to south.

While a change in wind direction may seem inconsequential, it has had disastrous ramifications: longer and more extreme Santa Ana wind conditions than ever before.

The combination of the drought and the change in the jet stream culminated into a disaster for Ventura: the Thomas Fire.

On Dec. 4, 2017, the “wildfire” began its reign of terror over Northern Ventura County which would prove to be an unimaginable nightmare for Venturans as the wildfire became the biggest in California’s history at the time. Nonetheless, the fire left many people questioning how this could happen to Ventura.

A year later, SoCal Edison admitted that mismanagement of their equipment sparked the Thomas Fire. However, many more factors contributed to the magnitude and destruction of the fire.

In the 1800s, fires regularly covered California but didn’t reach as great of a magnitude as the Thomas Fire did. Before fire suppression tactics were implemented, natural fires would clear the vegetation frequently. However, with less vegetation to burn, wildfires were less devastating. However, after the implementation of these prevention tactics, there was a distinct drop in the number of fires. Consequently, vegetation accumulated in forests and hills, which in turn left more fuel for fires to consume and expand.

Thus, while these tactics appear to be logical at some point (less fires are better), they have assisted in amplifying the devastation of the Thomas Fire. The devastation included 100-foot tall tongues of flame devouring anything that stood in their ways─ there was little the firefighters could do.

But what made the fire so devastating? Fires in the past have been more easily contained than this one. The answer lies in California’s large population of about 40 million. As there are more people, more housing is needed. Since most of the easy, reliably safe housing spots have been taken (such as the ones out in the open), people venture further into the unsafe zones (hillsides, etc.) in order to provide all of the housing that the population in California needs.

Take for example the development on Andorra Lane in Ventura. The development had been in construction for years until it was completed in the year before the Thomas Fire. This development had been pushing up against the hillside to provide the extra housing that Ventura needed. However, after the fire now, there remains nothing but burned out bases of the houses that had stood there.

While Edison may have started the fire, they aren’t the only ones to blame for it.

Ventura was left with two types of effects after the Thomas Fire: immediate and long-term.

The immediate impacts were in the air quality. For two weeks, Venturans were forced to wear face masks to prevent inhalation of particulate matter from the smoke. These effects─respiratory irritation and shortness of breath─ were most detrimental to people with asthma or the elderly. Other temporary health effects included eye irritation, nausea, reduced alertness and nasal irritation.

The heavy rain that occurred weeks after the Thomas Fire resulted in a mudflow near Montecito. Due to the fire, the soil had been heated up and solidified in the cooling process. This created a hard surface unable to be penetrated by liquids. Thus, the rainwater slid off the soil like ice and collected itself and top layer dirt. The mudflow caused structural damage and claimed multiple lives.

The long-term impacts begin with the devastated wildlife along the hillside. While the larger animals are able to escape the danger, smaller creatures are deterred by their size and inability to cover much ground. The population of creatures includes rabbits, mice or juvenile coyotes. As a result, a reduction of these creatures will impact the food chain in the long run. Without the small creatures, the bigger creatures won’t be able to receive the nutrients found in plants such as nitrogen or phosphorus which can affect the ecosystem of Ventura.

In addition, the hillsides have not been able to recover from the fire as they had not experienced such change for years and will need time to adapt to the changes. In addition, there is a low probability that seeds will sprout and grow due to the lack of rain in Ventura.

In order to avoid these effects, measures must be placed. However, there is no easy way to prevent a fire. Fire is something that humanity has tried to prevent. As the most recent fires plaguing California suggest, there is no definitive answer to controlling them. As a result, there are only strategies to minimize the damage of fires.

One of the easiest ways to limit the damage of fires would be to move out of the foothills. As more humans populate the planet, more housing is needed which leads to construction being pushed into the foothills. This is ineffective, as people would not be willing to give up their homes as housing conditions in California are not suitable for many.

Thus, prevention of fires turns in a different direction. Currently, the fire prevention strategy is to create control burns in order to control the spread of fire. However, based on the multitude of large fires that have occurred in the past year, the strategy obviously isn’t working all too well. The solution then is to increase control burns near the foothills which will minimize the chance of fire spreading into the suburbs in the future.

As mentioned earlier, the Thomas Fire was a product of rampant human-caused climate change. Thus, a measure of prevention is imperative to limit the severity of climate change. However, for the largest effect to be had against future fires, action must be taken on the state or federal level. Indeed, research has been done that stresses immediate action to be taken against climate change in order to combat the increased risk of destruction that comes from the climate that we’re living in.

But President Trump disregards these findings. He’s cut back regulations against coal mines and coal power plants, all in the names of jobs as well as the idea of climate change being a Chinese hoax. But coal, a fossil fuel, produces greenhouse gases that trap heat in the planet, exacerbating the problem. Additionally, climate change has widespread consensus (97% or more) by most unbiased scientists, that it is indeed humans who are causing this change.

However, backed by money from coal and oil advocates, the GOP has refused to take measures against climate change. As a result, the GOP has ignored the consensus against human-caused climate change and has continued to support President Trump’s agenda of destroying the climate.

It’s time for the general public to take a stand and wake up and face the nightmare of climate change. Though it may be easier to kick the can of climate change further down the road, the only way to even potentially limit the possibility of another Thomas Fire and other future disasters is to limit the effect of human-induced climate change through political action.