A year after the Thomas Fire, financial impact still staggers 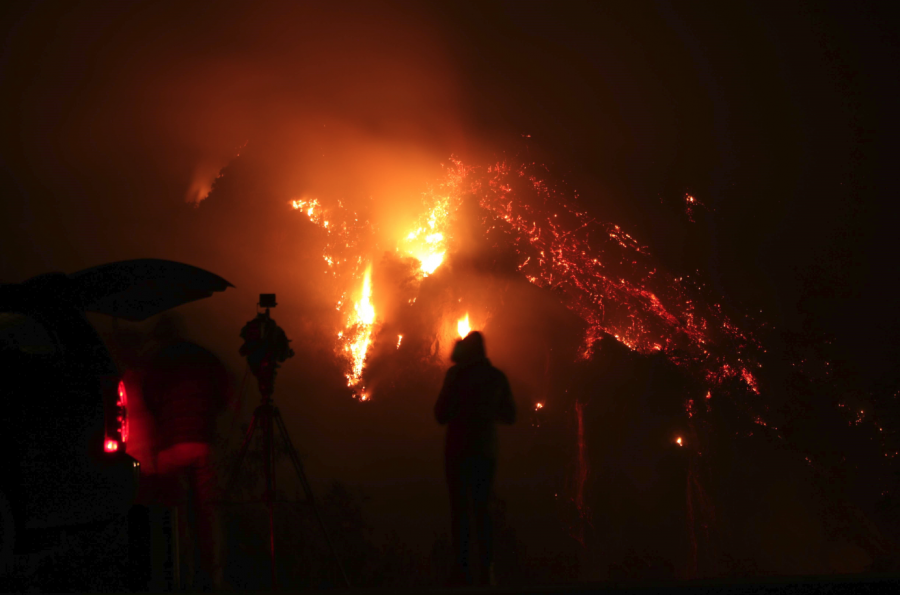 News reporters watch as the Thomas fire spreads into the western hillsides across from the Ventura Avenue. Credit: Stefan Fahr / The Foothill Dragon Press

Almost a year ago, the Thomas Fire broke out near Thomas Aquinas College in Santa Paula. Due to “the strongest and longest duration Santa Ana wind event we have seen so far this season,” according to the National Weather Service, the Thomas Fire moved at almost an acre per second during certain periods, enabling it to consume a staggering 281,893 acres of land by the time it was fully contained on Jan. 12, 2018.

However, just because the fire is long extinguished does not mean its effects have diminished. With about 16,015 tons of crops lost and 1,060 structures destroyed, the fire rendered the physical damage to Ventura County among the greatest in California’s history. Financial recovery is now at the forefront of restoration and reconstruction.

According to a statement made by the Agricultural Commissioner on the Board of Supervisors for Ventura County, the estimated damage from the Thomas Fire to “current and future crops, machinery and equipment, dwellings, service buildings and other structures due to the fire is $171,296,703.”

Another way in which Ventura County was fiscally impacted was through the loss of educational time during the fire. Due to the positioning of the blaze and the amount of smoke in the atmosphere, Ventura Unified School District (Ventura Unified) closed all schools and district offices from Dec. 5th, 2017 to Jan. 8th, 2018.The last two weeks of those were part of the district’s Winter Break.

“The state reimbursed [the district] for the closure days. Typically, we’re only funded when students are in attendance,” said Ventura Unified’s Director of Business and Finance Betsy George. The amount of funding is calculated based on days school is in session and the amount of students who attend.

Ventura Unified also applied for some special relief for the low attendance days during the storms in the second week of January and the middle of March.

“We have received relief for January, but have not received notification for the March days,” commented George.

“The out of pocket costs for the cleanup, really from the smoke damage, is an insurance claim we made to our insurance carrier and they’re covering those costs,” said George.

Ventura Unified has also applied for relief from the Federal Emergency Management Agency (FEMA) on costs not covered by insurance, but have yet to receive information on whether funds will be granted.

The financial effects of the fire are especially felt in the classroom. Total enrollment in Ventura Unified schools dropped 2 percent since the beginning of the 2018 school year.

“A lot of those houses—they aren’t trying to rebuild but instead sell the lots. I think that decline in enrollment is a long term impact,” said George.

However, in terms of preparedness for the Thomas Fire, George believes that Ventura Unified was well prepared. Since Napa County had experienced similarly large fires in October earlier that year, Ventura Unified “reached out to those school districts right from the get go,” stated George.

“We were using their experience and took all the measures we could.”

These early steps allowed the district to take preemptive measures to safeguard against potentially even greater financial losses.

“We didn’t have to necessarily figure out what we had to do on our own,” elaborated George. “We had that support and that knowledge from people who had done this before us, and that was so valuable.”