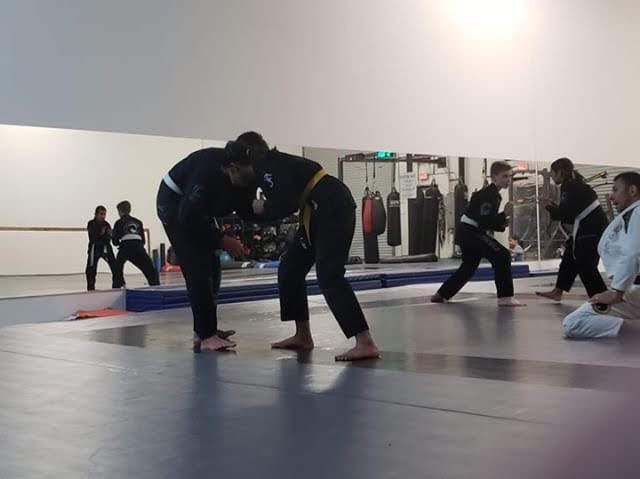 Brazilian jiu-jitsu falls into both categories of martial arts and combat sports, where competitors routinely grapple on the ground while attempting to take down their opponent.

Participants must wear a “gi”, which is a two-piece uniform, similar to what is worn in other martial arts like karate, that enables fighters to attempt certain takedowns and chokeholds. The sport utilizes complex techniques and body positions in order to ultimately get the opposing fighter to “tap out”, signifying their inability to escape a particular submission (joint lock or chokehold) and marking the end of the fight.

Azael De La Torre ‘22 reflects on his experience in the martial art, explaining that “it involves a lot of technique, being strong, taking in some hits and getting kneed occasionally. But overall it’s fun and it’s very complex.”

De La Torre initially became involved in jiu-jitsu after a recommendation from a friend who thoroughly enjoyed the sport. Just seven months ago, he joined Paragon Brazilian Jiu-Jitsu in Ventura, where he regularly practices and learns new techniques.

While De La Torre is competitive in the sport, his moments of learning and his ongoing interest is mostly as a result of the benefits it brings to his everyday life. In fact, De La Torre says that his “biggest personal achievement is successfully tapping out [his] professor at times.”

“Other times, he taps me,” De La Torre jokes.

He appreciates the overall vibe of the sport as well. “They’re mostly surfers so everybody’s really nice there,” De La Torre explained. “It can get a little heated at times because you and your opponent might get mad at each other because you guys are being dirty. So at times, it can get a little rough, but most of the time it’s friendly.”

“In a negative way, I’ve kind of gotten a little more aggressive,” he said. “In a positive way, now when my friends are in trouble I can help them, and I’ve learned to defend myself and respect people because I truly don’t know what they know. Basically, don’t judge a book by its cover because [anyone] could be more dangerous than you think.”

De La Torre says that he “would recommend this sport because it helps you with self-defense— if attacked you could pull some moves on them. You could defend yourself. […] It’s also good exercise and it’s fun.”