Mia Monsour ’21: how rowing instilled a sense of community in her 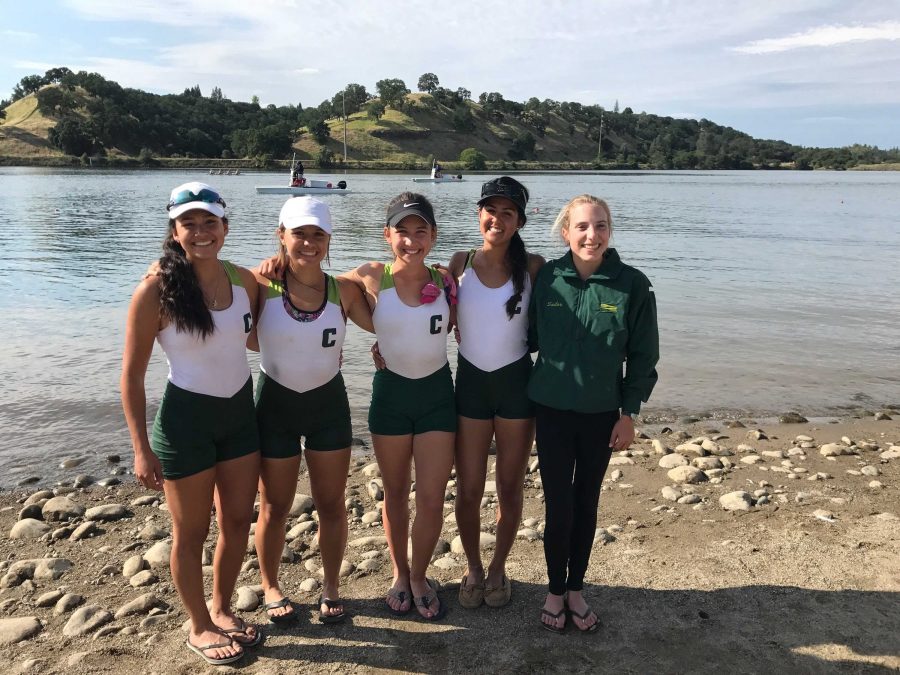 Mia Monsour '21 smiles with her teammates after a race. Credit: Dani Thole

As the name suggests, rowing is a sport where a team must row and work together in an effort to quickly get to the finish line. The boat is composed of the “crew,” the people at the oars and the “coxswain,” an often lightweight member of the team who sits at the bow, guiding the rowers and steering the boat. Rowing made its debut in the Olympics in 1990, and since then has gained popularity among late middle and high school students like Mia Monsour ‘21.

Monsour grew up playing soccer and running track, but never felt a real passion for either of the sports. During the summer before eighth grade, her friend encouraged her to participate in a summer camp through Casitas Rowing.

“I absolutely hated it,” she said. “I was horrible.”

However, the coach thought she held real potential and encouraged her to join the high school team. She began participating in novice races, but is now in her third year of rowing and on the varsity team, loving everything about the sport.

At practice, she fine-tunes her rowing technique and works on her overall fitness. ”Rowing is hard but you need to get fit in order to do it, not really from doing it,” she explained.

For new rowers, “the first step is just learning how to row because it’s really complicated, so you need to kind of learn the basic steps. But once you get the hang of it it’s not that hard.” she said. “Fitness is a really important aspect too. We go on long runs every Tuesday and [practice] erging on the rowing machines. Just a lot of core workouts and different weights and stuff.”

Monsour had a breakthrough in rowing last year when she did her 200 meter test. “I had just improved so much from the year before—I got my time down so significantly. I feel like that was a really big step” she expressed. This year, her goal is to break eight minutes on her two kilometer race, and she feels like last year’s achievement really gave her the confidence she needed.

She really appreciates the atmosphere of the team, and feels like being a part of a rowing team has a significant effect on her life.

“That’s what I like about it so much— you form a really great bond with all your teammates because you have to be working together, you have to be in sync,” Monsour said. “You can’t have a bad relationship with anybody else or it just doesn’t work out. But also it’s a really personal sport because you have your own number, your own ranking on the team, and you want to compete with your teammates to get better. So it’s like the perfect combination of an individual and team sport.”

“It’s time consuming— like, really time consuming,” Monsour said. “It teaches you really valuable life lessons that I don’t think I would be able to go on learning without. You really build a bond with your teammates that I’ve never felt with any other sport before. I played soccer and track and I’ve never really felt as close to my teammates as I do now with rowing.”

“It really teaches you that what you put in is what you get out. You can really do anything as long as you’re putting in the amount of work it takes.”