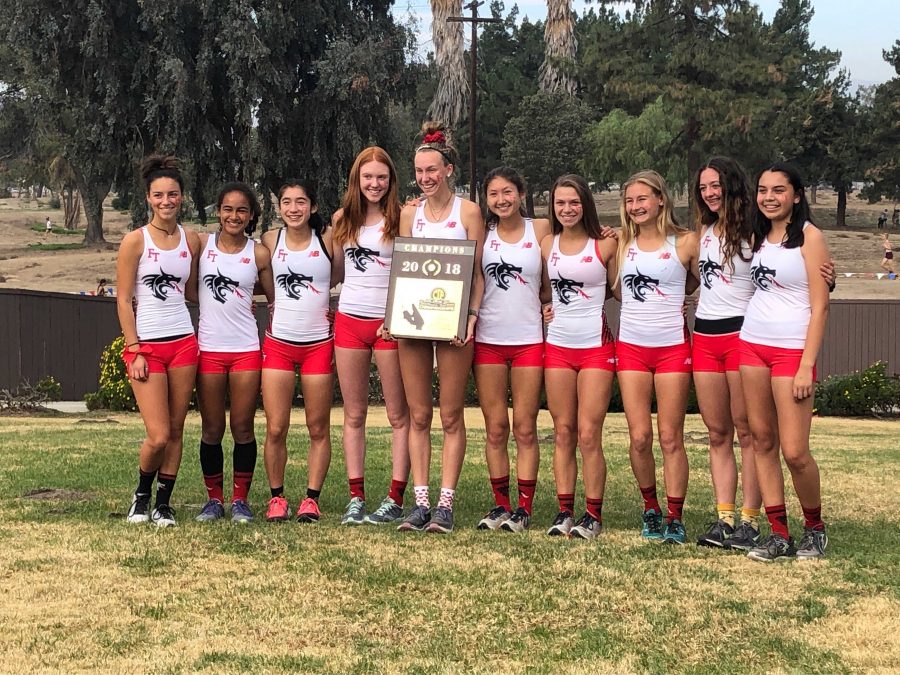 The Dragons cross country team began their journey on the road back to the state meet at CIF Prelims on Nov. 10 in Riverside.

The course in Riverside was different than what the Dragons were used to, as it was flat and almost all dirt. The most prominently difficult section of the trail is a loop right before the two-mile mark, because “there’s not a lot of people out there and it’s a long loop without a lot of terrain changes so it’s difficult to stay locked into the pace,” Gretchen Scherrei ‘20 said.

The most difficult part is staying mentally determined; Scherrei emphasized that “that’s where we focus on racing for our teammates.”

Teammates Scherrei and Sean Siddens ‘20 thrive on the fact that “the atmosphere was nothing like the local meets we usually have,” Siddens said.

There were more than just a few local teams, and some of the fastest people in the nation are competing on the same course.

This new environment is more exciting because, according to Scherrei, “it’s postseason and everyone’s stoked to be there and everyone knows they’re going to run fast.”

Siddens stated that they were surrounded by a “more intimidating and hyper-competitive atmosphere, but our team was confident that we belonged there and that we could achieve what we needed to do.”

On Day 2 of Prelims, the defending state champion Foothill Tech girls team was among 12 area cross country teams and two individuals who qualified for next Saturday’s CIF Finals. They will join the 14 area teams that advanced in Friday’s races.https://t.co/H2sWdnzreV

The Dragons also gave an impressive performance on the girls’ side, finishing third overall. Brooke Secreto ‘21 finished in 8th place and pushed a very quick pace, coming in at 18:43.9.

Transitioning into CIF Finals, Scherrei said that the team’s mindset changes because it’s “sudden death,” which makes it “more exciting because we know we have to perform.”

“The team really focuses on working together and keeping things positive, so we’re all able to feed off each other’s positive energy and encouragement,” Scherrei said. “There’s going to be extra nerves going into CIF because of the nature of the competition, but there’s also way more excitement.”

The Dragons thrive on these nerves, and for Scherrei, these high-pressure situations are her “favorite part of the season.”

Assistant coach Jason Dinkler stated that although ”we’d love to bring home a couple plaques and become CIF champions,” nothing is predetermined and these athletes will have to earn their titles.

He reflects that although “girls are highly ranked to do this,” they still must “execute.”

Additionally, the boys’ team are the “underdogs in this situation but we may surprise a few people.”

And execute they did. The Dragons returned to Riverside the following weekend on Nov. 17 to compete in CIF Finals.

The girls’ team defended their title as CIF champions. They took first place out of 24 teams, with Lauren Kearney ‘19 taking the lead and finishing third place overall at 17:26.5. Blythe Blakeman ‘19 followed close behind in ninth place, along with Hannah Dearman-So ’21 in 12th place, Brooke Secreto ‘21 in 15th place and Hana Vrablik ‘19 in 32nd place.

The Dragons finished strong for the boys’ team as well, earning 3rd place out of 24 teams.

Both the girls’ and boys’ team will advance to the state meet on Nov. 24th.

Correction: This article was updated on Nov. 21 at 3:16 p.m. to include Hannah Dearman-So’s placing in 12th.