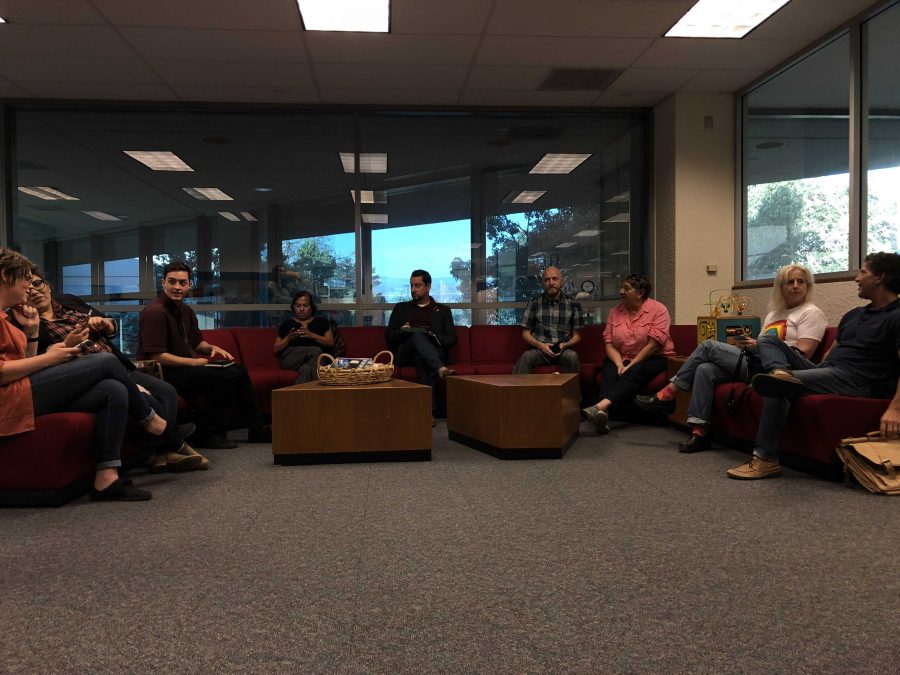 Right on the heels of the controversy surrounding Foothill’s recent Pride Week, a short-notice school board meeting was called on Nov. 16 to address arising concerns regarding a sermon delivered in 2016 by Superintendent David Creswell.

Community members took issue with the comments made starting around 24 minutes into the recording, where Creswell speaks how “our culture is constantly trying to define or redefine things for you.” He goes on to share a story about a time when he leafed through a high school yearbook that was laying on the shelf. He came across the senior superlatives page, and saw a picture of a lesbian couple who had won “Best Couple.”

He turned to the next page, which displayed a picture of a transgender girl, whom Creswell addressed as a “young man fully dressed as a girl, with the long hair, and the necklace, and the jewelry, and the makeup, the eyelashes, the dress and the shoes.” She was holding up an image of herself as a freshman, pre-transition. She had won the superlative “Most Changed”.

“There’s a growing sector of our culture—of our society—that says that’s good and that’s normal. And not only do they embrace it, we’re now celebrating it.”

He elaborated that this type of change is not his “definition” of most changed. His definition of change, he noted, was not a student who had an “eternity guaranteed in hell,” but rather one in which Christ “changed their character and their nature, so that they now have a life that’s more abundant.”

The special meeting agenda involved the traditional opening procedures, and then transitioned into a platform for public discourse on closed session items. After this, a motion was made to go into closed session for the purpose of discussing “Public Employee Discipline/Dismissal/Release,” according to the agenda.

Creswell did not attend the open school board meeting, but came out of his office during the closed session to express that he was “happy to meet with” community members and to answer any questions. He returned to his office and declined to make any comment to the Foothill Dragon Press.

At this time, the school board brought Creswell into their closed session. When they finished discussing with him, some meeting attendees met with him in his office.

Erielle Manhart, a volunteer for Diversity Collective, as well as an alumnus of Anacapa Middle School and Buena High School, said that Creswell expressed his remorse, but that “it’s tentative.” He noted that “the proof is going to be in the action.”

The school board opened their meeting to the public and shared that no action will be taken “at this time,” but that the conversation will continue, and a statement will be released at a later date.

First to give a public comment at the meeting was Lisa Burton, a 35-year Ventura resident.

“I’m here,” she began, “because I care about the values in our community [and] about our kids who self-identify as LGBTQ.”

She shared concerns about any leaders in the educational community “who express openly their intolerance,” citing the audio recording of the sermon. She hopes the school board will stand up to this type of belief.

School Board President John Walker had not heard about the audio recording prior to the meeting.

Second to speak was Matthew Haffner, who wished everyone had the chance to hear the audio before the meeting. The sermon “shocked and offended” Haffner, who was confused about how someone could hold these beliefs. He brought up that his main issue was that Creswell was not just speaking against the LGBTQ community, but that he involved high school students in his argument. Haffner conveyed to the board that “there has to be a swift and strong statement by this board.”

Jonathan Horton spoke next. He shared Haffner’s sentiment of “shock” upon hearing Creswell’s sermon. “There’s no room,” he stated, “for this kind of deeply held belief, I don’t think, in a position of power in a school district.”

He called the sermon “demoralizing” towards LGBTQ students. He hopes the school board will send a clear message Creswell’s “conclusions about people don’t have a place in our schools.”

Next to speak was Joseph Summers, the president of the local organization Diversity Collective. He shared Haffner and Horton’s shock.

“The only way that David can get himself out of this is if he said he’s changed his ways,” Summers stated. “My community will not let this go unnoticed.”

He called for training for teachers and school staff, remarking that Creswell’s comments are an example of “cultural inproficiency (sic) at its highest level.”

Summers spoke about the need for reducing high suicide rates among LGBTQ students, and places some responsibility for this on schools.

Vicente Torres spoke next, sharing about the similarities between Creswell’s remarks and his own experience growing up in a religious household, emphasizing the importance of having resources within the education system for LGBTQ students.

“Having leadership that reflects affirmative care for students will make a huge difference, not just for LGBTQ students, but on the whole campus,” he said.

Following Torres was Audrey Ford, Program Coordinator for Rainbow Umbrella, an LGBTQ youth group under the guidance of Diversity Collective. She spoke about the importance of educators becoming educated in the LGBTQ community.

“You don’t have to identify in a community to stand up and also speak up for youth who might not be comfortable,” Ford said.

The last public comment was delivered by Manhart, who shared his alarm regarding the “barriers between educators and administration and the students that they are serving.”

He stressed the importance of mediation between students and staff, in an effort to make sure administration and teachers have the tools they need to help students through “what could be one of the most difficult times of their lives.”

Walker expressed that the board knew very few details about the situation at hand.

During closed session, the community members discussed amongst themselves about their feelings regarding the meeting. Included in the group was Foothill teacher Kristen Pelfrey, who came to show her support for students.

Ocil Herrêjōn, another community member attending the meeting, imagined herself being put in the shoes of the lesbian couple Creswell spoke about and said she didn’t “understand how we can expect students to feel safe, or protected, or in any way supported when their own superintendent is saying that they’re condemned to hell.”

She shared her hopes that the school board will seriously consider how they are going to help students, as opposed to simply releasing a statement. This action might look like “more support of LGBTQ pride weeks, […] emotionally supporting the students, [and] training the staff […] to be able to support students.”

Another community member in attendance was Lucia Marquez, Ventura Organizer at CAUSE. Marquez doesn’t “see how students at Ventura Unified could feel comfortable with a person at the top having those views about them.”

Hearing these concerns, the school board is planning on revisiting them in the future. An official statement has yet to be released.