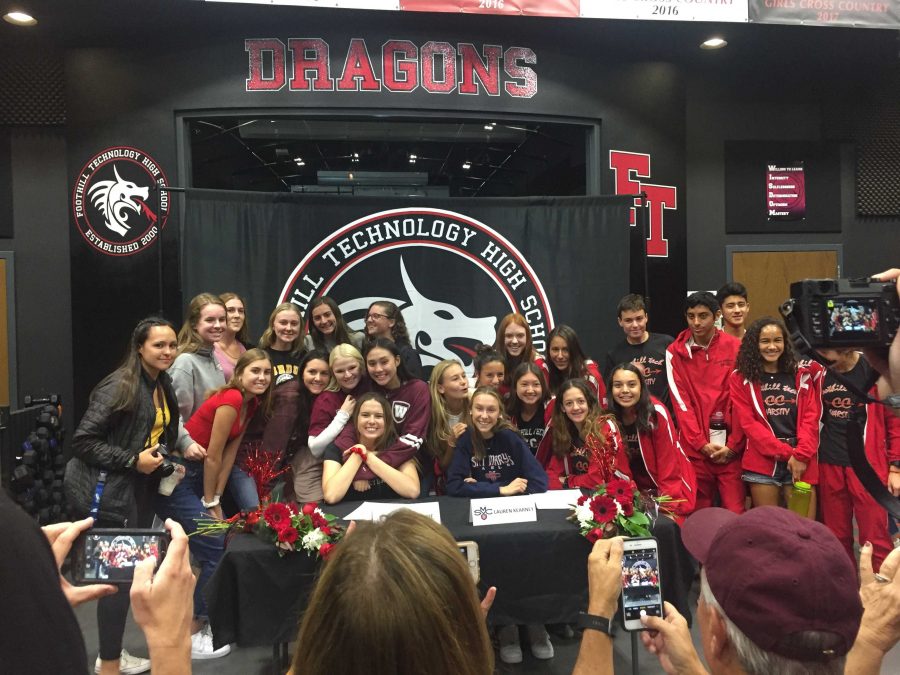 Malone (left) and Kearney (right) smile with their teammates in the Black Box. Credit: Nick Zoll / The Foothill Dragon Press

On Nov. 16, two four-year varsity Foothill athletes committed to taking the next step in their lives, both athletically and academically. Lauren Kearney ‘19 and Lexi Malone ‘19 officially signed their letters of intent to their respective colleges in front of a supportive group of friends, family members and teammates in the Black Box, the main training facility within the school.

Kearney, a varsity cross country and track-and-field runner throughout her entire high school career, signed her letter of intent to run for Saint Mary’s College beginning in the fall of 2019.

Meanwhile, Malone put the pen to the paper to express her intent to play volleyball for Westmont College.

According to athletic director Anthony Unchangco, Kearney and Malone “are prime examples of individuals who set the legacy” of the ever-expanding Foothill sports program.

“They weren’t here the very first year we had athletics, but they spent their whole four-year career competing and really showing what it means to be a Foothill Tech Dragon,” Unchangco said. “They excel in the classroom while competing athletically […] so it’s just very exciting.”

Kearney foresees her future at Saint Mary’s to be one of opportunity both inside and outside of the classroom.

“Academically, I’m going to study kinesiology at Saint Mary’s and hopefully after I want to study physical therapy or get my degree in physical therapy,” she explained. “Athletically, they have such a good group of [runners], and they’ve really moved up; they’ve moved up ten spots in the Western Region from last year and so I think top ten in the Western Region would be just amazing during my time there, so I think that would be a big goal.”

Malone, the varsity girls’ volleyball program record holder for career kills (742 over the span of four seasons), anticipates a college experience that will be a perfect fit for her.

“I am looking forward to Westmont and all that it has to offer me,” she said. “I chose a really small school because I wanted the hands-on experience and it was the only school that would let me play volleyball and be a pre-med student. I also chose it for its Christian values and I love volunteering and hope to study abroad, and I can do all [of] that at Westmont.”

Unchangco cited the “different personalities” of the two athletes to illustrate how Kearney and Malone would translate their success from high school to college.

“For Saint Mary’s, I know the campus pretty well, I know their athletic program. I think Lauren’s going to do great and […] I have no doubt she’ll thrive over there,” he said. “For Lexi, I think Westmont is a school that she’s a legacy at—her family went there and so it will be very exciting for their family to be able to see her in action over there. […] I think she’ll do great.”

When considering prospective colleges, Kearney “didn’t really actually think of St. Mary’s” as a possibility “for a while.”

“I knew Moses [Bojorquez ‘16] was going there and I talked to him a lot about it this summer. Then I was contacted by their coach in July and after that, I just really decided that their coaching and the school was just the best fit for me.”

Bojorquez was the recipient of Foothill’s first ever athletic scholarship in 2016.

Malone has already played her final volleyball game as a Dragon, which came in the first round of the CIF Division V playoffs. On Oct. 18, Foothill was swept by Viewpoint School, which eliminated the Dragons from 2018 playoff contention.

Kearney, meanwhile, is participating in her fourth straight CIF Finals on Nov. 17.

“Lauren, from her freshman year, came at it and was a strong presence with [her] time, and since then, her time has improved, absolutely,” Unchangco stated. “But her leadership is just huge and to have her be one of our first female leaders to be able to compete well, to be able to walk the walk and talk the talk, it’s just been great.”

“This past summer, seeing her with the cross country academy and working with the incoming freshman, it was just really great to see her in development. Lexi is a leader in her own right, sometimes a little bit quieter than most leaders, but definitely leading by example and so I think for that, both teams will be looking for that for someone to fill those roles next year.”