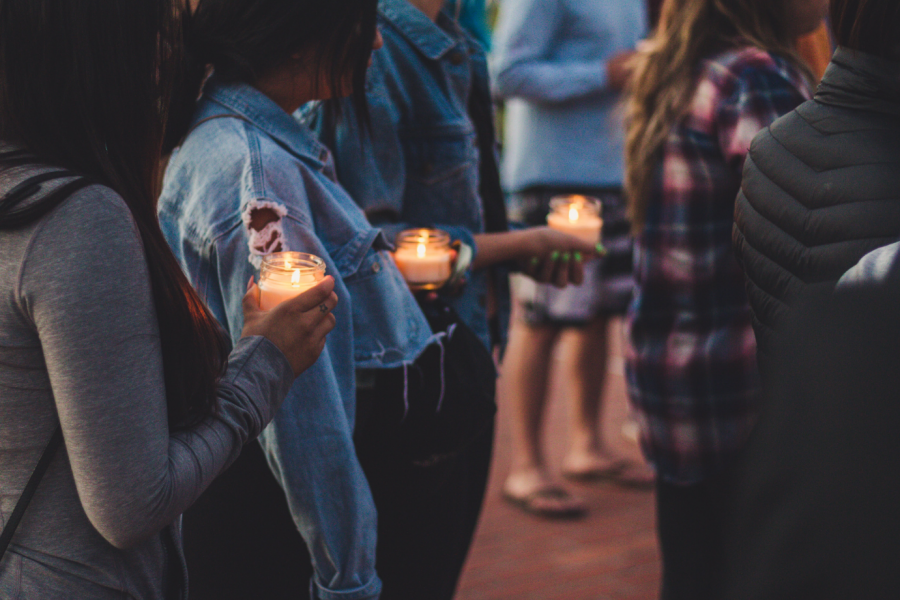 Venturans hold candles to mourn the loss of those murdered at the Borderline Bar & Grill in Thousand Oaks, Ca. Credit: Stefan Fahr / The Foothill Dragon Press

Following a tumultuous week of disasters both of nature and humanity, about 40 members of the Ventura County community congregated by candlelight to mourn the loss of 12 lives in the Borderline Bar shooting.

At the start of the vigil, Foothill student Hannah Yale ‘20 and Buena student Celeste Rodriguez ‘19, two of the organizers of the vigil, passed out candles to all of the attendees.

“It’s really about just honoring the people who died and taking a minute to think about them,” Yale said, describing her vision of the event.

“As soon as I found out the shooting had happened,” Yale said, “I have this group chat of my Students Against Gun Violence activist friends and I just texted it right away and said ‘we need to have a vigil.’”

Community members gathered around the flag flying at half mast and shared a moment of silence. For a few solemn minutes, the only noises were that of the cars speeding through the busy intersection, and sorrowful sniffles.

In Yale’s opinion, this shooting was particularly impactful within the community because of its proximity.

“It’s difficult when we see tragedies happening around the country and we have this gut feeling that it will make its way here, but we never really bring that to the surface of our mind,” she said.

Throughout the vigil, various community members shared their thoughts to the circle of supporters.

“We are all so busy and we don’t have time for each other for whatever reason, but thank you for taking the time to be here for somebody else,” Deanna Johnson said.

A couple others also emphasized the importance of voting to help push for preventative legislative measures.

Rodriguez then took to the circle and commemorated everyone lost, voicing their names and ages.

Atop attending support services like this vigil, Ventura Unified School District (Ventura Unified) students are taking to social media to express their sentiments for everyone affected by the shooting and the ever-growing California fires, and advocating for change at the national level.

Rodriguez believes that social media is “definitely” helping to revolutionize gun control advocacy, because many“people have been reaching out that way,” she observed.

“A lot of posts on social media have been heartfelt prayers to people who have lost their lives,” she said.

Lewis looks forward to seeing this increased youth participation and activism come to fruition, saying that she has “been waiting for this generation my entire life.”

Less than a year’s time has passed since Ventura was forced to cope with the consequences of the Thomas Fire. Amidst another tragedy, Ventura County decided to face the ramifications “together,” as Lewis puts it, which is embodied by the “unified” participation in this vigil.

“Vigils are normally to mourn, they are just a very sad thing,” she said. “But it gives me hope and motivation to keep working towards change so that we don’t have to light as many candles as we did tonight.”