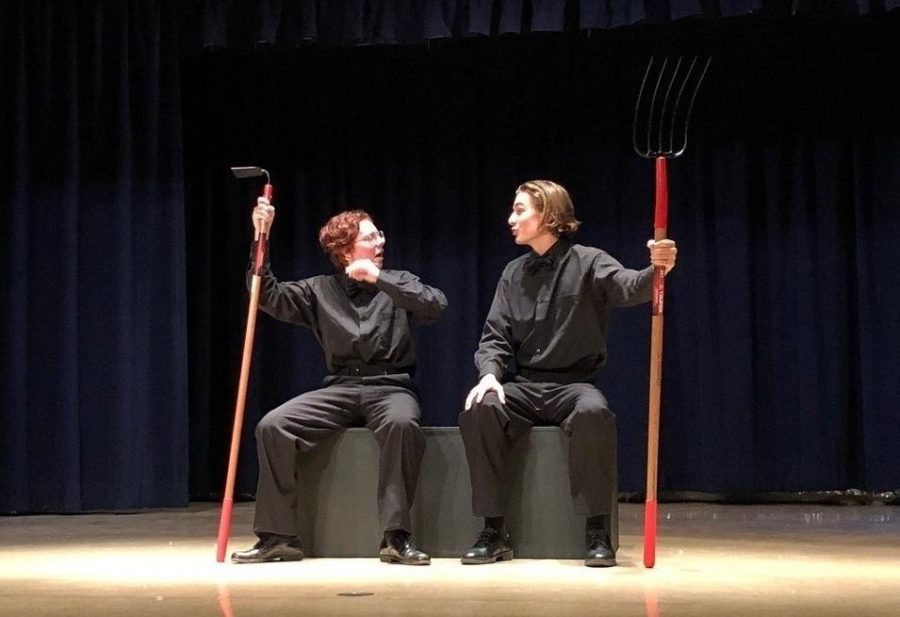 The warm glow of the lights in Junipero Serra Elementary School’s auditorium greeted the multitude of guests that were ready to immerse themselves in the sweet voices of the all-district show choir, which is a part of Ventura Unified School District (Ventura Unified).

With pamphlets in hand, seats filled and ears at the ready, the guests watched as the show choir’s Company and Crescendo members entered the auditorium swathed in black formal attire, exuding grace and confidence. Once the lights dimmed, the dinner concert commenced in beautiful, mesmerizing melodies.

The concert began with the Crescendo members–the part of the choir that consists of all middle schoolers–singing a rendition of “Consider Yourself” from the play “Oliver!”  Next on stage was the Company, all of who are high schoolers, who performed “Home” that originates from the play “The Wiz.” The concert continued with a variety of songs from various productions and artists including “Matilda,” “The Lion King,” “Dear Evan Hansen,” “Annie,” “ Fiddler on the Roof,” and “The Wizard of Oz.”

Throughout the performances, there were extremely powerful renditions that showcased the raw talent and the passion that these young performers have. This included “So Big/So Small” from “Dear Evan Hansen” that was sung by Foothill student Hannah Yale ‘20. An emotionally packed and heartbreakingly poignant song, it requires an invested performer that is able to sing fervently as well as embody an impassioned spirit and Yale did just that. In doing so, her performance shook the audience and left us with the sound of desolate longing ringing in our ears.

Another inspiring performance was from Foothill Student Jake Ayers ‘19 who performed “Mama, a Rainbow” by Jim Nabors. A song that was sang with the intent to show his love for his mother, Ayers sang with his heart and gave a powerful performance that consisted of singing directly to his mother in the front row. A personal performance indeed, but it also was one that many could relate to in the audience.

Along with these outstanding performances was a rendition of “Take Me Home, Country Roads” by John Denver that was performed by Ventura High School students Ren Tallent ‘19, Luke Pfeifer ‘19 and Foothill student Meghan Carter’s ‘20. These three sang along to guitar that was played by Pfeifer and created harmonies of true bliss and unity that haunted the audience throughout the rest of the production.

Some of the numbers were very lighthearted and amusing, including “Plant a Radish” from “The Fantasticks” which was performed by Pfeifer and Tallent. This number had the entire audience laughing at the onstage antics of the performers. However, despite the hilarity of this and other songs, the abundant talent of the performers was clearly displayed through their wonderful singing which was especially impressive while dancing.

Throughout the whole performance, it was clear that every single person on stage had worked hard and in every note of every song the passion, talent and hard work of the performers shown through.

As Foothill student Delaney Hong ‘20 put it, putting the performance together was “stressful and chaotic but it all came together.” Indeed, the production came together quite well in a nearly seamless display of amazing musical prowess.

Overall, the production was one of joy and glee. Never was there a song that was performed that didn’t contain passion or dedication. Every performer was on stage for a reason and never once did they step on stage without a gleam of excitement in their eye. Every person was surrounded by support when they were on stage, both from the audience and the other members of the choir. During the performances, the members of the choir would clap along and the audience would join, creating an environment of jubilation.

Foothill student Yoanna Soliman ‘19 commented on this by saying “the clapping today during the numbers—that wasn’t planned, that was just us supporting each other and it was just amazing.”

The production was memorable for all of its music and charm, but the most amazing thing about it was the camaraderie. I could truly tell that the choir was a family that supported each other. The choir proved what amazing things middle schoolers and high schoolers could do when given a stage, microphones and songs.

As Foothill student Ryan Aranda ‘19 perfectly said, “we all have our backgrounds but despite what makes us ourselves, we are able to bond and we’re a family and no one gets left out.”