Midterm opinion: Dems over the edge? 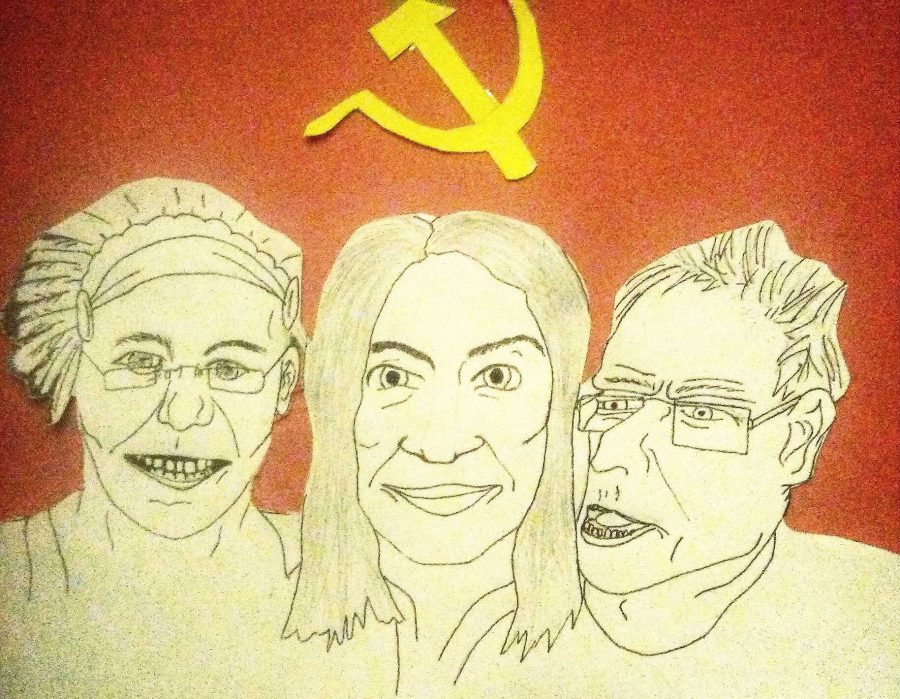 As the gales of election season come slashing, democratic-socialist politics face a major test. Once thought to be dead in America, the movement received promising signs of life with the campaign of Bernie Sanders in the 2016 Democratic Primary. Political organizations like the Democratic Socialists of America (DSA), Justice Democrats, and Our Revolution now persistently vet and endorse candidates running for office under the common goal of swinging the pendulum of power towards the working class. Even former President Barack Obama recently came out in support of single-payer health care and self-described Democratic Socialist Alexandria Ocasio Cortez’s candidacy for New York’s 14th district. The question now dividing the Democratic party is whether or not it has drifted too “far left.”

According to conventional party wisdom, it has.

Since moderate voters are key in gaining the majority vote, it follows that candidates need to run on a moderate platform to win. The failed campaigns of Michael Dukakis and George McGovern serve as cautionary tales for what happens when Democrats neglect the “reasonable center.” It was Bill Clinton who, through “triangulation,” the co-opting of the Republican opposition’s economic and criminal justice policies, was able to get elected twice. Yet, as we know, the last Clintonian attempt at triangulation wasn’t enough to get voters to “Pokemon Go” to the polls.

So, what do I think? I don’t believe that Democrats are off the edge at all, and the idea that they are is largely born out of semantic confusion amidst socialism’s resurgence as a political label. This may come as a shock, but there aren’t any elected socialists in the Democratic party, and among congressional hopefuls, they are few and far between. There are, however, Democrats who support using government to meet the demands of working families, evidenced by promises of paid family leave, universal health care and publicly subsidized college tuition.

The fact that politicians such as Bernie Sanders erroneously fancy themselves “democratic socialists” without ever calling to abolish capitalism is the root of this confusion. Socialism is not when the government does stuff. If that was the case, then the United States might as well be the most socialist country on earth, given its impressive military budget. This new movement on the left is instead one for Social Democracy, an ideology that accepts capitalism and believes in a strong social safety net.

The term “democratic socialism” itself is a tautology. Socialism is by definition an extension of democracy from the political to the economic realm. It stipulates that there be worker control over the means of production and an abolishment of profits, plain and simple. Pursuing such an end is, in my view, fantasy at best and disastrous at worst.

Still, many socialists will adopt a pragmatic approach, cheering an expansion of the state and greater regulation of the private sector. Where social democrats may see this as an end, however, socialists see it as means to eliminate profit and usher in the eventual dissolution of the state into a borderless society built on shared ownership, which would render the United States vulnerable militarily and isolated from the rest of the global capitalist economy.

That’s why Democrats, without adjusting their current path towards social democracy and away from neoliberalism, need to abandon the socialist label—not only because it’s a bad look, but because it’s a misnomer. One can point to millennials’ apparent distaste of capitalism and love of socialism in response, but one can also expect that to be the case when young people start associating “socialism” less with what it really is and more with simply not having to pay off their student loan debt.

The economic policies proffered by groups like the DSA et. al.—public funding of health insurance (“Medicare for All”), raising the minimum wage, a minimum requirement of worker representatives on a company’s board of directors and state negotiation of prescription drug prices—poll well among voters. Certainly, there is a case to be made for progressive measures that already exist in many other developed capitalist economies, which are ones that leave the U.S. lagging behind in healthcare and education.

The opposition to a successful progressive agenda lies more with moderate Dems than conservatives, the centrists who historically, tend to serve as useful idiots for fascists. Ever since Hillary Clinton declared that “single-payer will never, ever happen,” centrists and their media continue to move the goalposts in regards to the progressive movement. First, it was said that progressives couldn’t win. Now, the new talking point is that they don’t win all of the time. Centrist outlets like Politico are quick to write what Fair Media Watch calls “premature obituaries” to the movement whenever a candidate falls short in a special election, completely ignoring the massive resource disadvantage that the principled refusal of many progressives to corporate PAC money presents.

I don’t see any danger in Democrats embracing new ideas, seeing that Trump and the GOP will accuse them of being Marxists no matter what. The illusory idea that Republicans are reasonable—maybe the one thing more phantom than the “reasonable center”—continues to plague gullible moderate and right-wing Democrats. Joe Manchin, on top of floating the possibility of Trump support in 2020 and voting to fund the border wall, was the only Democrat to vote for Brett Kavanaugh’s Supreme Court confirmation.

Nevertheless, Trump’s routine of bashing “sloppy Joe” Manchin for voting “against everything” shows no signs of letting up. Democrats needn’t be afraid to market their left-wing turn to voters in red states, as Beto O’Rourke is doing in Texas. Unlike the politicians they elect, Republican voters are less obstinate in their stance against plans like Medicare For All, a policy which a plurality of them now support. Win or lose initially, it’s up to Democrats to shake up the political landscape.

My only reservation lies in some social and civil issues that red voters aren’t as keen on and shouldn’t be the main focus of progressive campaigns in “Trump Country.” Doubling down on Democratic party-line positions on gun control and abortion are great at turning off what would be our otherwise open-minded Republican countrymen.

The GOP’s radicalism is also why Social Democrats can’t discount groups like the DSA outright, as inviting socialists to the conversation levies an effective left counterbalance. When the GOP remains the most powerful major political party on Earth to deny man-made climate change, it sets itself at odds to a resolution that the public increasingly comes to accept with the passage of each election cycle. In turn, perhaps elected Dems will take advantage of this opportunity and devise more ambitious solutions to climate change than a pitiful carbon tax and other “market incentives.” Socialists’ aggressive preference for nationalizing America’s energy will swing the Democratic conversation towards much-needed action that as of now, is not being seriously addressed.

Far from being a mob, most students at both the high school and collegiate level are frustratingly apolitical. For evidence of this apathy, look no further than at the number of comments on these articles. Normalizing the local events-centered, door-to-door campaign style of the progressive movement into the Democratic party will do more to engage young people in politics, and most importantly, win.