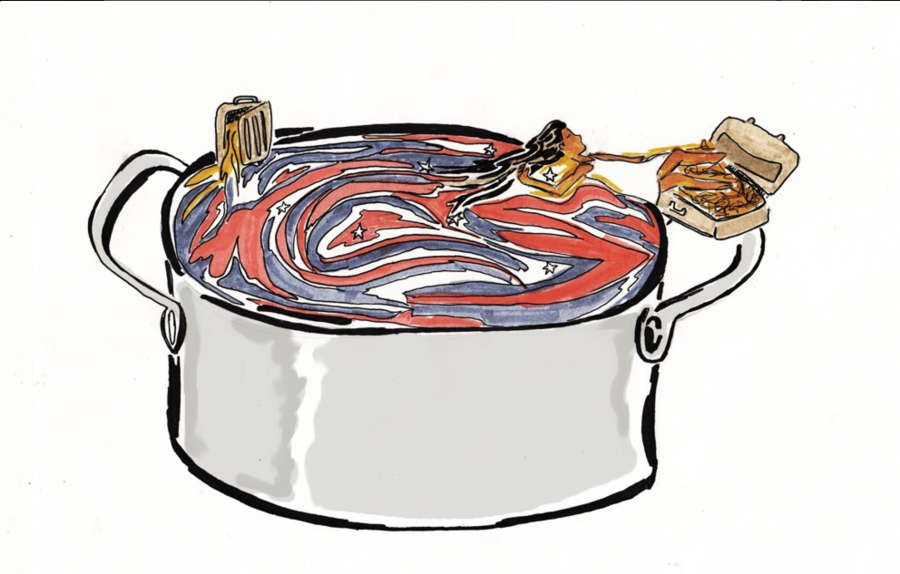 Dan Fitz-Patrick is the first history teacher who has ever dared me to question America’s melting pot metaphor. During his lesson on the Gilded Age and immigration, Fitz-Patrick asked our class to decide if America is a melting pot of cultures, or a salad, a tossing together of cultures. He also asked us if maybe the cultural diversity of America is too complicated to be summarized in a metaphor.

When it comes to history, the correct answer is almost always “it’s complicated.” These food metaphors are way too simple; they make American diversity sound like a peaceful blending of cultures.  The phrase “melting pot” makes me think of caramel, and I know the history of diversity in America is not so sweet.

America likes to glorify the struggles of past immigrants by promoting the idea that they were sort of saved by the American dream. That’s why the melting pot metaphor is so popular; it makes diversity this country’s prideful asset.

I think that America only values ethnic and cultural diversity if it benefits those in power and those with privilege, which are, for the most part, white Americans. I think that the diversity in America is oversimplified; I believe that diversity in America is given a romanticized definition of it being the result of foreigners seeking freedom and opportunity. Not that the previous statement is untrue, but diversity as the result of white imperialism is an aspect of American diversity that is often ignored. The way this diversity is dealt with today is overlooked as well.

With immigration came diversity, and with diversity came ghettos. These ethnic enclaves are the result of systemic racism— racism that manifests itself into multitudes of issues, like disparities in economic mobility, education, and opportunity between races. At the same time, these ethnic enclaves preserve the culture and community among immigrants, and they have long served as homes for people of color.

But for white people, ethnic neighborhoods are tourist attractions at best and crime-ridden and poverty-stricken (“ghetto”) at worst. The things these ethnic enclaves provide are only valued if it is useful and not harmful to white people. It seems as though white people care about the (‘cool’ and ‘trendy’) culture of these neighborhoods more than they care about the social issues damaging the neighborhoods’ communities. For example, look at Little Tokyo, one of the most popular ethnic neighborhoods in Los Angeles. People love Little Tokyo; it’s got ramen that’s not just from the package, stores filled with Pocky and Ramune, cutesy stationary and Studio Ghibli toys. Yay, Japan!

Little Tokyo neighbors Downtown Los Angeles and the Arts District, two areas in Los Angeles that are becoming increasingly popular to live in (i.e., studio apartments there are now averaging $2,000/month). Interest in Little Tokyo is rising as well, now that it’s deemed as less of a ghetto and more of a cultural experience. White people are beginning to move into the neighborhood and demand for housing in Little Tokyo is increasing. Rents are skyrocketing, and Japanese-Americans are being pushed out. Japanese culture is accessorized as a cute and quirky accessory for white business and living. White people are bringing new developments, new shops and new cafes, and the small, Japanese-owned restaurants and markets that essentially were the pillars of Little Tokyo since its very beginning are being forced out of business. This is called gentrification, a profit-driven means of dismissing and displacing current occupants to pave the way for the wealthier class. It’s subtle colonization and it’s happening everywhere, from Los Angeles’ Little Tokyo and Lincoln Heights to Harlem, New York. This is what I mean when I say America doesn’t care about diversity unless it’s profitable. America doesn’t care about the people of color, America cares about commercializing the cultures these people brought with them and fought to preserve over centuries of forceful assimilation.

What made me angry enough to write this was the Dole Pineapple commercial I watched while waiting in line to buy ice cream at Disneyland. The ad mainly emphasized how great Dole Pineapple tastes as it showed a Hawaiian woman serving pineapple at a luau. The narrator also went on to talk about James Dole and how he “revitalized” the Hawaiian economy with his pineapple plantations. I didn’t really understand why I was mad at first, but while I was sitting in the Tiki Room, eating my Dole Whip and listening to the crowd sing along with the robot birds, “in the tiki tiki tiki tiki tiki room” over and over and over again, I had my realization.

I was mad, I am mad because that commercial was lying to me. Dole wasn’t a hero and he wasn’t saving the Hawaiians. The United States stole the islands from the Hawaiian Kingdom because businessmen and sugar planters saw great economic potential there. James Dole’s cousin, Sanford B. Dole, was one of the drafters of the new constitution that the Hawaiian king was violently forced to sign. This constitution essentially diminished the power of the Hawaiian monarchy and the rights of indigenous Hawaiians. America overthrew and colonized the Hawaiian kingdom, capitalized on the stolen land and used the Hawaiian people for plantation labor. Now America flaunts its Hawaiian Islands. America commercialized Hawaiian culture so much that it seems “Hawaiian” is regarded more of a party theme than culture and ethnicity.

The American government didn’t care about the Hawaiians when it robbed them of their homes and destroyed sacred lands, and today the American government still injures the Hawaiian community by exploiting their culture and benefiting off of it through tourism. And gentrification isn’t just a mainland thing; it afflicts Hawaii as well. Housing prices on the islands are increasing as more and more of the wealthy are moving to this “exotic escape.” The U.S. government did issue a formal apology to the native Hawaiians a few decades ago, yet it means nothing when Hawaiian culture is still being misused for white profit.

It seems that diversity is just an accessory to white people; It exoticizes their aesthetic. Diversity is a beautiful thing for white America because it is profitable. But diversity takes on a whole new meaning for people of color. It is beautiful because if you are a person of color in America, diversity becomes a necessity. Considering America’s racist and brutal foundations, with the country being borne through centuries of genocide, slavery, and theft, people of color need this cultural diversity to bring a sense of belonging. If you’re a person of color in America, it’s common to feel like you don’t really belong anywhere, to feel caught somewhere in between America and your ancestor’s country. So, this melting pot caesar salad fettuccine alfredo nonsense— it doesn’t accurately describe American diversity. Cultures weren’t mixed together or melted like a tasty dinner. Many were stolen and exploited and many still are today. If I were to eat whatever meal the metaphor for American diversity is, I’d probably get E. coli.