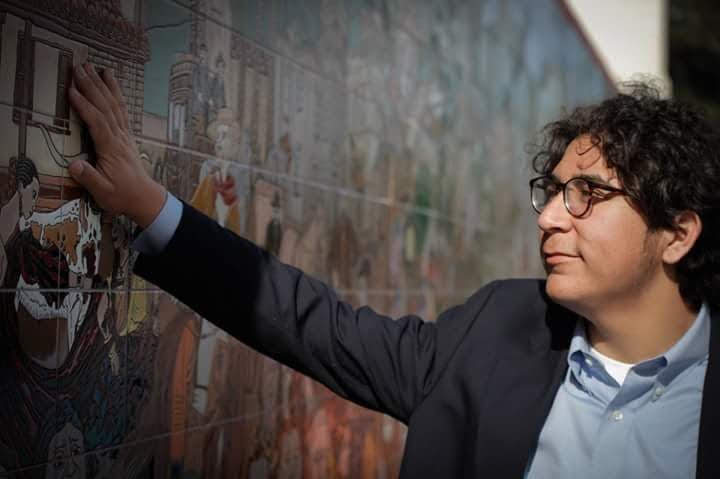 ALEC GASCA: I’ve born and raised here. I went to our elementary schools. I went to Foothill—not Foothill—I went to Juanamaria, eventually Balboa, and then I did graduate from Buena, but I did have a lot of friends at Foothill, so, we’re—you know, we’re all friends. Yeah, I’ve been here 21 years. I volunteer with Catholic Charities, which is a charity downtown and throughout the whole city that what they do is they feed the homeless once a month and they also—they provide legal advice. They provide different canned food drives and different things throughout the year. I’m also the vice president of one of our local charities, Knights of Columbus, which—what we do is we provide knowledge and the resources for people to better themselves throughout the city, and we’re actually a multinational charity. But just within the city, I volunteer with different charities. I work here; I work in a local business—I work in a pharmacy. I’m a pharmacy clerk and uh, yeah. Hopefully, I want to do more in the city. I want to—I’m actually in the middle of finishing my degree to come back and teach here either at Foothill or Buena, so yeah.

GASCA: One of the most important measures for me is the measure that deals with rent regulations. Forcing, which will allow the city to enforce a cap on how much you can rent a place for, which means it will make it more affordable for people who can’t afford housing. And, it’s important because we have a lot of our students throughout, whether, you know, through high school, middle school, elementary school—quite a few of them are actually low income and if we offer their families—if we can provide them with a place to live then the idea is then the students will learn better because they have—they won’t have to worry about “where am I going to sleep tonight?” They will then be able to go home, study at the dinner table and whatnot and it will also provide the city with more authority to regulate its own rents because currently, I think that a lot of the power lies with the state, and I would like to see some of that come back to the city and its people.

INTERVIEWER: Two state propositions that would likely prove to be significantly impactful if passed in the election are Prop. 2 and Prop. 12. Do you support either, both, or neither of these measures? Why?

[Gasca pulls out his phone to check his notes, interviewer restates the question]

I definitely—I support both. I support Prop. 2 because I think having been involved with a lot of the homeless community and having taking part in helping them, speaking to them and just hearing what their concerns are and seeing the state of a lot of them I think that deal—helping them with mental health is a huge, is a huge thing that we—it’s really important for our community and our city to take part in that and I don’t think it should be up to future court decisions. I think it should be—it should just be. We should help them. We should be there. If they need help, we should be there to provide the help for them, if we can. And as far as Proposition 12 goes, it’s interesting to hear about Prop. 12, because Prop. 12, of course, deals with food, you know, pork and pork parts and how pork is raised. I would support Prop. 12 as well because of the fact that in today’s world we care a lot about how or where our meat is stored, how it’s stored, even how it’s prepared sometimes, what it’s prepared with, where its [raised], how it’s raised. I think if we pass Prop. 12, it will allow our students, just our people, in general, to feel more comfortable with what they are eating.

GASCA: One of the biggest ways I plan to do that is by introducing a lot of more events onto the East End. Like, we have—I don’t know if you guys are aware of it, but there was the Art Walk this weekend that was held downtown, and like for those who were 21 and older, there is the Winter Wine Walk. There is different things that happen downtown and what I would like to do is I would like to bring some of those events to the East End and to incorporate specifically our students. For example, Poinsettia has a really thriving arts community like they have their students for—I don’t know what it is about Poinsettia, but their students are like stellar at art, and I think we could introduce them to different aspects of the art. We could have a portion of the Art Walk that is just student-based, and it’s totally similar to what’s at—what they have at the fair—how they have the student walls. I would like to see that come to the Art Walk. I would just like to introduce that on a greater scale to the East End, and as far as bringing them into the government, I hope that even just in this election by me running as a 21-year-old who went to school with people that you’re currently going to school with—I hope that that will encourage young people to get more involved. A friend of mine who just turned 20 actually just texted me and asked me “how do I register to vote because I want to get involved.” And that’s—that’s what I hope to bring out of this. And then in the future as I progress I hope to encourage other people: “Look, people our age are getting involved with community. They are getting involved with government, I can do it as well,” so.

GASCA: That’s a hard question. The biggest—I think the most pressing issue is the problem—the conflict that lies within homelessness. I think that’s one of the biggest—it’s a hard question to answer, but I think that’s one of the biggest problems. It’s just what happened recently with what happened downtown at the Promenade with the killing. Now, there is such a polarized view of homelessness. You are either staunchly in support of them, or you’re on the other end of the spectrum where we just want to run them out of town and I think we have to define—we have to define homelessness in different ways. Homelessness is not just everybody that’s on the street; we have to define them as if they’re, you know, as if they’re breaking the law; if they are just victim of circumstance after the Thomas Fire; if there’s mental health problems that’s made them homeless; if they’ve got a poor living situation at home and that’s in fact why they’re homeless; or there are some who choose to be homeless. We have to classify these things, and we have to—I don’t know the answer to deal with it yet, but we have to figure out, we have to, together—that’s my biggest thing is together—we have to figure it out. I’m not—I don’t want to tell anybody that I know how to solve the problem of homelessness because I don’t, but as a community we can solve it and we have to.

GASCA: The values that I embody that I think Ventura speaks most loudly to are values of just kindness for one, because we’re especially—when I was in high school we had a—I am trying to relate this, to you know, you guys are in high school, and what not—we had a uh—we had “Dude. Be Nice” actually come and visit our school, and that message of just being kind to people is something that our city has always kind of pressed on me—to just be kind, whoever it is, whatever it is, just be nice, and I think that’s a huge aspect of our community, and that’s one aspect that I like to embody. Beyond that, there is a sense of leadership that has come from our city, just as a whole. We, for example, we’re—we just shifted towards district elections, and in my District 4 race alone there is five of us candidates. That shows that there is five people, in just in our area that want to take part—that want to lead our city. And that’s a big part of what our city stands for. We—I mean, it’s not—I don’t want to sound arrogant, but it’s not [called] ‘Oxnard County’ or ‘Santa Paula County’ or ‘Ojai County,’ it’s Ventura County. We lead, that’s what we do, and actually, my uh, my family has actually been here since we founded the city as leaders of the city, so we—I just—that’s a big part of what my family and what our city has pressed on me, and that’s what I want to bring to the city.