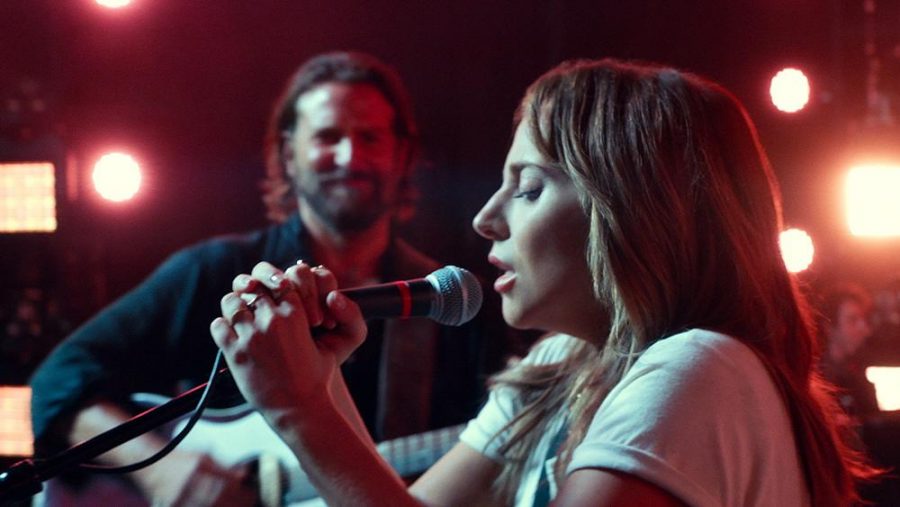 Love is messy. Wounds run deep. “A Star is Born” shows us what it takes to stay human in the midst of a world that boxes people up in order to conform them to the social norm. This film is an emotional knockout that leaves the audience with their eyes watery and their jaws dropped. Of all four productions of this melodrama, this one has this magnetic pull; it is a romance deepened by the brutal mirror of showbiz.

“A Star is Born” takes us on the journey of two lovers on very diverse paths: a man tumbling to the bottom and a woman rising to the top. Ally Campana (Lady Gaga) belts a jaw-dropping cover of “La Vie En Rose” in the drag bar she used to work at, but the lack of support from her egotistical father has her giving up on her dream. As she struts down the bar, her eyes meet alternative country star Jackson Maine’s (Bradley Cooper) eyes as he stumbles in for more booze. Sparks are flying off the walls as they immediately fall for each other.

As their relationship progresses, she becomes Jack’s safe haven, taking on more roles in his life than she signed up for. Jack sees her incredible and shadowed talent so he invites her onstage to sing a song alongside him. Ally’s natural comfortability on the stage sparks the turn of her fantasy into a surreal dream come true. This hesitant, struggling singer takes off to become a sensational star, but as Jack is swimming in a pool of booze, Ally’s light is clouded by her partner’s tailspin.

“A Star is Born” was originally created as a romantic drama in 1937, formulated around the love story between a struggling actress (Janet Gaynor) and an established actor (Fredric March), whose obstacles of alcoholism are affecting their relationship. Recreated in 1954, the concept remains the same, setting aside the cinematic sensibilities. In 1976, the movie was recreated yet again, but this time it was set in the world of the music industry, starring Barbra Streisand and Kris Kristofferson in the lead roles. Every production shows that this tragic romance is a timeless story, and will never stop touching the hearts of many.

The characters’ love for each other is electric, tender and genuine. However, the film does contain some brief graphic scenes.

The film reveals the reality of the music business and uses this backdrop for their moving love story, but the natural chemistry between Gaga and Cooper is what allows for such emotional investment into their journey. Gaga’s strong personality contradicts her character’s guarded and quiet identity, showing the audience that she has a natural talent for the movie industry. Her marvelous performance is Oscar-worthy.

Cooper did an exceptional job of playing such a complex character and made us feel like we truly knew him. Not only did Cooper execute an incredible performance, but his directing skills are through the roof! This film expressed a lot of promise from Cooper, as this is his directorial debut. Cooper does an amazing job as he displays the fear of becoming a star. His work expresses this idea of vulnerability; people can be so powerful yet so fragile.

What is equally as powerful as the acting and directing is the film’s musical score. The film opens and ends with powerful, emotional songs. The first song is of Jackson Maine playing in a stadium, setting the tone for the next few scenes and showing us a glimpse of Maine’s life. The film’s ending was perfectly executed with a song by Ally that presents rawness and transparency, leaving the audience with an ugly cry and rampant emotion rampant. Throughout the film, the lyrics are spot on and their voices bring a genuine tone to the movie, with their authentic sound and radiant chemistry.

I was extremely impressed with all aspects of this film; the plot was gorgeously heartbreaking, the acting was phenomenal and the music was tear-jerking. This film was like a plane that took off and never met the ground again.

“A Star is Born” didn’t fail to impress with a 8.4 on IMDb and a 91 percent on Rotten Tomatoes—across the board excellence. This film hit $43 million just in their opening weekend, exceeding their predicted gross of $35 million.

This movie was polished to perfection. The music was raw, the writing was exceptional, the acting was astounding and the love was unforgettable. By the end of this film, you will want to be seeing Gaga at the Oscars as much as you want to see Ally at the Grammys. Be sure to bring tissues, because this movie is an emotional rollercoaster.