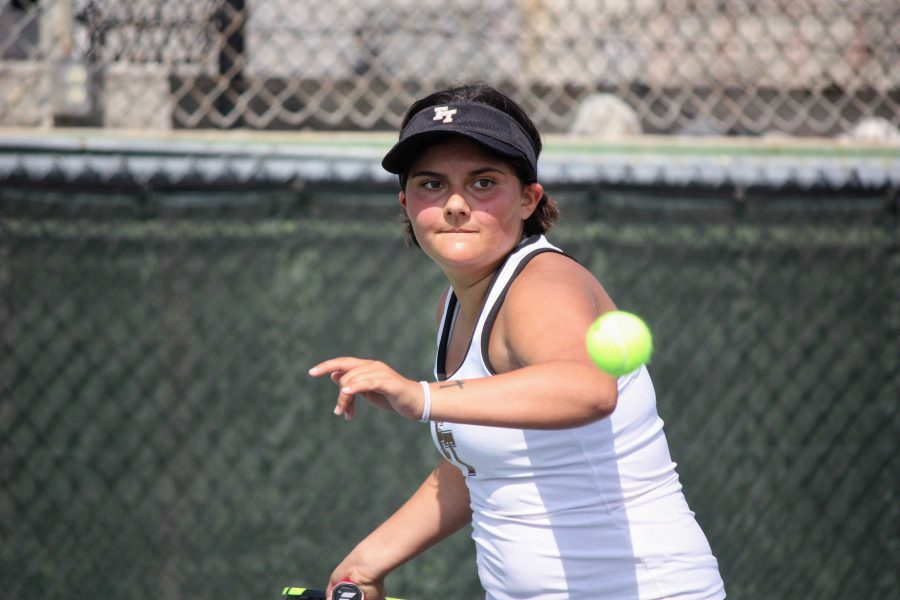 Tennis: the game of finesse, grace and etiquette. The sport began in Northern France in the 12th century and the traditions have been preserved through thousands of years.

To look at some of the world’s most famous tennis players, they are tall, strong and visually intimidating. Foothill’s own Erin Gaynor ’19 owns the fact that she does not quite fit that image.

She shows her ambition with her serve, bringing power and speed with a kick serve.

The tennis serve has five major components: the windup, the toss, the strike, the acceptance window and the spin. Gaynor has mastered all five.

In the windup, she presses her feet against the court and uses the ground to build up potential energy. In a concept called “the kinetic chain principle,” the energy formed in the windup travels through the body’s joints and into the ball in the strike.

Simultaneously, she throws the ball high in the air and one to two feet inside the baseline. This allows contact to be made at 1.5 times body height. For Gaynor, that’s roughly 7 feet 9 inches.

On the strike, the ball is only in contact with the strings of the racket for 5 milliseconds and moves up the string plane about 5 inches, to gather topspin. With the racket at approximately 10 degrees, the racket strings return the energy it receives on impact and gives the ball even more pop as it goes down the court. The strings have 60 pounds of tension on average and stretch about one inch on impact.

As the ball rotates forward, it creates an area of low pressure underneath it that allows the ball to float across the court. Amazingly, the spin actually increases on the bounce. As the bottom of the ball creates friction, the top of the ball continues to spin, which makes the ball spin faster and throw off the opponent even more.

After the bounce, however, the ball slows by roughly 50 percent. Lucky for the opponent, this makes the ball easier to track and return.

Gaynor sets aside what people may think about her height and blows people away with a powerful serve and attacking mindset.