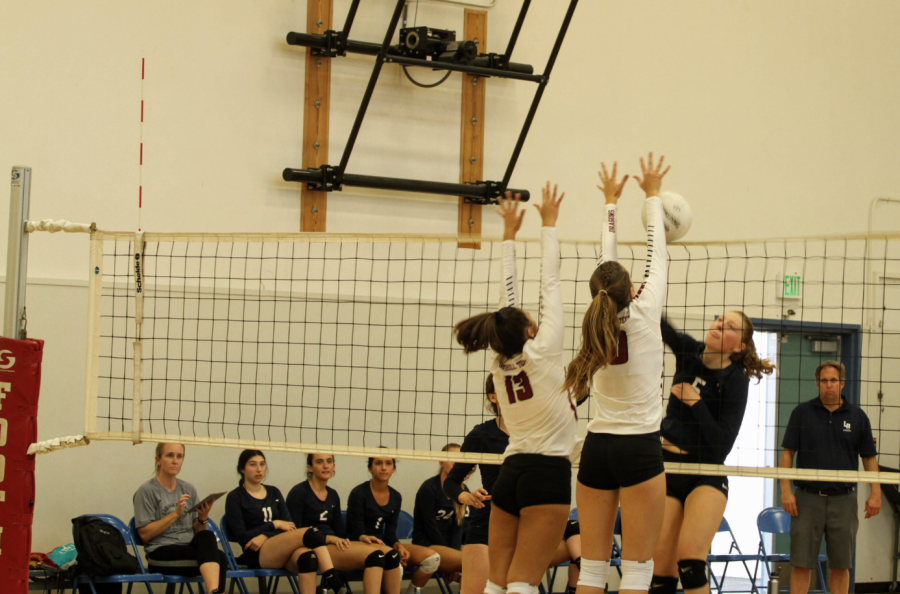 For the Owls of Laguna Blanca High School, 2018 marks the first season of competition in the Tri-Valley League. They have received a rather rude awakening upon entering the league; Laguna Blanca had dropped their first two conference games ahead of their dual with the Dragons.

On Sept. 20, the Owls sought their first league win against the Foothill varsity girls’ volleyball team. The Dragons denied them as they eventually coasted to a 3-0 win after a back-and-forth battle in the Cabrillo Middle School gymnasium.

Head coach Kris Gullatt stated that he “saw a lot more execution of things that we’ve worked on instead of just kind of scrambled behavior,” causing him to be “really proud” of the victory.

While the end result didn’t reflect it, the Owls were competitive for much of the game. Foothill and Laguna Blanca traded leads throughout the entirety of the first set. Leading the charge was Averi Carter ‘21 and Morgan Stevenson ‘19 , who each recorded kills that either tied the set or gave Foothill the lead.

At one point, the Dragons had their backs against the wall, trailing the Owls 26-25 with Laguna Blanca having a chance to take the set. It was the Dragons, however, who would win the set with a score of 28-26 by sparking a quick 3-0 run.

In the second set, it was the Owls who jumped out to an early lead despite a few kills from Lexi Malone ‘19 that kept Foothill within striking distance. With an 18-15 lead, it was Laguna Blanca’s opportunity to tie the game score at one apiece.

The opportunity, however, was relinquished. From that point on, the Dragons went on a blistering 10-2 scoring run to take the second set by five points, 25-20.

The third set spelled the end of the game for the Owls. Foothill made sure that the opposing team did not claw their way back into the contest. The Dragons’ largest lead in the set, as well as the game, was a ten-point advantage. The exceptional setting of Karina Ariniello ‘20, paired with the powerful trio of Malone, Carter and Haley Higgins ‘19, secured a 25-17 set win and Foothill ended up sweeping Tri-Valley League newcomers Laguna Blanca in three sets.

It was a big week for the Dragons’ girls volleyball team. Not only did they win their game against league opponents Laguna Blanca, Foothill also recorded a pivotal league win against St. Bonaventure in the Seraphs’ home gymnasium.

Gullatt believes that the two league wins in one week “gives the team purpose” following a rough start to the season.

“Coming off of last season when we accomplished so much and [making the] playoffs, it’s hard to come into the next year, especially since we started the season having lost more matches than we won in the first three weeks,” he explained. “We are in a really, really good spot to take the league title […] so this is the program’s first real opportunity to be league champs in Tri-Valley so it kind of repurposes things. I think it gives our seniors something to be motivated for.”

Gullatt also called a 4-0 league record a “nice reward,” especially being that some of those games were extremely down-to-the-wire.

“I think a lot of the matches, or at least two of the matches that we won against La Reina and Grace Brethren, could’ve gone a different way, and we could be 2-2 right now,” he said. “But we found a way to be 4-0 so that bodes well for them. They’ve pulled out a lot of matches late and so I think we still have a lot of things to work on.”

Foothill’s next obstacle will be a road game against Grace Brethren High School on Sept. 25. Anticipating the crucial league matchup, Malone looks forward to “just getting better” and “working really hard” in order to keep the team in contention for a league title in the coming weeks.