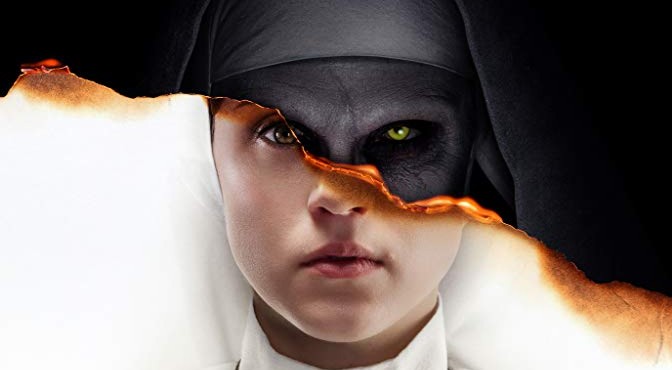 I am not one of these people. I’ve never liked horror films because I don’t want to be haunted by an idea that I voluntarily subject myself to.

Believe me when I say that I’ve tried to watch one at my home but the narrative always goes the same way: my nerves get to me and I automatically turn the movie off.

I tried “The Silence of the Lambs” but once I saw Hannibal Lecter in his cell creepily speaking with Clarice, I decided I knew the general gist of the movie and I left the room. I tried “It” but once I saw Pennywise in the sewage drain, I decided I didn’t want to be scared to drains every day, so I changed the channel.

This scenario has happened to me more than I’d like to admit, but I decided that I needed to watch one fully to make a final decision on the matter. Therefore, I decided to buy myself a ticket and enter a showing of “The Nun.”

Once you see her, you will never forget her. #TheNun is now playing everywhere. Get tickets: https://t.co/dgXPucaC6l pic.twitter.com/LVIcL17OIq

“The Nun,” which is a part of the “Conjuring” universe, follows the story of a priest, Father Burke, and a novitiate nun, Sister Irene, while they investigate the suicide of a nun at a convent in Romania. When they arrive at the bloodstained front staircase of the convent, they are suspicious of what awaits inside but are hoping for a quick and easy investigation. Little do they know that there is an evil presence lurking in the alcoves in the form of a malicious nun and a dark secret that the convent doesn’t want anyone to uncover. With the help of a local from a nearby town, Father Burke and Sister Irene attempt to unveil the secret and try to right this terrible wrong.

This movie was not what I expected.

For a movie that had its advertisements banned on YouTube for being too frightening, I was surprised that I was not horrified nor haunted by this “terrifying” nun both during and after the movie. She lacked a scare factor that is greatly needed for a main antagonist.

This may simply come down to the fact that I have no reason to be scared of a nun because I’ve never had an interaction with one. Or it comes down to the fact that the director limited the character’s scare tactics, only allowing her to instill fear through surprise attacks and choking scenes.

The movie had a spectacularly ominous and threatening set which could have terrified the mass majority of us it if it was used correctly—unfortunately, it wasn’t. “The Nun” simply wasn’t as psychologically haunting as I expected it to be. It mainly relied on jump scares to invoke a sliver of fear; even those were easy to predict.

Not only did the move lack true horror, but it also lacked sense. While watching, I was asking why everything was occurring and I never received a substantial answer. Instead, there was only unnecessary drama that failed at building any suspense.

My sentiments are shared by many as “The Nun” only received a 27 percent on Rotten Tomatoes and a 5.9 at IMDb. However, it did pull in a large amount of viewers and exceeded its predicted profit of $40 to $45 million by raking in $53.5 million in its opening weekend.

Even though the movie itself was a flop, the characters were enjoyable. The actors included Taissa Farmiga, a veteran in horror as she has been an actress in various seasons of “American Horror Story,” as Sister Irene; Demián Bichir, known for his role in “The Hateful Eight,” as Father Burke; Jonas Bloquet as Frenchie; and Bonnie Aarons, a well known actress in the “Conjuring” universe as she was Valak in “The Conjuring 2,” as the Nun.

If this is what an average horror movie is like, I must say that I don’t want to see another. Not because I was tormented after viewing this film or because it caused me to sleep with my light on, but because of the lack thereof. No fear was instilled in me from this movie—rather a sense of worthlessness from an indifferent plot.

If you want a 96-minute film that is full of jump scares but lacks the ability to scare even the most novice horror film viewer, this movie may be to your liking.

If you are looking for terror, though, I highly recommend looking elsewhere.