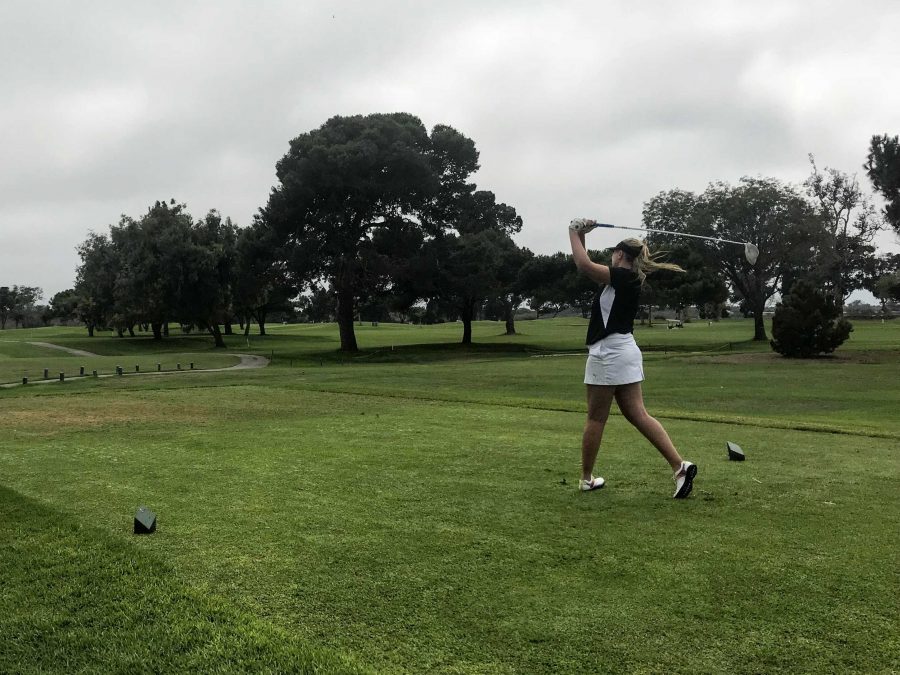 First swing for Paris White ‘19 on the first hole of the match. Credit: Katie Denger / The Foothill Dragon Press

The Foothill Technology High School’s girls’ golf team swept away the Fillmore Flashes during a cold and windy match on Sept. 6.

They won the match, but head coach Janey Dunn stated that although the team “came out and played well,” “nobody had their best game.”

In regards to their success thus far during the season, White said her team has “worked so hard for this,” and added that she thinks “everyone just wants to improve.”

Singleton believed the team’s technical strengths in this match were their “drives and iron game.”

White also realized the team didn’t play their best, but she thought that they “tried really hard” despite the circumstances of the weather.

“A lot of wind is not good for golf—the balls kind of go everywhere,” she said.

Dunn agreed by saying that “the conditions weren’t fabulous” and that “playing with players that have a lower skill level than yours is sometimes difficult.”

Singleton mentioned that the Flashes “weren’t our biggest competition but it was a match and we all did our best.”

The Dragons will be facing off against the Flashes again on Sept. 13 in Fillmore. They are a step closer to their goal of going undefeated in league play again and coming in the top 10 of the California Interscholastic Federation (CIF) playoffs.