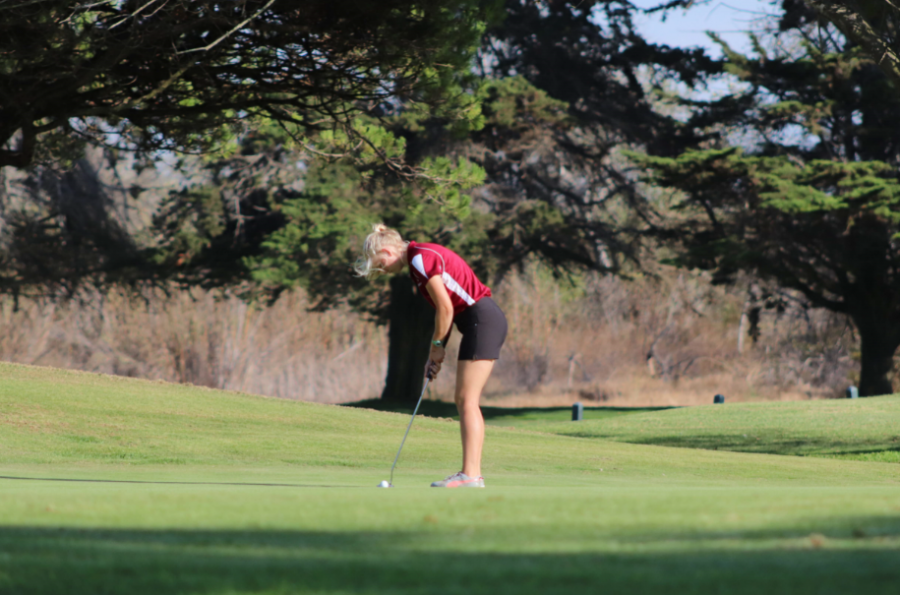 Second to final swing for Anna Pyron '19 during the 8th hole of the match. Credit: Claire Renar / The Foothill Dragon Press

Kelly More ‘20 commented on the team’s victory by saying that the team “destroyed” the other schools.

More also believes that the team has improved since their last season. She specifically remarked on Riley Singleton ‘21 by saying Singleton “has been improving” a lot, which makes More “extremely proud.”

More also credited Anna Pyron ‘19 with a “really beautiful shot” that she had made during the match: Pyron had shot a ball in the water on a par three, had one stroke to make it in for par and she chipped it in.

Sammy Fenton ‘20 has also seen the Dragons’ improvement in their scores because their goal was “to shoot under 200 at least one round and this year and we’ve done that every round so far.”

Fenton also stated that Paris White ‘19 “definitely helped” the team with her individual score of 36.

Going into league, More felt that the team had some room to improve on their “higher clubs” by being more focused, but that the team played really well, overall.

More also predicted that the level of their opponents in league will be comparable to last season, despite some new teams being added. However, she hopes to play more difficult schools as well.

More said that Head Coach Janey Dunn will be setting up a tournament with Oaks Christian, whose scores are similar to Foothill’s.
The team will compete again on Tuesday, Sept. 4 against Oak Park High School. The match will take place at the Buenaventura Golf Course.