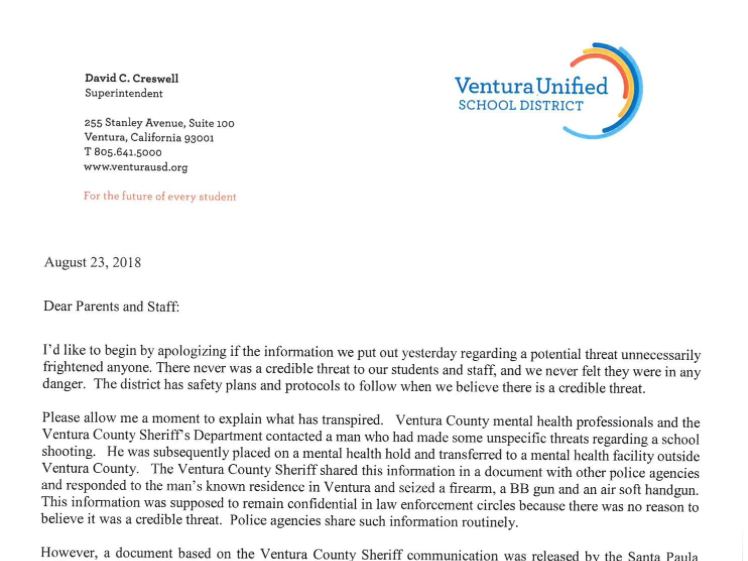 A week after a school safety concern arose regarding a possible school shooter threat in Ventura County, the Ventura Police Department (VPD) Chief of Police Ken Corney attended the school board meeting on Tuesday, Aug. 29. He addressed a byproduct of the inherently stressful nature of the situation: the miscommunication between the Ventura and Santa Paula Police Departments, district and parents.

On Wednesday, Aug. 14, the VPD received a call from the Ventura County Sheriff’s Department (VCSD) concerning a notice they received from a therapist office in Camarillo; a client they were working with had expressed thoughts about committing a school shooting.

“He was very vague and more fantasized about it, then felt bad about it,” Corney said in the meeting.

Corney assured that “the therapist did absolutely the right thing by reporting it to the sheriff’s department.”

The VCSD brought the patient and the patient’s mother to the local hospital, then called in the Ventura County Behavioral Health Crisis Team to conduct an interview with the individual in question. After the interview, the crisis intervention mental health professionals decided to place a 72 hour mental health hold on the 18-year-old.

During the interview, the VCSD learned that there were guns in the home. The mother had taken the weapon out of her house and placed them in the trunk of her car, which has now been seized by the VCSD. After acquiring consent to search the home for any other weapons and ammunition, they discovered a BB gun and an airsoft gun, which were apprehended as well.

Because of insurance and capacity issues in Ventura County, the subject was transferred to an institution in another county for the 72 hour hold. The former Ventura Unified School District (Ventura Unified) student was not released until the following Monday, Aug. 20. At this time, mental health professionals deemed that the individual was not a risk.

The VPD stayed in contact with other county police departments and their respective sheriff’s departments, regarding the person’s release from the hold.

“We followed up by sending officers to the home […] and extensively interviewed both the youth and the mother,” Corney stated. “We determined there was no need for any further action.”

He furthered: “We always put care on the safety of our youth, but we still have to do it in a way that’s responsible and not cause panic and hysteria.”

On Aug. 14, the VCSD sent a “law enforcement only” flyer to various county police departments describing what they had done up until that point, concluding with the 72 hour hold. This flyer is not the same as one prevalent on social media—the notice that reached the public was edited and reprinted by the Santa Paula Police Department (SPPD).

On Wednesday, Aug. 22, without communication to the VPD or the VCSD, the SPPD felt it in the best interest of their school district if they shared a reprinted flyer bringing awareness to the supposed threat and asking it to be kept confidential.

“We all know what happened after that,” Corney said. “Instead of being kept confidential, it went viral on social media and we were put in a tough position.”

The SPPD did not have the relevant information needed to know the threat was no longer credible.

“We made the decision based upon our work and our investigation not to share that flyer with [Ventura Unified]. The threat was no longer credible, it no longer existed and we were confident in our decision,” he said.

Corney said that it’s not unusual to investigate multiple threats of this nature every school year.

Furthermore, he said that the VPD’s relationship with the school district is “as good as it’s ever been,” so they often work alongside one another in preventative actions towards such situations.

Over the summer, the VPD completed training on school shooting responses and other school safety issues; they have established school safety and school lockdown procedures for every school and are continuing to improve these.

Superintendent David Creswell explained the incident from the district’s point of view.

“One of the pieces of information that was assumed and completely untrue was that we had prior knowledge as the school district,” Creswell stated.

Creswell did not know about the incident until Aug. 22, when “flyers almost started falling from the sky.”

Initially, he assumed it was a hoax, as it seemed unreasonable to “print this and have the school district not know about it.”

Based off of the information of the situation Creswell had, which was that the threat was no longer credible, he sent out a call to the parents of Ventura Unified attempting to clarify the situation to the best of his knowledge. However, the reports Creswell received evinced that this instead caused panic and concern among parents.

The next day, after obtaining more information about the situation, Ventura Unified released a formal letter to all the parents.

Creswell reiterated Corney’s message of taking these incidents very seriously and promised to communicate more of what the district has in place in regards to safety, what they are currently working on and where they hope to be in the future.

“We should be scared, we should be concerned, but the outcry that we have heard from this community about concern and willingness to do things to protect the children shows you that we can be different,” Corney concludes. “We can make sure that it doesn’t happen in Ventura.”