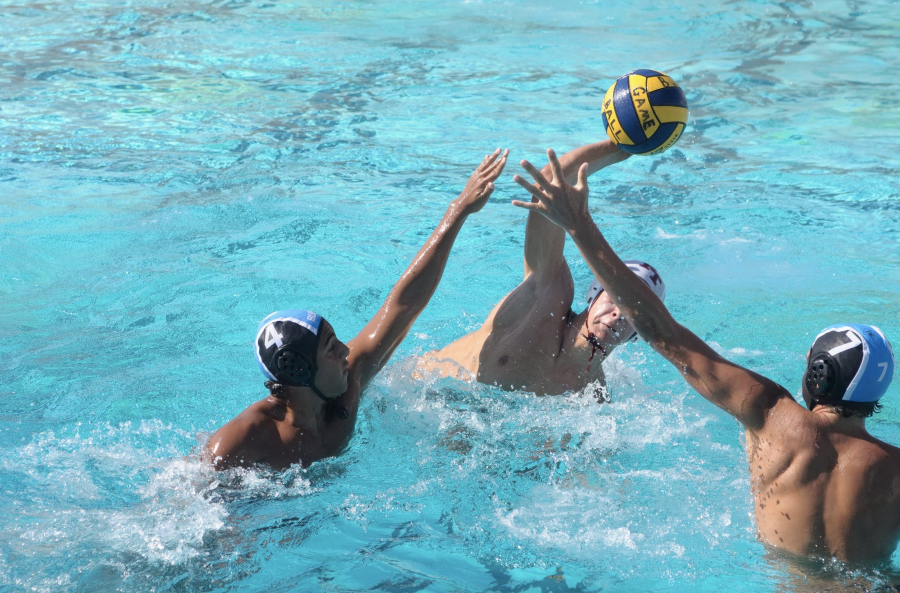 Nikolai Haynes ‘20 gets the ball past multiple defenders and shoots it. Credit: Muriel Rowley / The Foothill Dragon Press

On Tuesday, Aug. 28, the boys’ varsity water polo team faced the Bulldogs of Buena High School in a non-league exhibition game. It was a tale of two halves at Parrish Pool: The first half yielded only one combined goal between the two teams while ten total scores were tallied in the latter half. In a close game, the Dragons eventually pulled away on a late goal, securing a 6-5 win.

Notably, it was the first time that the water polo squad had the opportunity to play any high school team in the Ventura Unified School District, with the exception being a 6-3 victory over Buena during a tournament in 2017. For Head Coach David Wallace, it signifies yet another milestone that this young program has achieved and another foundational point to keep building on.

“What it does for us is gives us a little confidence,” he said. “Every year we’re getting a little bit better and we can compete with just about anybody in this area, so we just got to keep plugging away and keep getting games under our belt and we’re going to get better as the season goes along.”

It took nearly 13 minutes of play for the first shot to get past either goalkeeper. It was Buena’s goalkeeper who allowed the lone score of the first half and it was Ian Canby ‘19 who broke the ice with a backhand shot. Missed opportunities and going up against a strong defense can often times be a recipe for disaster, but Zion Denzel ‘19 explained that the guidance of Wallace helped the team maintain their poise.

“He just kept saying we needed to slow it down, pace ourselves; we needed to make sure that we’re thinking before we just pass the ball,” he said. “So just make sure we’re using our heads instead of just going all out, because that’s the big thing: if we don’t use our heads, then we just fall apart as a team.”

Both teams came out firing in the second half, however. It took Denzel less than a minute into the third quarter to put the Dragons up 2-0. Nikolai Haines ‘20 and Tyler Liddell ‘19 each scored in the following six minutes, but Buena struck four times in that same time period, bringing the third quarter to a close with the two squads deadlocked at four goals apiece.

To start the fourth quarter, Denzel once again scored in the opening minute to help Foothill regain a 5-4 lead. The one goal advantage was short-lived, however, as the Bulldogs tied the score just 20 seconds later. With two and a half minutes to play, Haines then scored the game-winning goal.

Haines described the feeling of recording the go-ahead score as “great,” especially considering the circumstances.

“We sort of lagged a bit in the second half but we were still able to pull it off,” he explained. “It was what the team needed so I tried as hard as I could.”

For Denzel, the win served as a reassurance that the team has not lost a step from its largely successful 2017 season.

“Coming out of a year with Andres [Coppa ‘18] and all the seniors that had left us, it’s good to know that we can still beat a team that we beat last year too,” he said. “And even though it was a tougher game than it was last year, we came out on top and […] we got good looks, we were solid on offense and everything.”

The Dragons’ next challenge comes in the form of a road game against the Scorpions of Camarillo High School on Wednesday, Sept. 5.