The music of “Pomp and Circumstance” filled the gymnasium, programs fanned through the hot air and watchful eyes looked for loved ones—all of whom were walking down the aisles to take their seats. Foothill’s 16th graduating class was officially graduating.

Before the ceremony, seniors were all collectively excited to start the rest of their lives.

Ella Growdonstark ‘18 said, “I’m excited for it to get going. There’s been a lot of anticipation, but I’m not nervous; I’m excited.”

“As long as you’re excited about leaving high school, people are overall very happy to be leaving and going on to the next part of their lives,” Spencer Selleck ‘18 observed.

Seniors began entering the building, and as they walked down the aisles, they met in the middle with an elaborate handshake or just an excited smile.

Once the seniors were seated, Senior Class President Julia Fickenscher ‘18 greeted her fellow dragons, who she said composed a “unique” class.

Referring to the Thomas Fire, Fickenscher continued, “when we returned from the long-term break, the [bond] between us was unlike any before.”

The National Anthem was then performed by Erika Michelle Gurrola ‘18, followed by a speech from Principal Joe Bova. He took time to greet this years’ League of Inspirational Heroes. These 78 people were requested by seniors who chose to invite these individuals because they had an inspirational impact on their life.

Bova also took time to thank the “family, friends and Foothill staff for [their] involvement and support.”

“The class of 2018 has [maintained] Foothill’s reputation and merit in excellence by helping the school rank among one of the top schools in the state and nation,” Bova stated.

“The seniors have changed Foothill in so many positive ways and I know they will have the same effect on the world in tandem,” Bova said.

98 percent of Foothill’s seniors are attending a college, university or training academy in the fall. Whether it was University of Santa Barbara (UCSB), Baylor University in Texas or University of Manhattan, these various universities reached out to over 21 states across the United States.

The class of 2018’s test scores helped Foothill rank 170th out of California’s 1,800 high schools. Foothill was also recognized as a 2018 Golden Medal school by U.S. News, ranked in the top 1 percent across the 31,000 high schools in America and ranked 183 among every high school in the nation.

Thirty-five students are members of the Bioscience Academy’s Cohort 12—every member of which is attending a college or university in the fall. Seventy percent of them are pursuing a major in the science or medical field. Six students were members who helped first pioneer the D-Tech Academy. Twenty-two seniors served Foothill as Associated Student Body (ASB) leaders.

The class of 2018 has collectively served over 35,000 hours of community service. Examples of community service included but are not limited to tutoring, camp counseling, building homes with Habitat for Humanity and providing support at the Community Memorial Hospital (CMH). Thirty-four seniors completed 225 hours or more of community service, earning the Dragon Service Plaque award. Lily Hargett ‘18 was specially recognized for maintaining excellent grades while also spending one-thousand five-hundred hours dedicated to community service.

Bova then concluded by encouraging seniors to live a life filled with happiness.

“Don’t be caught up in a firestorm in this polarizing society with an epidemic of negativity,” he said. “Bring love, joy and hope wherever you go.”

Quoting childhood cartoon character, Spongebob Squarepants, Bova said “laugh out loud all day without any reason, and annoy all the mean people with your happiness.”

The next student speech was orated by Taylor Wreesman ‘18. “A Class of Survivors” congratulated the class of 2018 for their strength throughout their four years.

“We took risks guys, and we did the things that personally would have scared freshman me beyond belief,” Wreesman said to her class.

Superintendent David Creswell advised students to use all of the “strength and education” that they have learned over the past 13 years from their school and home to grow and inspire others in the future.

After being officially accepted as the class of 2018 by Creswell, students stood up by row to receive their diploma. Seniors’ names were read by teachers Josiah Guzik and Brooke Schmitt. The students’ senior portraits flashed on the screen, a picture with Bova was taken and diplomas were awarded.

Bova then moved the gym to stand in respect during his tribute to former Campus Supervisor Dana Eaton.

“Dana was the voice of Foothill and his daily bulletin announcements were legendary, […and] he formed close, long lasting relationships with both students and staff.” he said.

Bova directly quoted Eaton: “Love one another—don’t wait. Make sure your loved ones know that you love them. Laugh, love and be happy. When your feet touch the floor every day, thank God[.] Make it a great day or not, the choice is yours.”

Perhaps in one of the most powerful moments of the ceremony, Bova voiced a request: “Dana would never go for a moment of silence, so can we congratulate him on his graduation by making some noise for him right now?”

Through Eaton’s passing and through the destruction of the Thomas Fire, Foothill’s class of 2018 has stood together during unimaginable hardships. Rightly so, the senior song, performed by Colin Boyle, Grayson McCoy, Julia Fickenscher, Jaqueline Fregoso, Aubrey Paul and Te’a Whitney ‘18 was “Stand by Me.”

Alaina Hooks delivered a speech titled “What We Have to Hold On To” where she reminisced of the thirteen years before today.

Hooks pointed to the strength of the graduating class, bringing to light that they “have been through California’s largest wildfire right in the middle of our senior year; some of us lost our homes or were displaced and we spent five weeks apart, but in those five weeks I believe that we became the class that supports and cares for each other.”

In the widely-anticipated moment, School Board President John Walker led the seniors in the turning of the tassels. Caps were thrown high into the air where they fell back down accompanied by streams of confetti.

Seniors were given a last hurrah from the iconic “Column of Colors” where they were allowed to say goodbye to the teachers they have gotten to know over the past four years.

After officially becoming a Foothill Graduate, Paul Marcoux ‘18 said he was “a little bit sad, but definitely excited.” He loved “being around his entire class again, because of the four years you have with them.”

“It’s a very big sense of family right now,” Chad Talaugon ‘18 said. He predicted that “the hall of colors [will be] the most emotional, but most meaningful part.”

Talaugon concluded, “I’m sad to leave Foothill, but I’m excited for the future at the same time.” 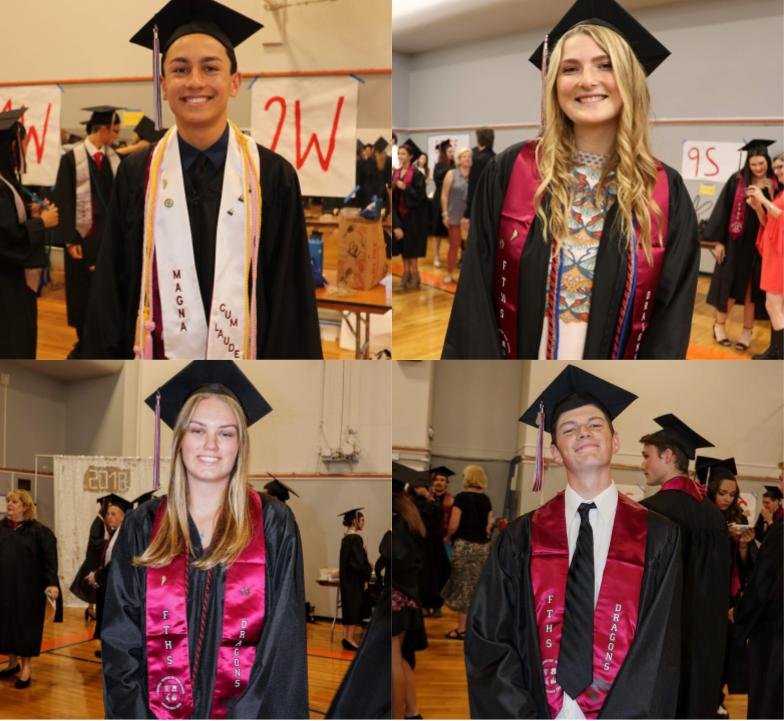