The Foothill Dragon Press • May 17, 2018 • https://foothilldragonpress.org/263772/feature-stories/foothill-student-athletes-react-to-approval-of-baseball-field-at-data/

Foothill athletes react to approval of baseball field at DATA 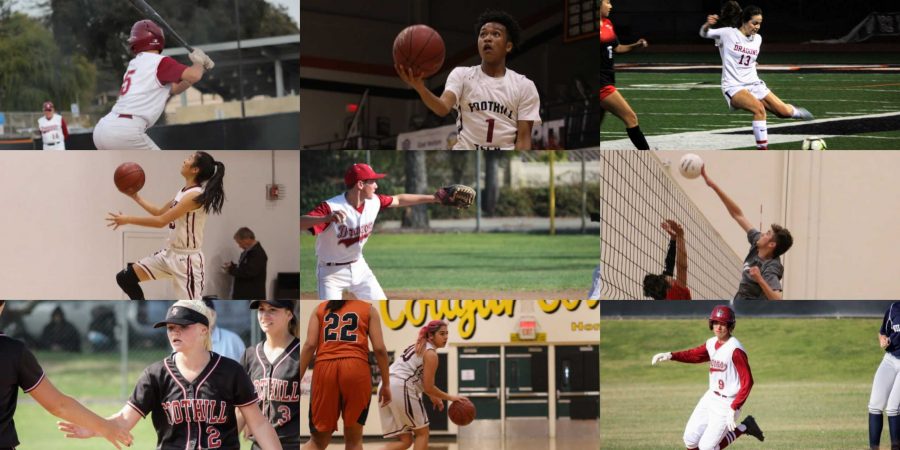 These students hold varying opinions about the approval of the allocation of $170,000. Credit: Abby Sourwine / The Foothill Dragon Press

The Foothill Technology boys’ baseball team has found a new home. On May 8, 2018, the Board of Education unanimously approved a measure that would refurbish a field at DeAnza Academy of Technology and the Arts (DATA) for Foothill use. The requested renovations amount to approximately $169,000.

The baseball players themselves have conflicting opinions about the measure. Dillon Gallagher ‘19, Tyler Hong ‘20 and Victor Valencia ‘19 shared their overall outlook of having a new place to play their sport.

Although Gallagher is “excited for a new field, I’m a little upset due to the fact that the field has taken this long to even begin its construction.”

“Considering we were all told it would be ready before our season this year, I’m pretty sympathetic towards all the seniors this year that won’t get the chance to play on it,” Gallagher said. “They were there from the start and never got to play on an actual field for Foothill itself. I’m just glad that I will hopefully get the opportunity to be playing on the field next year.”

Valencia mentioned that the baseball field proposal has been “rejected in the past and I am not in any shock that it got passed the second time upon request.” However, he feels a sense of inequality among sports, which would later be reflected by students from other sports as well.

“It is very selfish that only baseball will have their very own stadium and not other sports. What was needed most for baseball this season was transportation, not some field that will be built in a year or two,” Valencia said.

Hong feels like the field “was definitely needed for [the] team.”

“Having our own field means that we can practice at any time without worrying about other teams or people needing or wanting to use our field,” Hong said. “Therefore, this positively affects our team because having some place that we can call ours will be comforting and exciting.”

Valencia concludes that “the field being made will have a positive outcome for the baseball program and athletes.”

A varying amount of initial responses arose upon hearing the news because athletes at Foothill feel a bit blindsided by the approval of the allocation of funds. Although the measure was discussed in regular session during Board of Education meetings and appears on the public meeting minutes, not many were aware that such a decision was up in the air until after its approval.

Anna Pyron ’19, a player on the Foothill’s girls’ golf team, remarked that Friday, May 11, “was the first I’ve heard of ” the new field. Similarly, Mason King ’19 “had heard nothing of it” until Friday. Furthermore, King believes he had a right to be informed about the baseball field: “I am an athlete and I am a student.”

King is not completely opposed to the field but wishes it had happened a bit differently.

“I guess I can see their reasoning behind it, but it would be nice for them to tell people and then maybe to also allocate more budget spending on other sports rather than just like $170,000 for just baseball. That’d be nice,” he said.

Jamie Dietz ‘19, a member of the Dragons’ softball team, said that the news “comes as a surprise” to her.

Track and field head coach and English teacher Jason Dinkler was also out of the loop, and he feels that the importance should be stressed so that a disconnect like this won’t reappear in the future.

“Because I didn’t know about it at all until [Friday], I suppose that’s an indication that there needs to be more information and it should be given to us ahead of time,” Dinkler said.

Dinkler would have liked to have heard something along the lines of “‘here’s what’s happening and here’s the plan and here’s how you matter as a school. The athletics program at this school matters and here’s how we’re going to work on making it something that’s important for the long term so that your kids—if they come to Foothill or whatever—that’s part of the plan.'”

Meanwhile, cross-country/track and field runner Blythe Blakeman ‘19 said she is “sure” that the athletic counsel knew about the baseball field and remarked that “it’s kind of their job to tell” students about it.

“I feel like the whole school should have a right to know because if we’re getting new facilities, isn’t that something to be proud of? Since nobody knows about it, it’s kind of weird and covered up like they’re ashamed that they’re doing that,” she said.

Golfers Hannah Hart ‘20 and Aiden Donnelly ‘20 “had no idea it was coming” but are not completely opposed to the notion.

“I feel fine about it; I think it’s a good thing,” Hart said. “We play golf so there’s not really much they can do for us. They can’t, like, pay to buy a golf course.”

Donnelly agreed, saying that he doesn’t “really care where I play golf,” but acknowledged the fact that Foothill golf does not have “a specific place to call home.”

“It feels kind of weird playing on a course with some other school’s name on it,” he explained. “It’s kind of like a strange feeling even if you forget about it after a while.”

The athletes wasted no time identifying potential problems and inequalities that may arise as a result of the new baseball field.

Members of the boys’ basketball team were taken aback by the news. For these athletes, the initial reaction was one of confusion.

Questions of “why?” resonated around the group of boys’ basketball players including Cameron Strain ‘18, Trey Jackson ’18, Iak Wright ‘19, Andrew Orm ‘19 and Ian Ingram ‘19.

In Ingram’s opinion, Foothill’s baseball program “brings in the least amount of revenue [in comparison to] all the other sports.” Ingram bases his claim off the fact that the baseball team does not charge admission to regular season home games, thus creating less of a profit in comparison to basketball or volleyball.

Jackson agreed, adding that “the first people that should have a facility are girls’ volleyball because they bring in the most people.”

Strain’s solution, although significantly more expensive, is to “build a stadium, like a gymnasium, so that it could be a multi-use area: basketball, volleyball [and physical education classes] could go down there.”

“Honestly, if you’re going to put money to use, you should work to benefit the most amount of people,” Ingram replied. “So if baseball brought in the most amount of people, to play that individual sport, that would make sense. But like [Jackson and Strain] said, you would not only be able to get basketball people in, you would be able to get volleyball people in- so you could just change how the court is set.”

Miles Harvey ‘19, a member of the boys’ varsity volleyball team, stated that the construction of a gymansium “would benefit multiple programs [such as] boys/girls volleyball, basketball—all of which perform consistently and maintain decent followings.”

“I’m pretty sure this is our first actual location that will be meant for Foothill [athletics],” he said. “So that’s nice, for the school […] and the baseball program, so I have nothing against it.”

Abby Bova ‘19, the girls’ varsity basketball team co-captain, eventually came to the conclusion that it was logical for the baseball team to “get first dibs on a new facility.”

“Part of me was kind of excited because it meant that we’re […] getting our show on the road in the sense that we’re getting facilities, but then I was kind of wondering why baseball was chose[n], which then got explained later,” she said. “Boys’ baseball doesn’t really have set practice times and it’s really hard for them to find times and facilities […] so knowing that, it’s understandable.”

Similarly, fellow girls’ basketball team co-captain and former softball player Cydnie Gutierrez ‘19 felt that the addition of a new baseball field would be a positive one.

According to Gutierrez, baseball needed their own field “because I know the struggles that they have been going through the past few years—mostly just practice time and transportation,” she explained. “I feel that the sports I’ve played have already set where we play, and baseball hasn’t, and they needed one, and they’re getting one.”

Marina Peacock ‘19, a member of the varsity girls’ soccer team, was “surprised and a little confused,” mostly because of the location of the venue.

“It seems kind of far to build a field there and I don’t know that the baseball boys will be too happy about having to drive all the way to DATA,” Peacock furthered. “It’s difficult to schedule practices and games with the college and softball needing the fields, but still slightly baffled as to why they’re planning for it at DATA. I think it’s awesome that they granted money to be able to build a facility for our baseball team, just maybe it could’ve been in a better location more convenient for the boys with transportation.”

From the girls’ varsity volleyball team, Lexi Malone ‘19 expressed that she’s “excited” for the baseball team. But at the same time, Malone is dissatisfied that her team will continue to “have to play” at Cabrillo Middle School’s “really old” gym.

She also mentioned the fact that the baseball team took the extra step in consulting the Ventura Unified School District (VUSD)— something that her team has yet to do.

Malone has heard of her team “pushing for new stuff but I mean, obviously, I don’t think [girls’ volleyball is] going to get anything anytime soon.”

“But I mean I’m happy for them, like good for them. At least one can get [a facility],” she said.

Pyron stated that the institution of a field “is good for baseball, as well as the rest of the Dragons’ athletic program.”

“I think for athletes, in general, this is a pretty big deal, coming from a school that we literally have no facilities,” Pyron said.

Boys’ golf coach and math teacher Wayne Powers, however, said that he’s “never been one of those people who thinks that fair is always equal.”

“I’ve learned in my life that something can not be equal but still be perfectly fair,” he said. “If the baseball team needs their own baseball field, that should sort of stand separately. I don’t think ‘if they get $170,000, I should get $170,000 too because I’m coaching a team.’ That’s never been my thing.”