The Foothill Dragon Press • May 15, 2018 • https://foothilldragonpress.org/263675/sports-3/yuvraj-narang-exemplifies-passion-leadership-and-insane-work-ethic/ 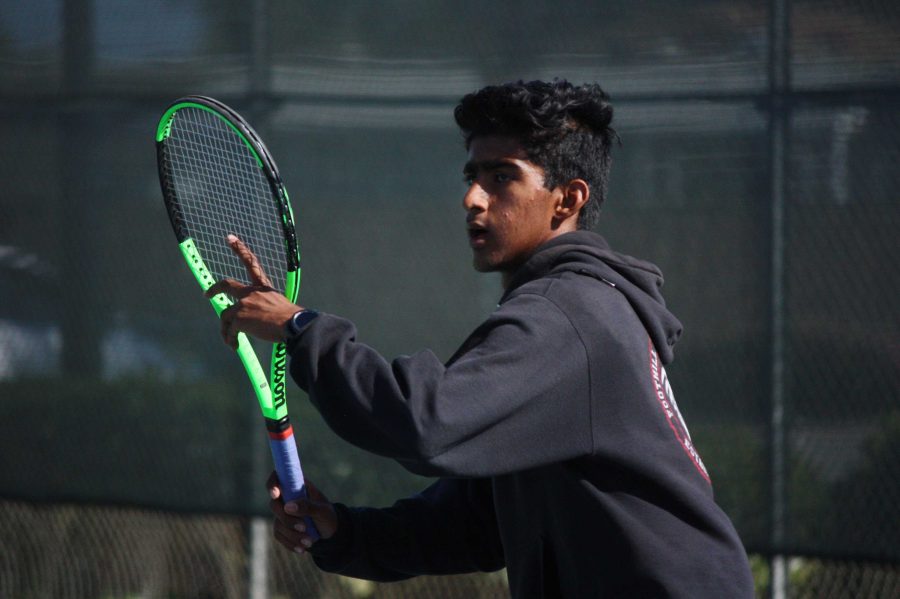 Yuvraj “Yuvi” Narang ‘20 is described by his assistant coach, Ryan Rollins, as “the type of athlete any coach would want.” Rollins elaborated that “he’s always trying to improve himself” and that level of commitment is what sets him apart.

Narang has played tennis for roughly seven years and his reason for choosing the sport is simple: “My main goal when I was young was to play every sport and then just play whichever one I was best at, and tennis was the one.”

“It really lets me use my creativity in points,” described Narang. “I just have a lot of fun with it.”

This “creativity” is what Rollins would say gives Narang such depth; “he has developed his shot variety enough to be able to adapt his game to best win the match from [any] given opponent.”

Teammate, and fellow co-captain, Ethan Wang ‘20 commented that “Yuvi is very competitive, sometimes maybe a little bit too competitive,” and this desire to win is demonstrated through his work ethic.

“After the team’s practice, [nine out of ten] times he plays for another two hours somewhere else,” said Rollins. Narang stated that his average practice time is three hours per day.

Wang described how some days Narang would run off to Los Angeles to participate in some other tournament after already playing with Foothill for several hours.

So far, Narang hasn’t lost a set for Foothill all season, and easily earned first place in the Individual League Finals. However, outside of Foothill is where he faces more challenging opponents and embrace his competitive side.

Despite playing singles for Foothill, he mentioned that “in tournaments outside of school on the weekends I play a lot of doubles for Southern California,” adding that his skills with volleys makes doubles more fun for him.

Narang’s impact on the Foothill team expands past just guaranteeing three wins every match— he’s also a leader. His drive and motivation is contagious; Rollins feels that one of Narang’s greatest strengths is “showing off his love of the sport to the team which helps them start loving the game as well.”

Additionally, Wang noted that Narang “cheers everybody else on.”

“I try to help others improve, as our [head] coach isn’t available all the time,” said Narang. He and Wang end up helping quite a bit with teaching their less-experienced teammates.

Even off the court, Narang is hard-working. He is a member of the Bioscience program and is a prime example of Foothill’s ideal “student-athlete,” as he is able to be committed to an intense training regimen for tennis without sacrificing his academic career.

“I have lots of homework but I try to finish as much as I can at school and then on the way to tournaments I’ll do reading in the car,” Narang explained.

Though tennis is not the only important aspect of his life, it’s likely that a large portion of Narang’s future will be spent on a tennis court. Even though he still has two more years of high school, Rollins thinks Narang could currently play for a Division 3 college team. He also added, “I fully believe he will want to try out for a Division 1 team.”

“I can see him loving the sport of tennis the rest of his life [even] when he’s 80+ years old,” concluded Rollins.