The Foothill Dragon Press • May 3, 2018 • https://foothilldragonpress.org/263598/sports-3/trouble-with-doubles-causes-13-5-loss-for-boys-tennis-against-carpinteria/ 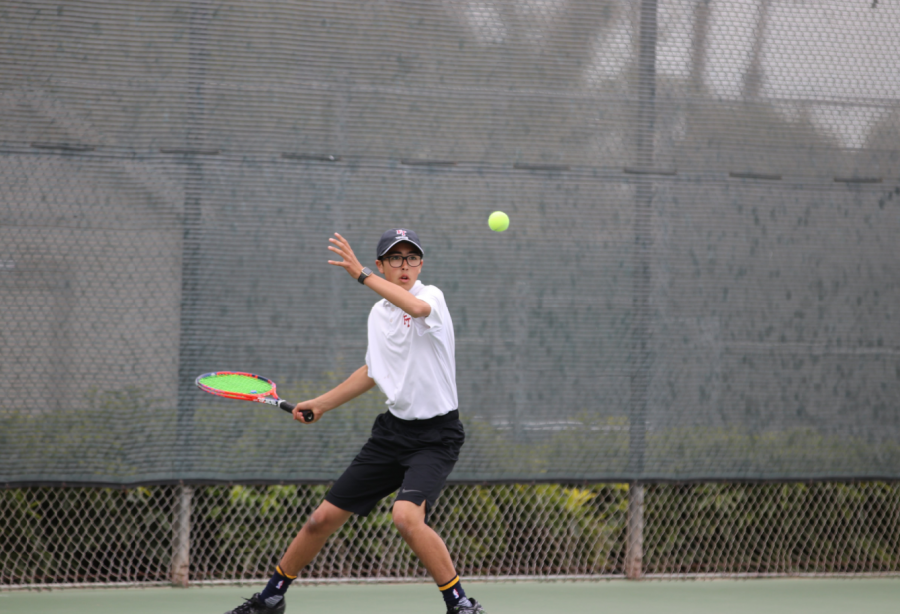 Ethan Wang '20 with his eyes on the ball. Credit: Olivia Sanford / The Foothill Dragon Press

Having lost to Carpenteria earlier in season, assistant coach Ryan Rollins said “we played kind of as expected” and that “it was gonna be difficult in the doubles no matter what,” though the “whole team showing up would be useful.”

Narang finished with three wins: 6-3, 6-0, and 6-0, completing this season undefeated: he didn’t lose a single set. He said he actually struggled at first; “My strings were really close to breaking, but I got used to that and I started playing better and better.”

Wang, like Narang, handily beat his first and third opponents. However, in his set against Carpinteria’s number one singles player, he lost 7-6 in a tiebreaker.

“We traded games and it really just came down to who could serve better,” Wang said. However, he “got a little nervous at the end” and couldn’t deliver. Despite the loss, he felt he “played pretty good” in that second match.

His teammate Narang would agree, noting that “he’s been playing a lot more aggressive,” and Rollins was proud of Wang’s performance as well.

Narang commented that “this is probably the hardest competition we have in our division so [today] we have a lot of good matches for everybody.”

The last event of the boys’ tennis season is the individual league finals held at Carpinteria on Thursday, May 3, which Narang and Wang are attending.

Having such a young team, Rollins is optimistic about the upcoming 2019 season.