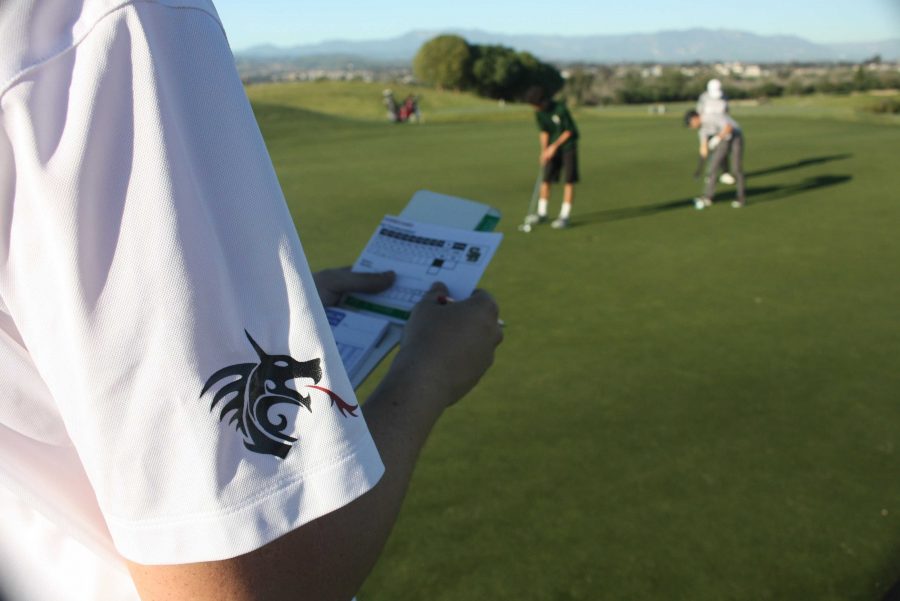 “We won,” Mason King ‘19 said. “Did we really win?” Spencer Selleck ‘18 asked, apparently bewildered by the results. “Yes, we won by one stroke.”

For Selleck, this win was “exciting” and “shocking.”

The boys’ golf team shot a collective score of 427 on Thursday, April 26, during their home match at Olivas Links. After coming in last place during their previous match, the Dragons were especially excited to earn their first win of the season.

Although the win itself was “more than satisfying,” according to coach Wayne Powers, the “most impressive part” was that the team beat out what would have been a three-way tie. However, that one point put the Dragons over the top, leading to a two-way tie for second place between Saint Bonaventure and Malibu High School who both shot a score of 428. Bishop Diego High School then placed third with a score of 435 and Grace Brethren shot 457.

“It was probably one of the most miraculous winnings that I’ve ever experienced, it was amazing,” Selleck said. He felt “good” about his personal performance and was happy with his score of 89. However, he was even more proud and impressed with his team as a whole.

Over the course of the match, Aidan Donnelly ‘20 shot an 80, King shot an 87, Ian McEwan ‘19 shot an 86, Sean Ward ‘18 shot an 85 and Selleck shot an 89. This means that the team shot an average of 85 strokes per player. Selleck and Powers both agreed that it was impressive that five high school students from the same team were able to shoot under 90, especially when you compare that to professionals who try to shoot the standard par of 72.

For Powers, the depth of the team and their conservative approach is what contributed the team’s win.

“They’re not professionals yet,” said Powers, “so […] to try to do the type of golf shots that professionals do is asking for trouble. So I just try to teach them to play within their abilities and not let one golf hole ruin their entire score.”

Selleck feels that competing at home was another factor in the team’s success because they were already comfortable and familiar with the course. It is this sense of comfort and the team’s ability to “have a good time” that he feels will propel them in their upcoming match.

Powers believes that the team needs to keep practicing and taking “baby steps” in order to prepare for their match on Thursday, May 5.

“We’ve been working a lot on conservative play, meaning that to play within your ability level,” Powers said. “I really think that they’ve taken it to heart and I think that that’s what is making the difference.”