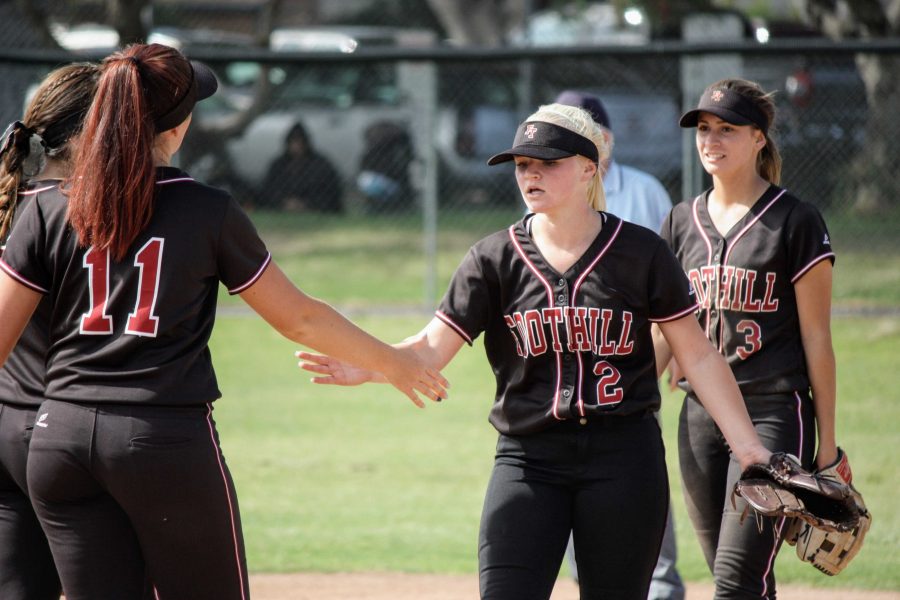 Jamie Dietz '19 and Jade Iannacone '18 high five at the top of the inning before they play outfield. Credit: Gabrialla Cockerell / The Foothill Dragon Press.

For the fans in attendance at Ventura College on Tuesday, April 24, an electric crosstown matchup was in store as the girls’ varsity softball team hosted their league opponents, the Seraphs of St. Bonaventure High School. Entering the game with a league record of 1-3, Foothill had a chance to pull even with St. Bonaventure, whose league record sat at 2-2. However, it was all Seraphs in this one, and St. Bonaventure escaped with a 10-1 victory to distance themselves from the Dragons in the Tri-Valley League standings.

Head coach Jere Dietz remarked on the lack of offense, saying “we need to hit, and we just didn’t hit today at all.”

St. Bonaventure tacked on an early run in the first inning and it only escalated from that point. They followed with six more runs, taking a 7-0 lead into the bottom half of the fourth inning.

The fourth inning was the lone instance where the Dragons would get on the scoreboard. A few errors by the Seraphs and a fielder’s choice led to their only run of the ballgame.

The Seraphs put the finishing touches on a game that had essentially already been decided in the fifth inning. They added three more runs, solidifying a nine run lead. Both sides were blanked from that point on, and St. Bonaventure held on to beat Foothill with a final tally of 10-1.

One of the main catalysts in the Seraphs’ dynamic offense was Rachel Williams ‘21. She went three-for-five, including two doubles and three RBI. In addition, her teammates Lexi Garza ‘20 and Jalen Barron ‘20 each drove in two runs.
Dragons’ starting pitcher Abby Strong ‘19 lasted just one and one-thirds innings while yielding four earned runs. Kat Tafoya ‘19, meanwhile, pitched the remaining five and two-thirds innings and gave up six earned runs.

On the hill for St. Bonaventure was Clarissa Lafitte ‘18, who pitched masterfully against Foothill. She recorded a complete game shutout, scattering only five hits while striking out six.

Lauren Saenz ‘19 noted that Foothill’s pitching was relatively sharp in the loss. Although the pitches were well placed, the Seraphs continuously found gaps in the Dragons’ defense.

“Our pitching was pretty good today, [but] our defense just wasn’t there,” she explained.

According to Saenz, the key to bouncing back against the Seraphs is to “work hard.”

“We’ve just got to get our head in the game and just start working hard and stop playing around,” she said.

Dietz hopes to “turn [the results] around on the next” game versus St. Bonaventure, saying that the girls are “going to have to dig down and see what’s inside [of] them” in order to find success.

The Dragons won’t have to wait long to redeem themselves against the Seraphs, as the next game between the two teams falls on Wednesday, May 9. The second game of the season series will be played at St. Bonaventure’s home field.