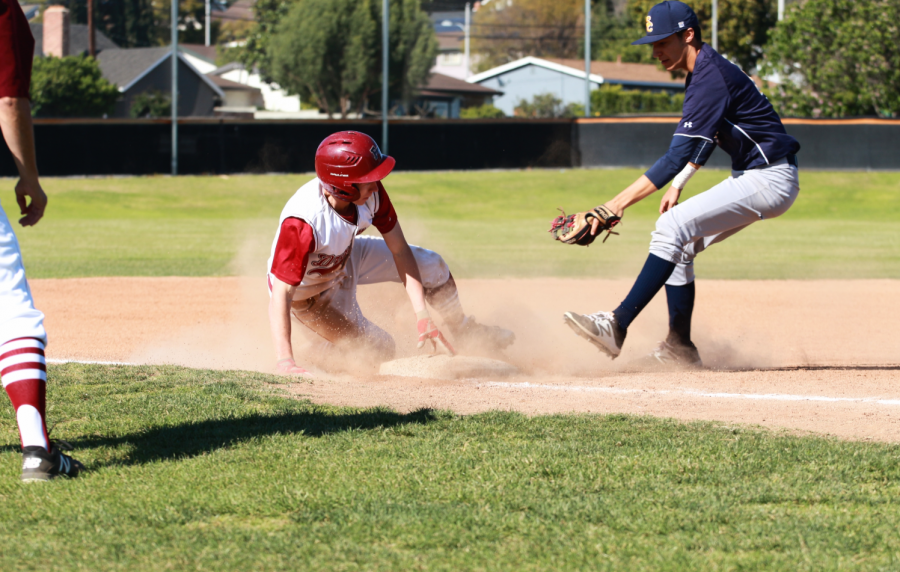 On Friday, April 20, the boys’ varsity baseball team hosted the Saints of Santa Clara High School at Ventura College. Santa Clara, members of the Frontier League along with Foothill, represented a new challenge for the thriving Dragons who held a 3-0 mark in conference play entering Friday.

Trailing for most of the game, the Dragons finally took the lead for good in their half of the sixth inning and emerged victorious with a final score of 7-6. It wasn’t an easy win by any means, as head coach Clint Ellison referenced a late-inning rally by the Saints, chuckling and saying that “these guys keep me on my toes, that’s for sure.”

With the win, Foothill improves to 10-7-1 overall with an undefeated 4-0 record in league play.

Charlie Montano ‘19 registered a remarkable performance and anchored the Dragons’ offense by going three-for-three, including a double, a run scored and an RBI. In addition, Montano was credited with the win after taking the mound in relief of the starting pitcher in the third inning.

In the first inning, the Dragons jumped out to a quick 1-0 lead. After Tyler Hong ‘20 walked and eventually advanced to third, he was able to score after Troy Lindemann ‘18 was caught in a rundown.

The Saints’ response was a string of four unanswered runs throughout the second and third innings off of Foothill’s starting pitcher Evan Nichols ‘21, who was replaced by Montano during the top half of the third inning. Nichols lasted just two and one-third innings while yielding four runs; two of which were earned.

With the score sitting at 4-1, the Dragons slowly clawed their way back into the game. An RBI double by Montano which scored Lindemann from second base cut the lead to two in the fourth inning. However, Santa Clara responded an inning later with a run of their own, regaining the three-run advantage.

In the fifth inning, Trey Casswell cut the lead to two runs once more with an RBI single. However, it was the sixth inning where the knockout blow was delivered to Santa Clara. Four runs crossed the plate for Foothill and gave them a lead which they wouldn’t relinquish.

Fresh off the four-run outburst in the sixth inning, Dillon Gallagher ‘19 was called on in the seventh inning to close the game. With a two-run lead, Gallagher allowed one Saints runner to cross the plate but was able to hold the tying run at third base. A casual fly ball was the finishing touch as Gallagher recorded the save and the Dragons secured their 7-6 comeback victory.

Ellison credited the win to his team’s ability of “just playing basic baseball,” adding that “we had several bunt plays where they couldn’t field it, couldn’t make the play [and] we just capitalized well.”

Gallagher elaborated on his coach’s outlook by explaining that “small ball got us the [win]” and that “taking advantage of the little opportunities really helped us.”

Next up for Foothill is a road game at Thacher School on Friday, April 27. As Thacher is a member of the Frontier League, the Dragons will aim to continue their undefeated league season with a fifth straight conference victory.