Gun laws, student voices and everything in between 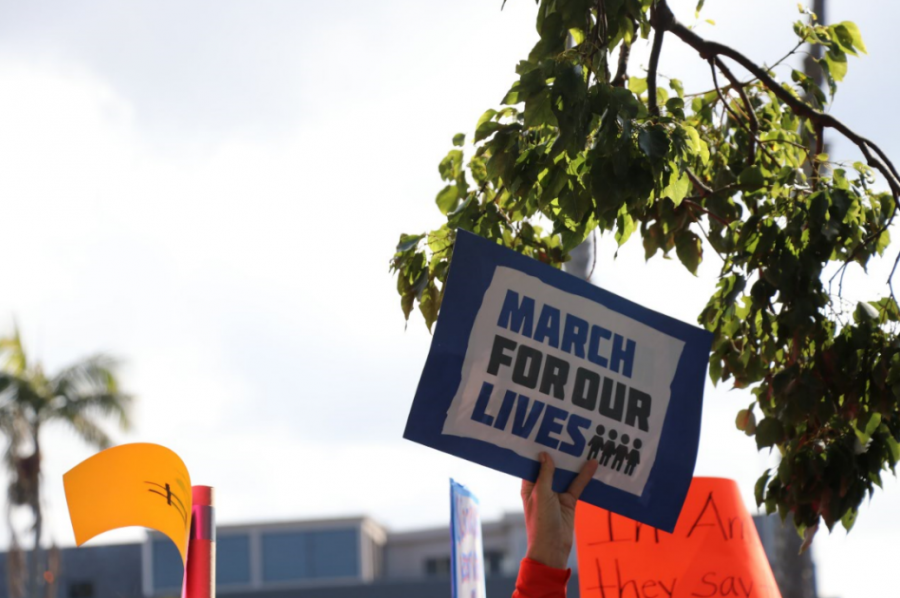 On Feb. 14, 2018 in Parkland, Fla., 14 students and three teachers at Marjory Stoneman Douglas High School (MSD) lost their lives at the hands of an active shooter, and there has yet to be a calm to the storm of activism by MSD students and other students nationwide.

According to BBC, “[the shooter] is suspected of using a legally bought AR-15 semi-automatic rifle to carry out the 10-minute attack, gunning down teachers and students.”

However, the response to the shooting has been lasting for much longer than 10 minutes. Jose Iglesias ‘18 and Lewis Mizen ‘18 are students at MSD, and survivors of the shooting.

Iglesias was in AP Government before the first shots were fired, discussing the amount of power certain organizations are permitted to have. One organization they focused on was the NRA, and ironically, students of MSD are now conducting a movement that is pushing for stricter gun laws, directly opposing the NRA’s stance on the matter.

After hearing the fire alarm and thinking the ringing merely meant another drill, Iglesias and his fellow students bustled outside. However, he felt there was still something incredibly strange about the situation.

“Through the walkie talkies, I [heard] gunshots,” Iglesias said.

Even then, some people were walking while others sauntered through the exposed parking lot area. Iglesias stayed in the middle, power walking and trying to keep to himself.

Meanwhile, Mizen and his classmates were hiding underneath their desks. They stayed there for the first half hour until they got confirmation that the situation was real. For the most protection possible, they huddled in a closet for two hours until Army Reserves escorted them safely out.

“There are no words to describe it; the closest I can get is nightmare,” said Mizen.

Eventually, Iglesias and his classmates made it to the softball fields and started taking things more seriously, after seeing seven helicopters appear in the sky.

It took a long time for Iglesias’ class to actually get off campus, and when they did, they ran to a Walmart across the street and into a nail salon.

It was there that they saw the news—their school had been turned into a “war zone.”

“I was in shock. I didn’t understand,” Iglesias said. “Even now, we’re not fine. We’re physically fine, but mentally we’re all a mess.”

“Day by day it gets easier, but it also gets more real as more time passes,” said Mizen.

It has now been almost two months since the shooting. Students are trying to go back to school, and to return to “normal” life.

Currently MSD students have kickstarted a movement that is pushing for stricter gun laws. Though there have been devastating school shootings in the past, many are arguing that the primary reason this issue is finally getting somewhere is due to rising student activism all over America, and even the world.

To those that are joining the “Never Again” movement, Iglesias says to “just keep trying. You will be heard one day in your life.”

Whether for or against stricter gun laws, standpoints are being voiced.

More specifically, Parkland shooting survivors are trying to make it harder for just anybody to obtain a gun by arguing for negotiation of stronger background checks, more mental health checks, raising required age for gun purchase and more.

Iglesias made the connection that “it’s easier to get a gun than to get a driver’s license.”

Foothill students have also participated in the movement. Hannah Yale ‘20 organized a walkout at Foothill as part of the national walkout movement on March 14 that not only honored the lives lost in Parkland, but also became a rallying cry for those passionate about gun control.

There are very strong arguments for both sides of the issue, as students have made clear by involving themselves in or abstaining from participation in the walkout, developing their own opinions and defending their beliefs.

Henry Pick ‘19, though he knows it will most likely not happen, wants to see abolition, while David Holt ‘19 blames the person and not the gun.

Holt argues that guns are primarily used for protection rather than violence, especially among impoverished families.

“A gun is simply just a tool,” Holt said. “Anybody can kill anybody with anything.”

In contrast, Pick saw the incident as frightening. He said, “I don’t see why a law that may [have] applied to this country 200 years ago should still be in effect today.

Nicole Stidham ‘21 also believes gun laws should be stricter. She participated in the walkout and believes that “gun laws should be mended so that only military [personnel can] have them” or that the country should “ban certain types of guns.”

On the other hand, Anna Pyron ‘19 wants things to stay the way they are.

“I’m not pro guns,” said Pyron. “But I just support handling things diplomatically and legislatively. The second amendment is written to protect the citizens against a tyrannical government.”

Students are taking a stand and pushing for their voices to be heard, and despite differences in beliefs, Mizen calls all people to speak their opinion about this issue so that such tragedies may be prevented in the future.

“Everyone has a voice, and age doesn’t matter. If you fight for what you believe and you are justified in your beliefs then you can achieve amazing things. One person can change the world if they are sure in their convictions, and that’s what’s everyone needs to realize.”